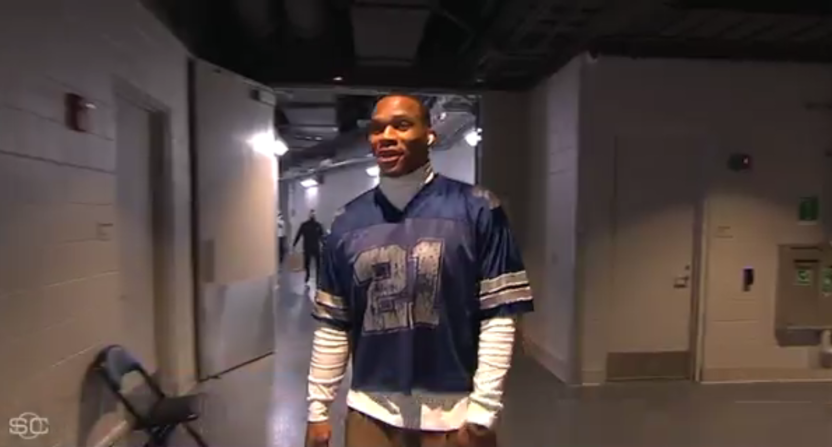 ESPN’s 6 p.m. Eastern SportsCenter Wednesday started with a mistake. The show opened with footage of the Los Angeles Lakers’ Russell Westbrook and the Milwaukee Bucks’ Giannis Antetokounmpo walking into Milwaukee’s Fiserv Forum ahead of their game, and anchor Hannah Storm commented on Westbrook’s jersey. She said that it was a Barry Sanders jersey. (Sanders wore #21 at Oklahoma State, but wore #20 with the Detroit Lions in the pros).

There’s some debate about what Westbrook intended with this jersey.  Michael David Smith of Pro Football Talk tweeted that it was a Dallas Cowboys #21 jersey. Smith thought that was a reference to former Cowboys’ running back Julius Jones, who wore #21 with the team, and that it was in support of clemency for Oklahoma death row inmate Julius Jones (a different person with the same name who is scheduled to be executed Thursday over a 1999 murder, but maintains his innocence, and has been featured in various documentaries raising questions about the case and about the racial issues involved with the police and jury). That makes some sense, considering how vocally Westbrook has spoken out in support of Jones, including in an open letter last summer (ESPN covered that here).  Here’s Smith’s tweet on this:

ESPN showed Russell Westbrook walking into the arena and said he was wearing a Barry Sanders jersey. He wasn't. The real story is more interesting: It appeared to be a Julius Jones Cowboys jersey and a statement of support for the Oklahoma death row inmate also named Julius Jones

However, a photo of the jersey from the back indicates that it has a Sanders nameplate. That would be former Cowboys’ cornerback/receiver Deion Sanders. Here’s that photo:

If this was only a reference to Deion Sanders, misidentifying him as Barry Sanders is a much lower-stakes mistake, and an understandable one. We’ll await comment from Westbrook on what he meant, and if the interpretations (from Smith and ourselves) putting this together with the Julius Jones case were an overreach. (And if they were, we apologize for that.) What is clear is that Storm said this was about Barry Sanders. Here’s the clip of how Storm and co-anchor Brian Custer covered this on SportsCenter:

Storm starts with “Lakers kicking off a five-game road trip. Off the bus, look at Russ! Showing up rocking a Barry Sanders jersey! Love it.” Custer adds “I love that.” Storm runs through the rest of her intro on the game, and the clip ends with Storm saying to Custer “You like that jersey? Cool, right?” and Custer says “I love it. It’s cool.”

If Westbrook’s jersey was a reference to Julius Jones, that’s an unfortunate error from ESPN. If it was only a reference to Deion Sanders, and was not intended to have any connection to the Julius Jones case, that’s a notable error from us in reading too much into it, and we again apologize if that’s the case. (In either case, we apologize for our initial typo in this post that got Barry Sanders’ NFL jersey number wrong; it was #20, not #22.) We’ll keep an eye out for comments from Westbrook on what he intended.

In any case, this all  may prove beneficial in terms of raising further awareness about Jones’ case. There’s been a lot on that front lately, including Kim Kardashian speaking about it and people protesting in Oklahoma and elsewhere. And there’s been a lot in the sports world. For one, Cleveland Browns’ quarterback Baker Mayfield passionately spoke about this Wednesday:

“It’s pretty rough, to be honest with you,” Mayfield said on Wednesday, pausing to gather his thoughts and composure. “That’s not something that’s easy to talk about. Been trying to get the facts stated and the truth to be told for a while, but it’s tough to think about. Tried and tried. It’s a shame it’s gotten this far. We’re 24 hours away. It’s tough. You know, hopefully God can intervene and handle it correctly and do the things He needs to do.”

Last year, as noted above, Westbrook, Mayfield, Blake Griffin, Trae Young and Buddy Hield all wrote letters in support of Jones. So Westbrook’s connection to this is not new. ESPN’s Royce Young wrote the aforementioned detailed feature last summer about why Westbrook and Griffin in particular were supporting Jones. Here’s an excerpt from that:

“[Jones’] conviction was tainted by a deeply flawed process,” Westbrook, the longtime face of the Oklahoma City Thunder who is now with the Houston Rockets, wrote in his letter. “As more details come to light regarding his situation, I join with many voices to express sadness and profound concern regarding his conviction and death sentence.”