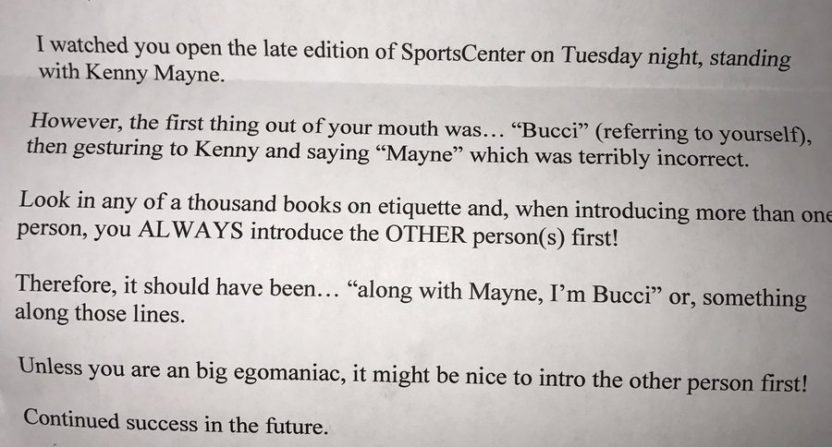 Most people, when they see something on TV that bugs them, mumble something to themselves or the person next to them and then move on. Maybe if the issue is truly egregious, they fire off a tweet or a text. It’s kind of the sports media version of slacktivism.

So we’re very excited to hear about a guy who takes his criticism to the next level, spending time writing and mailing letters to ESPN anchors, critiquing them on their etiquette and their dress.

We first learned of this man (let’s just assume it’s a man) on Wednesday night, when John Buccigross tweeted an image of a letter he had received. The sender was unhappy that Buccigross introduced himself before his co-host Kenny Mayne, arguing that according to “a thousand books on etiquette,” “when introducing more than one person, you ALWAYS introduce the OTHER person(s) first!”

It did not seem to matter to our fearless hero that “Bucci Mayne” is a play on Gucci Mane and therefore would not work the other way around. He was heated.

Well, it turns out that the sender has targeted not only Buccigross but also other offending anchors.

MLB Network’s Robert Flores tweeted that he had received the same letter, and SportsCenter’s Elle Duncan said she’d gotten a version as well.

He sent me that same letter.

This guy has sent me 2 letters chastising me for the exact same thing.. ??

But it gets better. Yet another SportsCenter anchor, Matt Barrie, responded to Buccigross’ tweet with an image of a different hard-copy letter. In this one, the sender asks if “the [sic] have any mirrors at ESPN,” before criticizing, in great detail, Barrie’s outfit.

It seems pretty clear from the use of all-caps, the “regards” signature and the overall haughty tone of the letter that this is the same guy who got on Buccigross, Flores and Duncan for their introduction etiquette.

Bucci came to the same conclusion.

HAS to be the Same guy

We run a website called Awful Announcing, and even we wouldn’t be that harsh on SportsCenter anchors… which makes you think maybe we should pay more attention to the order these guys introduce themselves. Or, you know, just offer this letter-writer a job.