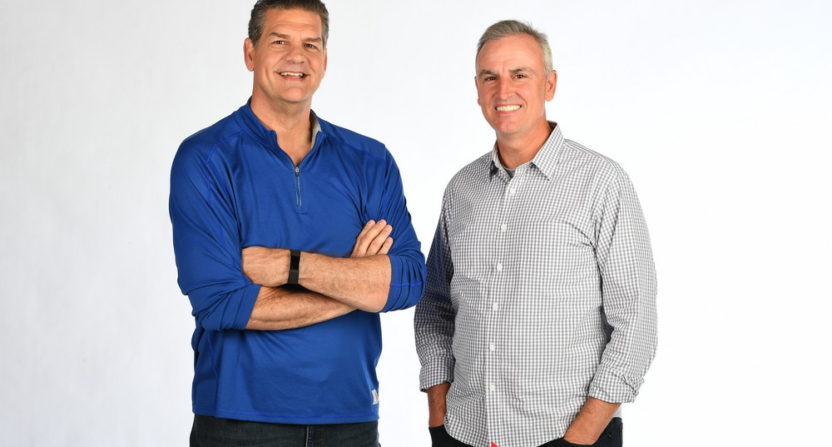 After over 17 years on ESPN Radio and 13 years being simulcast on television, Mike Greenberg and Mike Golic— the personalities and voices behind ESPN’s flagship radio show Mike & Mike— signed off for the final time last Friday, ending one of sports radio’s most enduring and unique partnerships. On Monday, longtime NFL studio host and Mike & Mike fill-in host Trey Wingo joins Golic and his son Mike Jr. on their new show, airing from 6-10 a.m. eastern.

In a conversation with Awful Announcing, Golic spoke about the split between he and Greeny and how he, his son— who will be on for the first hour of each show— and Wingo will move forward with their new show, a show that has Golic “re-energized.”

Golic admitted that he wasn’t as nostalgic about Mike & Mike ending as he thought he’d be, and that he’s ready for Golic and Wingo— which will be simulcast on ESPN2 until April, when it settles in at its permanent home on ESPNU— comparing this transition to when he switched teams twice during his nine-year NFL career with the Oilers, Eagles, and Dolphins.

“I probably would have been had this been the end of my run in broadcasting, had I been retiring after this,” Golic said, adding that he’ll likely be nostalgic when his career is over, much like how he went through his playing days. “I guess [there’d be more nostalgia] if the show ended organically, but it didn’t. It was ended. It was something I didn’t really see coming or expected to happen.”

Many of you already know the backstory behind the Greenberg and Golic split, but we’ll quickly recap it here.

Around February, 2016, Golic was called into a meeting with top ESPN management and was told that Greeny was going to get his own show in New York City— Get Up will star Greenberg and debut sometime in early 2018 on ESPN— and that management pitched Golic on a show with his son and another host.

Around the same time the eventual Greeny and Golic split was, as Golic put it, “the worst-kept secret in the media for a while”, Wingo began being asked to fill in on the show a lot more often than he had been in the past.

“I sort of put two and two together, and then last fall they started to talk more seriously about ‘hey, this may be happening, how would you feel about this?’” Wingo told Awful Announcing. “There were decisions made that set this in place, and then they came to me and said ‘would you like to be a part of it?'”

Wingo gladly accepted, having worked with Golic for more than a decade on the radio show and on NFL Live. Their two families live a five-minute drive from each other in Connecticut, and their kids grew up and played junior football together.

Meanwhile, Greeny and Golic were going through the motions, knowing that their run would soon come to an end, which was hardly a fitting way, Golic said, to end such a successful partnership.

”For the last over year and a half, we were kind of a lame duck show,” Golic said, noting that he was bummed about it towards the end. “We knew it was ending, so it kind of had that feel at times to it.”

Golic wished that the two could’ve announced their split on the air and said “‘hey, we’re gonna move on’ instead of ‘we can’t say anything until it becomes official,’” but how things progressed clearly turned out differently.

“I wish it could’ve ended by it running its natural course,” Golic said. “So it didn’t end the greatest way, that’s for sure.”

In the week leading up to Mike & Mike’s final show, Golic, Wingo and Golic Jr. were doing some work together in Bristol, preparing for their Nov. 27 debut, and there was kind of an odd vibe to the room, according to Wingo.

“We all sort of looked at each other a little bit and thought, ‘well this is kind of weird,’ but in a good way because for so long, we’ve all been used to Greeny and Golic in the morning,” Wingo said. “We understand that it’s going to be a little weird for everybody. And we sort of feel that too.”

And though it’s admittedly going to be strange at the start, Golic and Wingo already have chemistry from working together on various platforms for over a decade. That’s different, Golic said, from acclimating to the Odd Couple-esque newness in building that on-air relationship back in 2000 with Greenberg.

“For all the uneasiness of starting something new, there’s also a relativity of knowing exactly what you’re getting into because there won’t be that awkward feeling out, sort of, period,” Wingo said.

“Trey and I will hit the ground running,” he said.

There will be one major difference you’ll see in Golic and Wingo right away, aside from the new hosts. That’ll be, as Golic and Wingo put it, making a radio show for TV rather than a TV show for the radio. Over time, Golic said, the televised product veered away from the board operators, the radio-style bits, the sound drops and “morning show humor.” Those elements will be newly prioritized on Golic and Wingo, rather than “more segmented, like a TV studio show.”

Whenever there are cameras in a room, there’s going to be an unavoidable acknowledgement that they’re present, Wingo said. But there will be an added emphasis on making the listener, not the TV viewer, the priority.

“By eliminating the idea of sort of playing to the camera, for the most part, we’re just really talking to each other and talking to the listener,” Wingo said.

Going back and doing a radio show for TV, Golic said, will help them make the show more funny as well.

“The three of us are very self-deprecating. We’ll have fun at each other’s expense.”

The addition of Golic Jr., 28, for the show’s first hour will add what ESPN hopes will be a millennial’s youthful perspective to the show. Golic also cautioned that he and his son may not agree on everything as some people would believe, and that Wingo may have to play traffic cop or referee at times during some father-son arguments.

One criticism Golic and Wingo will face right away is how they handle high profile interviews. Mike & Mike was long accused of being too soft when talking to top athletes or various commissioners, something Golic has heard and vehemently disagrees with.

“It’s so easy to sit back when you’re not interviewing the person and say ‘oh you should ask this,'” Golic said. “I think what people need to understand is you kind of know the answers, a lot of times, and what you’re gonna get if you go a certain direction with people.”

Golic said he and Greenberg asked what needed to be asked.

“Do we start pointing fingers and yell at people? No, we don’t really do that. I don’t know if that’s what people want,” Golic said, inadvertently slipping and talking about Greenberg in the present tense. “So people get on us if we don’t follow up, and like I say to them sometimes is ‘in the moment, you kinda gotta read where that’s going to go, and you have x amount of time, and some of those questions are going to be a waste of time, and take away the time you need for other parts of the interview.”

Golic said he won’t change how he interviews people and that adding Wingo, with his interviewing chops developed over nearly two decades on NFL Live, NFL Primetime, the draft and Mike & Mike, will definitely help.

“If that’s what people want to think about us, then so be it,” Golic said. “You know what, I can’t help people’s opinions of us, I just have to do what I’m going to do and live with what people think.”

With the slowly-unfolding drama and ending of their 17-year partnership finally past him, Golic is ready to take on this new challenge and a new beginning in the middle of his broadcasting career, something rare for a 54-year-old.

“If we can get people driving to work saying ‘that was an interesting note’ or ‘I can use that note later,’ and then they laugh a couple of times on their way to work, I feel like we’ve done our job,” Golic said.