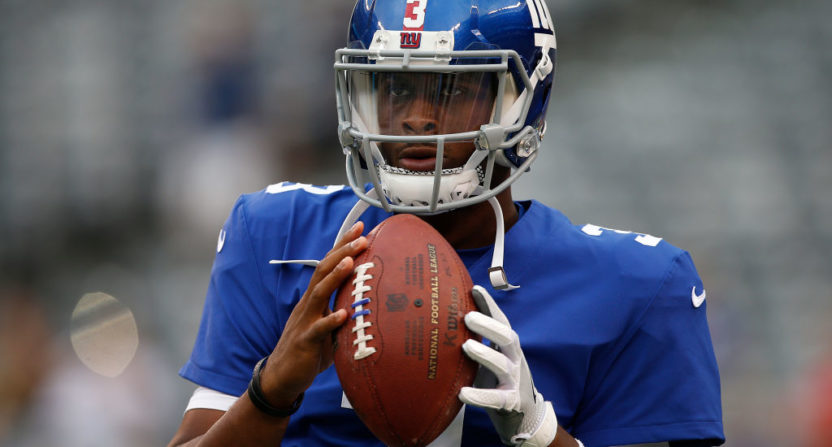 The controversy surrounding the New York Giants benching Eli Manning in favor of Geno Smith isn’t going away anytime soon. And on Sunday, it engulfed the other NFL team in New York thanks to some comments made by Smith’s former coach with the New York Jets.

Smith was just ok in his Giants debut on Sunday against the Oakland Raiders. His final statline was 21/34 for 212 yards and a touchdown in a 24-17 Giants loss. He didn’t hold back in his response to Ryan, calling him a “coward” in his postgame press conference from NJ.com:

“I did see one of my ex-coaches say he didn’t want me to be his quarterback,” Smith said. “That really upset me. I saved his job in 2013. We fought our ass for him both years. For him to say that shows how much of a coward he is.”

And here’s video of Geno’s response where he’s actually asked by a reporter which former coach he’s talking about and he makes clear that it’s Rex Ryan. (h/t Black Sports Online)

Smith does have a point in that you can make the argument he did save Ryan’s job in 2013. That season the Jets finished 8-8 and Smith threw for over 3,000 yards in a season where not much was expected of them.

Smith added that he happened to be watching Countdown earlier in the day before the Giants’ game in Oakland when Ryan made the comments about him.

“I was just sitting in my room watching, because we have the time difference, so I am just watching a little bit of football and you know you see that happen is like, wow,” Smith said. “The guy, first of all, you drafted me. Second of all, you started me. Third of all, I went out there and I gave you everything I had, and then you go out and say that. It’s unfortunate.”

How many analysts are willing to go where Ryan did and be so critical of their own former players and not automatically protect them? That kind of honesty, as brutal as it is, is what viewers and fans should get from their talking heads.

The trouble is you really don’t know what kind of honesty you’re getting with Ryan as he’s shown before he’s more than willing to protect himself with some revisionist history. The former coach also dumped on Mark Sanchez, saying he didn’t think he was a franchise quarterback, after writing those exact words in his book.

Regardless, it does make you feel for Geno because everybody has been piling on him after replacing Eli Manning. It wasn’t his fault that the Giants are only ranked behind the Cleveland Browns and University of Tennessee on the dysfunction scale.

We all know the Jets had their fair share of struggles with Smith and Sanchez (and Ryan) in those years in New York. So is this what Ryan really believes about Geno or is he just trying to make himself look better by throwing his former players under the bus for his own shortcomings as a coach?