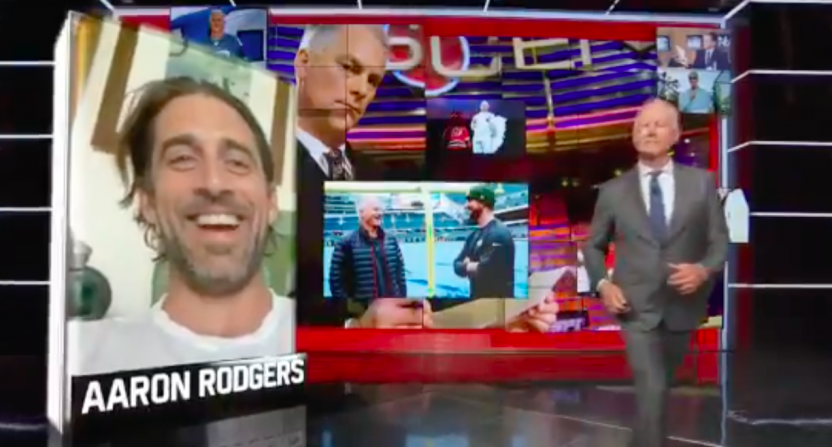 In early May, Kenny Mayne announced that would be leaving ESPN as a “salary cap casualty” after rejecting the sports media company’s new contract offer, which he says amounted to a 61 percent pay reduction.

Mayne joined ESPN on a full-time basis in 1994 and worked on SportSmash and RPM2Nite on ESPN2, before moving to the main network’s SportsCenter. After gaining some notoriety with his sardonic and humorous style, he did horse racing coverage, Sunday NFL Countdown features called The Mayne Event, the scripted series Mayne Street, and the world-traveling Kenny Mayne’s Wider World of Sports before rejoining SportsCenter in 2013.

While his contract officially ends on May 31, Mayne hosted his final SportsCenter on Monday evening and he went out in style, kicking things off with his signature playful annoyance at the fact that the lead-in baseball game took a bit longer than expected to end.

After a 26 minute wait, we’re off and running with Kenny Mayne’a last SportsCenter. pic.twitter.com/Q0NS2fWruf

“Great call of that extraordinarily long baseball game. Hope everyone loves baseball as much as us…we’ve got a full slate of action in baseball. Also…I quit.”

The episode got a big boost from an appearance by Green Bay Packers quarterback Aaron Rodgers, who happens to find himself in the midst of an offseason drama that could end with him no longer being Green Bay Packers quarterback. Rodgers, who hasn’t spoken too much about the specifics of his issues with the club, finally sounded off about some reasons and clarified other concerns.

"I'm just here so I won't get fined. … I'm just here because it's your last show and that 's the only reason I'm here." pic.twitter.com/hzcFgmVWYQ

“With my situation, look it’s never been about the draft pick, picking Jordan [Love],” Rodgers told Mayne. “I love Jordan; he’s a great kid. [We’ve had] a lot of fun to work together. Love the coaching staff, love my teammates, love the fan base in Green Bay. An incredible 16 years. It’s just kind of about a philosophy and maybe forgetting that it is about the people that make the thing go. It’s about character, it’s about culture, it’s about doing things the right way.”

“A lot of this was put in motion last year, and the wrench was just kind of thrown into it when I won MVP and played the way I played last year,” Rodgers said during the interview. “This is just kind of, I think, a spill-out of all that. But it is about the people, and that’s the most important thing. Green Bay has always been about the people — from Curly Lambeau being owner and founder to the ’60s with [Vince] Lombardi and Bart Starr and all those incredible names to the 90s teams with coach Holmgren and Favre and the Minister of Defense to the run that we’ve been on. It’s about the people.”

Rodgers also made some time to pay tribute to Mayne, and when Kenny rebuked Aaron over it, he responded by saying, “I don’t give a shit…I don’t care.”

50/50 we get a Meadowlark Rodgers and Mayne podcast by the end of the year. pic.twitter.com/wv790bScNI

As the interview came to a close, Mayne ended things as only Mayne could, taking a playful shot at the QB and saying “Fuck you, Aaron Rodgers” to close things out. Perfect.

Only @Kenny_Mayne could end his interview with @AaronRodgers12 this way. pic.twitter.com/Aw09nrT4Eq

“Last time we did the interview together, you told me to go heavy into the cryptocurrency game. I did. We’re down 40 percent. Then I lost my job. Gretchen just wants a new comforter. Fuck you, Aaron Rodgers.”

From there, it was a cavalcade of appearances from notable sports stars like Sue Bird and Marshawn Lynch as well as longtime ESPN personalities, such as Barry Melrose.

The key to interviewing someone is asking the right questions pic.twitter.com/fCoBOACcWS

And you thought Tom Rinaldi leaving for Fox meant you wouldn’t get emotional while watching ESPN anymore pic.twitter.com/vx4lbEFsfn

Mayne did get around to anchoring some sports highlights like the old days, making sure to pepper in some of those special on mots he was known for, and also adding acerbic touches like this one.

"And that ball has entered the transfer portal… and so have I."- Kenny Mayne ? pic.twitter.com/kEUQh3rr6Y

“And that ball has entered the transfer portal…and so have I.”

Eventually, Mayne completed that transfer process as he signed off from SportsCenter for the final time. Mayne has said he thinks he’s still got something in him and might land at another network or service soon. But in the meantime, ESPN bids farewell to yet another iconic host and personality, the latest in a long line to shuffle loose in recent years.

Kenny Mayne walks off the SC set one final time. Truly an ESPN legend and one we know will continue to shine bright wherever he lands next. pic.twitter.com/NgGRFzgVYk

Thanks for having electricity, Kenny.