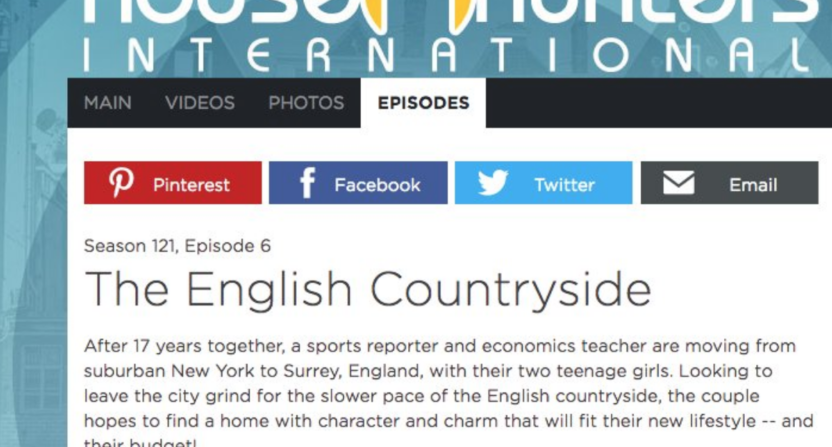 Among the many sterling ESPN employees laid off last April in the company’s infamous purge was the talented and versatile Jane McManus, who had served as a New York beat reporter, written features and columns for ESPNW, and contributed to various other ESPN platforms.

In the 11 months since the layoffs, McManus has not landed any sort of high-profile reporting gig, but she has found her way back into the spotlight another way: on House Hunters International.

On Monday, McManus tweeted a screenshot of the official HGTV description of the episode she’ll appear on with her husband.

“After 17 years together, a sports reporter and an economics teacher are moving from suburban New York to Surrey, England with their two teenage girls,” the description reads.

What the hell have I been doing since ESPN? Find out Tuesday night at 10 p.m. ET when our @HouseHuntersUSA episode debuts! Bonus footage: Will our marriage survive? Will our teen daughters acknowledge us publicly? Find out! pic.twitter.com/zFBnHNWkfV

We have watched over the past year as ESPN layoff victims have moved along to not only new jobs in media, but also gigs with Food Network, professorships at Ivy League universities, and various other interesting ventures. But moving to London and appearing on House Hunters International is about as exciting as any of them.

McManus’ House Hunters International episode will air on Tuesday night at 10 p.m. ET, at which point the world will learn what style kitchen McManus and her husband prefer, as well as how fussy she is about wall space.

Though we entirely support the idea of sportswriters appearing on House Hunters and are happy that McManus is doing something cool, this news is a bit sad for one reason: If McManus is moving to England, she will presumably not be reporting much for American outlets on American sports. And that’s a genuine loss for stateside fans of good sportswriting.

Regardless, best to McManus in the new home we’ll watch her choose Tuesday night and in her new life in England.