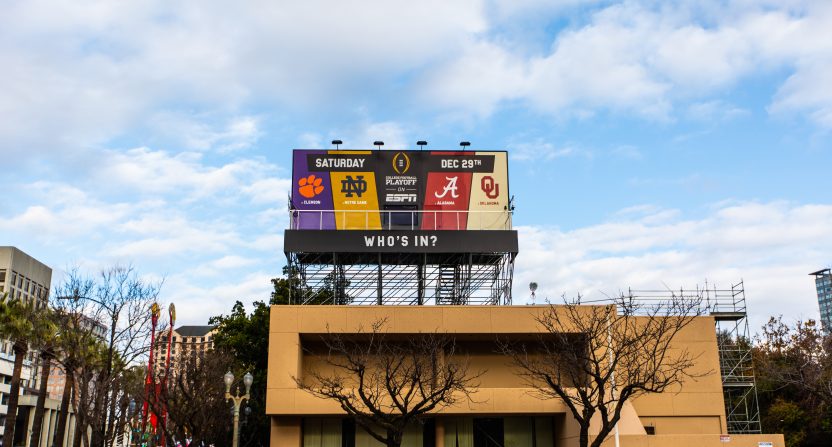 The College Football Playoff is almost here once again and ESPN is pulling out all the stops to promote what’s basically become their Super Bowl, at least in terms of what they have the broadcast rights to. They’ve got big mega-cast plans for the CFP Semifinals, providing a traditional telecast as well as multiple alternate telecasts, Spanish-language television and radio commentary, and hometown radio calls. They’re flying in Imagine Dragons (your favorite band) and dropping them on an island next to San Francisco (nowhere near the actual title game) for the Championship Game halftime show.

And of course, they’ve held a contest to give fans of the four teams in the College Football Playoff the chance to live on a billboard in the middle of downtown San Jose for 12 days just for the hell of it.

Let’s backtrack for a moment. ESPN asked fans to submit video testimonials explaining why they should represent their team on a 45-foot-tall billboard during the entirety of the playoffs. Almost 700 fans entered for the chance to live on a 40-foot wide by 8-feet deep billboard without discernible shelter from the elements. Four “winners” were chosen for the “opportunity,” based on the four teams that made it into the College Football Playoff. They are Alabama fan Llyas Ross Sr., Clemson fan Nancy Volland, Notre Dame fan Jeanette Kim, and Oklahoma fan Ruben Hunter.

So what, exactly, happens for these fans while they’re up there that whole time? Stuff, apparently. Per the ESPN announcement, they’ll “participate in activities and challenges to earn cash and prizes, many of which will be based upon fan engagement on social media,” which kinda makes it all sound like The Running Man without all of the stalkings and fighting (we hope). The two finalists will also be given “the opportunity to support their team at the National Championship game,” though it’s unclear exactly what that means because they can’t actually go to the game since they’re stuck on a friggin’ billboard.

There will also apparently be an ESPN3 live stream of the four fans standing around all day that you can watch if you’re into that.

Emeka Ofodile, ESPN’s VP of Marketing, says that the “billboard celebrates the unique fandom and passion in college football by putting it on display for the nation to see and engage directly with the fans.”

To be fair, that’s pretty spot on. Putting a group of people on display for the amusement of others with the general notion of compensation without any clear idea of exactly what means seems to represent college football rather perfectly.