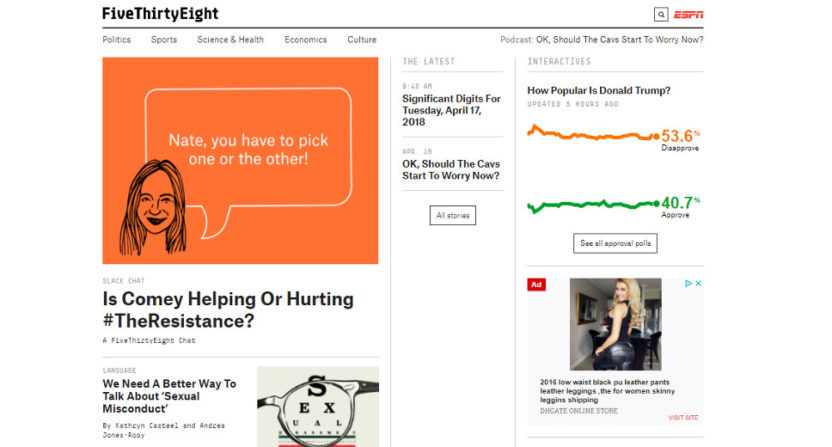 Earlier this year, Ryan Glasspiegel of The Big Lead reported that ESPN was “exploring its options to sell or otherwise divest from” FiveThirtyEight, the Nate Silver-led data-driven politics, sports and culture site they bought in 2013 and launched in March 2014. Now, that’s come to pass, but in an interesting fashion, with the site only moving internally within Disney and heading to ABC News.

Some personal news… FiveThirtyEight is leaving ESPN… but not going very far. Our new home is ABC News! We're super excited to work with @ABC and combine our strengths with theirs as we tackle the 2018 and 2020 elections and other news stories.

He added that this doesn’t mean they’re leaving the sports world, though, and that ESPN will still promote their sports stories:

I really want to thank the 538 staff for their amazing work—and thank ESPN for helping us to build the site into what it is today. And thank you to our readers for your patience. Things may be slow-ish as we work though some transition stuff, but we'll be back at full speed soon.

I have exciting news to share. Nate Silver and his brilliant FiveThirtyEight team are joining ABC News from ESPN.

At a time when politics has never been more extraordinary, fascinating, and confusing, FiveThirtyEight will help us bring even more clarity and insight to what’s really going on.

They’ve won numerous awards, including Data Journalism Site of the Year in 2016, with their unique blend of creative smarts, compelling and witty journalism and statistical analysis. And I am hopeful that the combination of their skills and ours will lead to even more great work in the years ahead.Of course,

FiveThirtyEight is much more than just politics, and we will be working closely with them and with ESPN on their sports, science and tech verticals too.

Given that ESPN was reportedly exploring more dramatic options such as an outright sale or spinoff of FiveThirtyEight, it seems possible that offers there weren’t at the level they hoped and it made more sense to keep the site within the larger Disney corporate empire, but just transfer it over to ABC News. And much of FiveThirtyEight’s coverage, especially when it comes to politics, seems like a better fit under that umbrella anyway; Goldston’s memo mentions that FiveThirtyEight worked with ABC News during the 2014 and 2016 elections, and this seems like a logical time to make that move; it’s well in advance of the 2018 midterm elections, and that will let the site be established under its new umbrella before that coverage really ramps up.

It seems likely that the primary reason behind this move is about political coverage. FiveThirtyEight’s politics coverage has tended to be data-driven and hasn’t stirred up too many controversies, but it indisputably is a site that covers politics extensively (in fact, that was the site’s main focus in its New York Times origins, and ties into the name, which is about the number of U.S. presidential election electoral college votes). And following a year where ESPN has been repeatedly blasted for “politics,” rightly or wrongly, it’s understandable why they want to offer critics less ammunition there. (Heck, even Get Up took a lot of flak before it even launched for a “woke” narrative based solely off a few comments that the show might occasionally cover politics when they impacted sports.)

The extent to which anything like Get Up or SC6 actually covers politics isn’t the point; it’s that those shows have been perceived as “political,” and that’s part of why ESPN went away from SC6. Similarly, while FiveThirtyEight’s actual coverage might not have been too problematic, the idea of an ESPN-branded site often focused on politics is probably something ESPN executives wanted to get away from, especially ahead of contentious midterm elections.

However, this is also notable as part of a larger strategy shift at ESPN. That March 2014 launch of FiveThirtyEight was perhaps a high-water mark for personality-focused sites across companies and genres, and while we’ve seen a few new ones since then, that model is no longer something everyone’s trying to do. And ESPN in particular has been moving away from it; they closed Grantland in November 2015, and there are lots of questions about the future of The Undefeated (which is much less specifically personality-focused in its actual incarnation under Kevin Merida than in its first-planned one under Jason Whitlock).

It’s also perhaps significant that the figures behind these sites are gone: Marie Donoghue, who oversaw Grantland, FiveThirtyEight, and The Undefeated, left ESPN at the end of last year, as did former president John Skipper. New ESPN president Jimmy Pitaro and new content chief Connor Schell don’t have particular ties to a site like FiveThirtyEight. The era shift is also worth talking about, as FiveThirtyEight’s acquisition and launch came during a time where ESPN seemed much more willing to throw money at things, a big change from today’s layoffs and emphasis on restraint. 2013 and 2014 were also much better years for digital publishing in general than 2018 is.

All in all, this is probably a move that makes some sense for everyone. It seems likely there weren’t too many buyers eager to snap up FiveThirtyEight at a high price, especially given the challenging financial climate for digital publishers, but just spinning the site off completely might not have been ideal either. Sending it over to ABC News means that the site stays within Disney, that it can work more closely with existing news teams on politics coverage, and that ESPN can disassociate itself from that side while still working with or picking up FiveThirtyEight’s sports coverage. But this is a further indication of how ESPN’s changed since 2014, and another part of the old ESPN that’s going away.