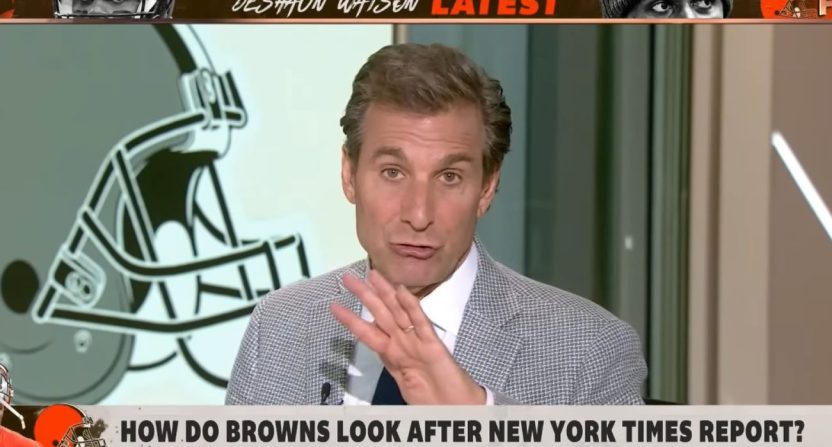 On Wednesday, Russo criticized the NFL’s failure to hold Deshaun Watson accountable after being accused of sexual assault by 24 different women, who alleged misconduct during massage therapy sessions. While making his argument, Russo cited past examples of the NFL failing to discipline its players proactively.

“Why is the NFL, year after year after year always reactive instead of proactive? Ray Rice, Randy Gregory,” Russo said before calling on the NFL to place Watson on administrative leave immediately, rather than waiting for the lengthy legal process to be completed.

Russo’s use of Gregory, who has been suspended by the NFL four times for violating the league’s substance abuse policy, prompted First Take to offer a clarification Thursday.

“We want to make a clarification on something Christopher “Mad Dog” Russo said Wednesday on First Take,” Qerim said shortly before a commercial break. “During a discussion on how the NFL has handled itself in the wake of the sexual misconduct civil allegations brought against Deshaun Watson by 24 different women, in making the point that the NFL has been reactive and not proactive in handing out discipline, Christopher mentioned past examples with NFL players and included defensive end Randy Gregory. That’s not the name he meant to say, now with the Denver Broncos, but formerly with the Dallas Cowboys.

“And although Chris did not say this, it could have left the impression with some viewers the NFL disciplined Gregory for allegations similar to those against Watson. And I want to make it very clear that Gregory’s suspensions stemmed from violating aspects of the NFL’s substance-abuse policy and had nothing to do with any misconduct against women.”

Russo didn’t blatantly accuse Gregory of being suspended for domestic violence, but listing him alongside Watson and Rice was definitely a poorly constructed argument. Because Qerim stated “that’s not the name he meant to say,” it’s possible Russo intended to use Greg Hardy in his argument, who was found guilty of assaulting his girlfriend in 2014 before getting the charges expunged from his criminal record because the victim stopped appearing in court.

Unfortunately, Russo was not on the show Thursday to own up to his mistake, leaving Qerim to speak on his behalf. But he did later issue a thread of tweets, echoing the clarification offered by First Take.

People could have thought I was saying Gregory was disciplined for misconduct against women. That was not my intention. I want to make it clear Gregory was suspended by the NFL for substance abuse issues, and never for mistreatment of women. Apologies to him and his family.

Credit ESPN for acting swiftly on the issue. After conducting a quick social media search, minimal backlash to Russo’s mistake was immediately visible. Yet unlike the NFL, First Take chose to be proactive and preemptively clarified Russo’s argument before they were widely criticized for tying Gregory’s name to any wrongful accusations.

This was the second time in recent weeks that First Take preemptively addressed a potential controversy before they were called out publicly for it. Last month, in the wake of the tragic Uvalde, TX school shooting, Stephen A. Smith and First Take apologized for using the term “sniper” to describe NBA guards.