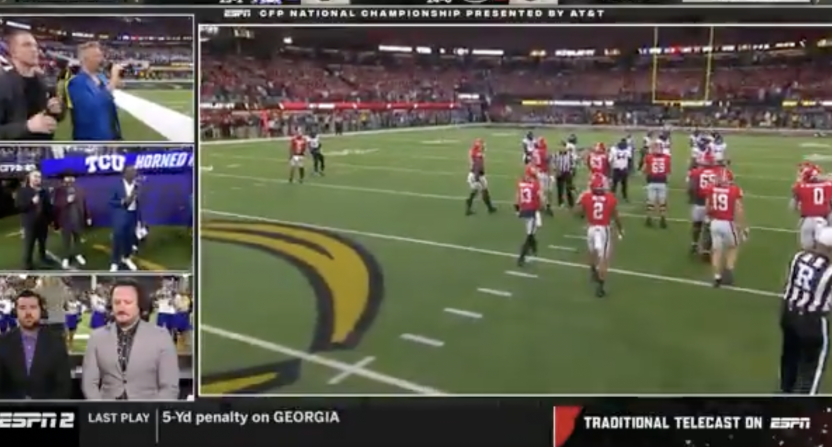 As the 2022-2023 College Football Playoff national championship game settled into the reality that the TCU Horned Frogs were very unlikely to stage anything resembling a comeback against the mighty Georgia Bulldogs, Pat McAfee welcomed back ESPN2 audiences “to the dumbest show that has ever run on any television channel of all-time.” A few moments later, McAfee introduced a Lou Holtz impersonator to do a call-in as the game itself had lost any sense of intrigue.

That’s perhaps the best way to explain what ESPN2’s Field Pass with The Pat McAfee Show was like on Monday night.

"Welcome back to the dumbest show that has ever run on any television channel of all-time." – Pat McAfee pic.twitter.com/RmZHPx1TjP

It was a foregone conclusion that ESPN would do some kind of alternative broadcast around McAfee after doing so during the CFP semis. Though when it was officially announced, there was certainly some pushback from those who were hoping to watch the game with the Film Room broadcast, only to learn it had been swapped out for McAfee and his team.

It’s likely that those who would have preferred the Film Room were not swayed by Monday night’s Field Pass presentation, though it’s hard to imagine winning them over at all.

The simple truth is that your mileage with Field Pass depended wholly on where you stood on McAfee himself as he was not only the main personality of the broadcast but was essentially also doing play-by-play all evening. While he was joined by The Pat McAfee Show co-host A.J. Hawk, former NFL player Darius Butler, Tone Digs, and “Boston” Connor Campbell, it’d be safe to say that McAfee garnered roughly 95 percent of the air time during the Bulldogs’ blowout.

What worked? Well, for one, McAfee’s candid stream-of-consciousness thoughts would allow his unvarnished opinions to cut through the shiny veneer of most football broadcasts. It’s not often you hear someone on ESPN call out an NFL stadium as “one of the dumbest-built stadiums I’ve ever seen.”

"This is one of the dumbest-built stadiums I've ever seen." – @PatMcAfeeShow pic.twitter.com/EJcK1DZeBd

Pat would also take SoFi Stadium to task over the constant rainfall despite having a roof, something that demanded to be commented on.

"This is god taking a tinkle on something magical…whichever god you believe in, it's raining right through this roof. I don't know how that's possible." – Pat McAfee pic.twitter.com/UBs0Y3pxFz

When it became apparent that this game was going to be non-competitive, the Field Pass had the opportunity to be the more enjoyable alternative to ESPN’s main broadcast, and it sometimes took advantage of that. Pat was never afraid to pull interesting people off the sidelines and insert them into the broadcast, whether it was a guy with a great mustache, a large man passing by, or a veteran who was being honored.

Pat and AJ get distracted by a guy with a beautiful mustache. ? pic.twitter.com/4Ra49cQ2UZ

McAfee may or may not also be hearing from Disney’s standards and practices team on Tuesday in regard to some FCC complaints. The brash podcaster wasn’t afraid to walk or outright cross lines regarding NSFW commentary during the game.

Early on, while referring to some of his broadcasting partners who were situated across the field, McAfee said “With where you guys are standing down there, the Georgia Bulldogs are about to come right in your face.”

"With where you guys are standing down there, the Georgia Bulldogs are about to come right in your face." – Pat McAfee pic.twitter.com/sNn9HI4UVm

And just in case that was too discreet for you, he ended the broadcast by saying “I personally would like to say thank you to the college football community for allowing me to penetrate you this season and be inside of you all year.”

"I personally would like to say thank you to the college football community for allowing me to penetrate you this season and be inside of you all year." – Pat McAfee pic.twitter.com/B764y3jDbw

While all of this certainly hinted at a raucous Barstool-esque broadcast, the reality is that much of the Field Pass presentation didn’t quite live up to that potential. That’s mostly due to there being too many people doing too little for most of the game.

The Pat McAfee Show’s Ty Schmit and Nick Maraldo would show up every once in a while to share some reactions from social media. But most of the time when the camera would show them, they would just be sitting there with nothing to do.

Do you like having people awkwardly watch you watching the game? ESPN2 is for you. pic.twitter.com/Hh4w1Fb5Zs

Towards the end of the broadcast, they were able to share a few interesting tidbits, but for the most part, they didn’t seem to serve too much purpose.

The same could be said for anyone other than McAfee most of the time, to be honest. Hawk was paired with Pat in an attempt to balance out his manic energy, but the former Green Bay Packers star really didn’t have much to say throughout the night.

As for the trio of Digs, Butler, and Campbell, it’s hard to remember any of their contributions, though Butler did the most with what he had to work with, offering some game analysis. Still, there were plenty of times when the camera awkwardly lingered on that trio with nothing to do while McAfee ranted or told a story.

A big part of the problem is that McAfee is such a force of nature that this kind of environment doesn’t really allow a lot of oxygen for others, especially if they’re not champing at the bit to chime in. While it was understandable why many of those people were on the broadcast, it would have benefited from just being McAfee and Hawk or McAfee and Butler.

The Field Pass broadcast idea is not too dissimilar to the ManningCast in that it’s a loose and free-flowing conversation happening during the game, prone to awkward moments and wild outbursts. The difference, however, is that the ManningCast is a very contained environment, and Peyton Manning’s desire to keep the focus on the game as much as possible cuts down on a lot of potentially bad TV.

It’s easy to understand why McAfee is so popular and why ESPN wants his personality front and center. He offers them the best of both worlds. A Barstool-lite presentation that connects with a younger audience without most of the pitfalls that come with that association. A larger-than-life personality who commands the camera and also knows what he’s talking about when it comes to football. McAfee makes sense in these situations.

The hope, however, is that future iterations of the Field Pass rein itself in and focus on what makes for enjoyable television. If McAfee is going to own the broadcast, get everyone out of his way and let him cook. Bring on guests like Tim Tebow and Marty Smith to provide a little context and commentary but keep things moving. Let Pat and his co-host be in constant motion instead of positioning him in one endzone while his silent crew stands in the other. McAfee works best as the host who is guiding the audience through the VIP section to this exclusive party taking place during a college football game.

Of course, there’s only so much anyone can do to make a game like Georgia’s obliteration of TCU enjoyable. And regardless of any changes or learnings, McAfee’s minions will be tuned in while plenty of other TV viewers won’t be interested. But if the name of the game is to provide a legitimately enjoyable alternative to the main ESPN broadcast, Monday’s Field Pass presentation had its moments but certainly left a lot of potential on the field.