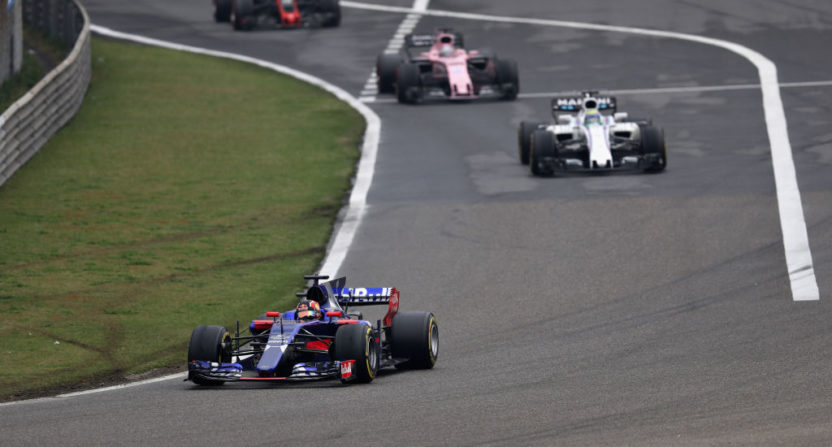 After the new owners of Formula 1 racing called NBC’s rights fee with the organization “a popcorn fart” earlier this year, perhaps the writing was on the wall for the Peacock’s tenure with the sport. F1 has signed a multi-year deal with ESPN, which will be the new home of F1 starting in 2018. It brings back the sport back to the Worldwide Leader, which had televised F1 from 1984 through 1997.

NBC/NBCSN has aired F1 since 2013 and, by bundling F1 with NASCAR and IndyCar, had branded itself as the home of motorsports. It still has the second half of the NASCAR Monster Energy Cup Series and Xfinity Series, IndyCar, and Red Bull GRC.

By re-obtaining the rights, ESPN can say it still has a foothold in motorsports, despite losing NASCAR in 2015, NHRA last year, and laying off announcers like Allen Bestwick last May. According to Sports Business Daily, ESPN will likely not pay a rights fee and depend on the world feed to televise the races.

Under the agreement, ESPN’s family of networks will air all 21 races in the season (16 on ESPN2, 3 on ESPN, and 2 on ABC). It will clear the schedule on Sunday morning, when most races will air on ESPN2.

ESPN executive Burke Magnus told Sports Business Daily that having openings in its schedule will allow the Worldwide Leader to promote F1 to its audience:

“We had the ability on Sunday mornings on ESPN2 to slide the races right into the schedule,” ESPN Exec VP/Programming & Scheduling Burke Magnus said. “The design here is to lean heavily into the sport once again. It’s been a few years. We want to make it a big deal again.”

NBC, which was hoping to keep the rights, wanted a long-term deal. F1 wasn’t in favor of that, and also wanted to keep its over-the-top rights in house, which it will do following the new deal with ESPN.

F1 also wants to create a second U.S. race in addition to the United States Grand Prix, currently held in Austin, and ESPN’s marketing firepower can help with the promotion.

ESPN and ABC are back in the Formula 1 game, which is notable given that ABC aired its first F1 race on Wide World of Sports in 1962. For F1, it feels it has a win-win with ESPN and it most likely won’t be calling its agreement with the Worldwide Leader “a popcorn fart.”