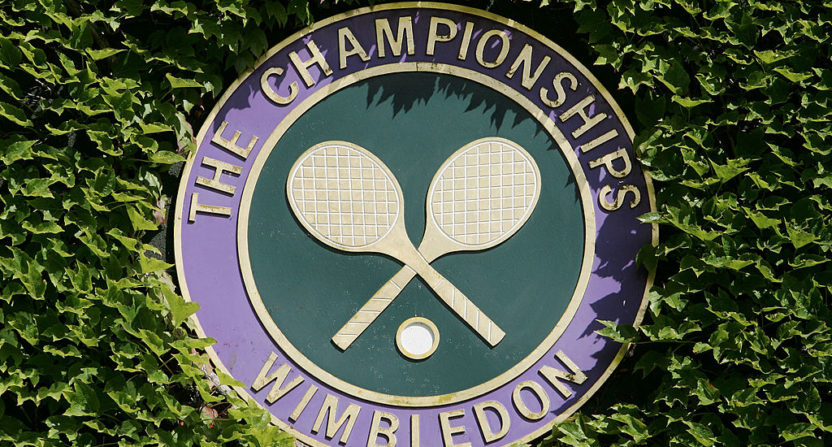 With Wimbledon set to begin July 2, ESPN has announced their coverage plans, and they’re providing complete coverage of every match for the first time ever. Thanks to subscription service ESPN+, they now have more incentive to offer digital coverage, and boy, are they doing that, offering full access to qualifying there and then showing all actual tournament matches live either on TV, on ESPN3 (available with a cable subscription), or on ESPN+ (available for an extra fee either with or without a cable subscription).

Here’s more information from the release they sent out Monday:

For the first time every match from the 18 courts will be played in front of cameras and presented exclusively by ESPN for the fortnight from London beginning Monday, July 2.  The coverage – first ball to last ball – includes more than 500 matches from the All England Club’s pristine grass courts, all available for fans between ESPN3 and the new ESPN+ on the ESPN app, with 140 hours of action on TV.  The action will climax with the Ladies’ Championship and the Ladies’ and Gentlemen’s Doubles Championships on ESPN on Saturday, July 14, and the Gentlemen’s Championship on Sunday, July 15, followed by the Mixed Doubles Championship.

Starting today and through Thursday, June 28, all four days of qualifying will stream live exclusively on ESPN+, the new direct-to-consumer subscription service available within the ESPN App.  All-day action starts at 6 a.m. ET from one of the grass courts at the Bank of England Sports Centre in Roehampton, not far from Wimbledon and the All England Lawn Tennis Club.  This is the first professional tennis action on ESPN+.

When the tournament proper starts on Monday, July 2, weekday action will start at 6:30 a.m. Eastern on ESPN3 and ESPN+, with ESPN’s TV coverage running from 7 a.m. Eastern through 4:30 p.m. Eastern (except only through 4 p.m. on Wednesday) for the first week. Saturday will see them start at 7 a.m. Eastern with a one-hour Breakfast at Wimbledon presented by Panera Bread preview show, and Sunday (the break day) will have a three-hour review of the first week on ABC at 3 p.m. Eastern. The second week will see ESPN coverage starting at 8 a.m. Eastern Monday – Wednesday, focused on Center Court, with other matches on ESPN2 and streaming. From the second Thursday on, all matches will air on ESPN.

Overall, the ESPN app “will stream more than 500 matches totaling 1,500 hours from all 18 courts” (counting TV coverage available through the app to authenticated subscribers, plus matches only on ESPN3 and ESPN+), and it will also offer on-demand matches, press conference streams, and the All-England Tennis Club’s “The Wimbledon Channel.” So there’s a whole lot of access available there.

Similarly to properties like the CFL that have their games split across ESPN TV/ESPN3 and ESPN+, though, viewers will need both a cable subscription and an ESPN+ subscription to access all the content. And that’s definitely another way for ESPN to promote ESPN+, including to those who already have cable. But while there’s an extra charge here for those who are already cable subscribers, it’s interesting to see that ESPN is offering extra content that they didn’t previously show, and that they’re now making every match available.

Another Wimbledon viewing option comes from the Sinclair-owned Tennis Channel, which is airing more than 200 hours of tournament coverage themselves and featuring personalities including Martina Navratilova, Jim Courier, Lindsay Davenport, Mary Carillo, Paul Annacone and Justin Gimelstob. However, their coverage will be time-shifted, beginning each day at 4:30 p.m. Eastern and running encore presentations through the night.