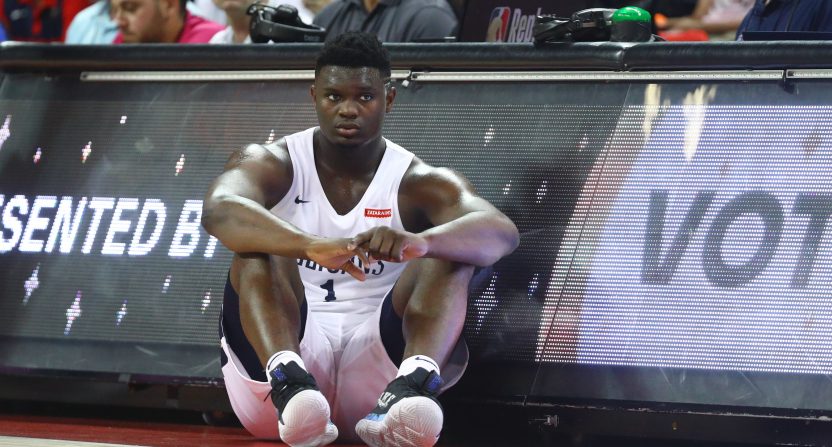 The Zion Effect was a very real phenomenon last season when Zion Williamson played for Duke and high ratings followed him everywhere he went. No wonder The Zion Cam was a thing (briefly).

If Friday’s NBA Summer League ratings are any indication, The Zion Effect is going to follow the phenom right into the pros.

ESPN announced that Friday’s contest featuring Zion Williamson and the New Orleans Pelicans vs. R.J. Barrett and the New York Knicks drew a 1.2 metered market rating on their main network. That’s a 33 percent jump from the previous record, which was set in 2017 when the Los Angeles Lakers and Boston Celtics met in what was Lonzo Ball’s expected debut. The telecast was also up 200 percent from the previous season’s comparable game, a match-up between the Dallas Mavericks and Phoenix Suns, which delivered an 0.4 rating.

Additionally, that rating also includes the fact that the game was halted in the fourth quarter following an earthquake. Summer League games in both the Cox Pavillion and Thomas & Mack Center afterward were postponed as well, though play resumed on Saturday once a survey was completed to deem Cox and Thomas & Mack safe.

While it’s still just a Summer League game, the news bodes well for the Pelicans and their TV fortunes this season. Even if The Zion Effect wears off a little bit, they’re still going to be an attraction that will have a lot of eyeballs on them, locally and nationally. In fact, the New Orleans market was the highest-rated local market on Friday for the game, pulling a 7.0. It’s also worth noting that the Duke faithful are remaining faithful as Raleigh-Durman (2.3) and Greensboro (1.9) both put up strong local numbers as well.

In the meantime, don’t expect to see any repeats of that number as Zion will sit out the rest of the Summer League with a knee tweak. Smart move because ultimately the Summer League doesn’t matter and The Zion Effect will be needed for the regular season.