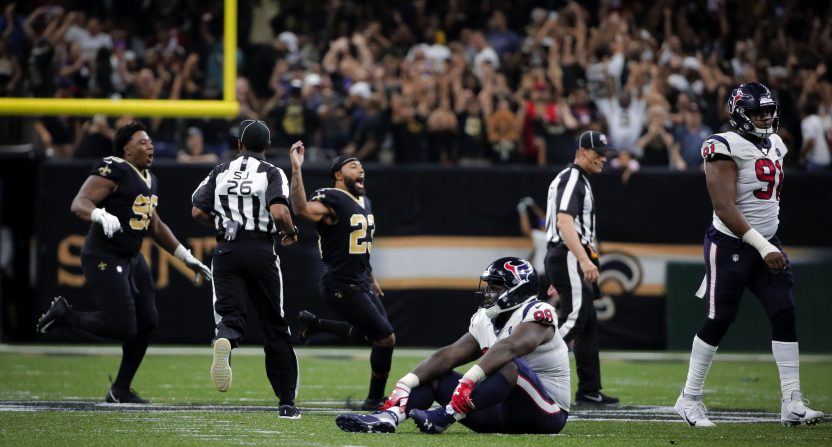 ESPN’s new Monday Night Football scorebug and graphics may have received some poor reviews, but the network will probably take plenty of comfort with how many people tuned in for last night’s Week 1 MNF doubleheader.

The overnight ratings were quite strong, especially for the legitimately thrilling opening game between the Saints and the Texans.

The early game (7:15-10:30 p.m. ET) in ESPN’s Week 1 doubleheader – the regular season debut for ESPN’s new Monday Night Football commentator team and a thrilling New Orleans Saints’ 30-28 victory over the Houston Texans – earned a 9.3 overnight rating according to Nielsen, based on the metered markets. This is an increase of 24 percent year-over-year and ranks as the highest-rated early game in ESPN’s opening doubleheader since 2015. The game rating peaked from 10:15-10:30 p.m. ET with a 12.8 metered market rating.

The slightly earlier kickoff and the exciting, back-and-forth second half action definitely had to help here, and it’s a strong start to the year.

The second game, meanwhile, wasn’t quite as compelling, with the Raiders taking a lead and kind of sitting on the Broncos down the stretch. Still, despite the late start time and a tough act to follow, the game posted a very solid overnight as well.

All in all, even despite the graphics issues (which ESPN commendably fixed more quickly than anyone thought possible), it’s a very bright start for ESPN’s NFL calendar. (And as they’re apparently gearing up for a carriage battle with AT&T, positive viewership numbers are extra-important.)

Next week’s game: the Browns at the Jets, which should be a good test for the durability of this ratings surge.