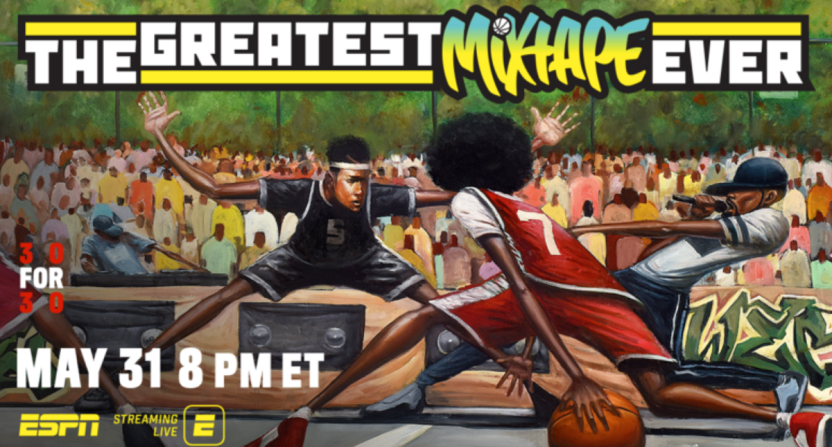 ESPN today announced details and a release date for the next 30 for 30 installment, The Greatest Mixtape Ever, which will explore the origins of the And1 Mixtape’s rise to prominence in the world of basketball.

Co-directed by Chris Robinson (who’s also directing LeBron biopic Shooting Stars and made the 2006 film ATL) and Set Free Richardson (a pivotal figure in the rise of streetball mixtape), the film will premiere on ESPN at 8 PM Eastern on May 31st, and be available for streaming as well via ESPN+.

In the late 1990s, a burgeoning young New York City DJ, Set Free, had the idea to set some grainy streetball highlights to a soundtrack of emerging rap music. The results culminated in what came to be known as the And1 Mixtape, a series of VHS tapes that forever transformed the game of basketball.

“This moment in time is an extraordinary piece of culture, and its impact in the worlds of music and sport is undeniable,” said Robinson. “These were giants of sport that came together from different neighborhoods and elevated not only basketball, but the spirit of the community. I’m glad to be a part of telling their story.”

Added Richardson: “Basketball and hip hop have a symbiotic relationship like no other combination of music genre and sport. The history of this mixtape – how streetball VHS tapes, a DJ and streetball players changed the culture of basketball – is essential to understanding that relationship. It had to be told!”

The film promises interviews with a wide array of artists and athletes, as you’d expect given the crossroads nature of the film’s subject.

There’s an accompanying podcast that sounds really promising if it can deliver on the premise:

Additionally, a companion 30 for 30 Podcast “A Streetball Mixtape,” will also debut on May 31. Drawing inspiration from hip hop mixtapes, the podcast explores how streetball – and the way it’s played around the United States – has shaped not just the game of basketball, but the country’s culture. In true mixtape form, this podcast is a compilation of stories, styles, and sounds illuminating the essence of the game.

Take this anecdotally, but as someone who went to a rural Indiana high school at the height of the And1 Mixtape’s popularity, I can confirm that it was very much a part of the discourse. I loved basketball, and played literally every day (I’d skip lunch and play pickup in the school gym; we had to play in socks or bare feet so as to not scuff the school court) and everyone knew all of the main streetball stars featured daily on ESPN’s And1 Mixtape Tour. (As almost everyone was white, there were like eight kids who wanted to be called the Professor.)

And this was somewhere very, very isolated from the culture the movement was borne out of. Done well, this has the potential to be a great 30 for 30 subject.