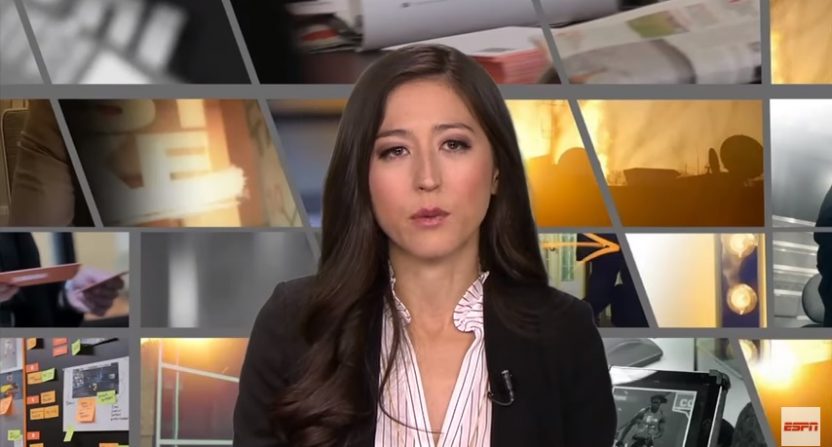 The main corridor on the top floor of the Boston Convention and Exhibition Center was buzzing with excitement and activity on the last Friday in February, when it played host to MIT Sloan’s Sports and Analytics Conference.

Various data and media companies had displays set up, students, sports team officials and media members gathered and congregated. And off to the side, a few hours before President Obama gave his famously off-the-record keynote address, not many noticed Mina Kimes, ESPN’s rising star reporter, analyst, and television personality, holding court with an exhausted-looking reporter on a bench towards the far side of the room.

Though not many people noticed her in that room, Kimes has created quite a niche for herself from her work at ESPN The Magazine and spots on Around The Horn, Highly Questionable, the Dan Le Batard Show and various podcasts and radio appearances.

“I didn’t even know that I had a niche,” Kimes told Awful Announcing. “Is working a niche? Not failing?”

There’s an enormous difference between not failing and thriving, and Mina Kimes is thriving at ESPN. She was named Awful Announcing’s Sportswriter of the Month for April, based on her profile of NBA draft prospect Luke Doncic and a collaborative feature on quarterback Lamar Jackson for The Undefeated.

Kimes, 32, has been at ESPN since 2014, when she transitioned from being a business and investigative reporter at Fortune and then at Bloomberg. While excelling at those publications, she was always drawn to sports, especially football and baseball, where she roots for the Seattle Seahawks and Mariners.

“While doing this, I was mostly tweeting dumb sports memes because that’s where my heart is,” Kimes said regarding her Twitter account, which currently boasts 168,000 followers. “The stupider the better.”

Kimes wrote some sports-related pieces on her now-neglected Tumblr account, and penned a 2014 piece for Slate about being a football fan. ESPN editors noticed this and approached her, asking if she’d someday be interested in making the change, “which at the time seemed absolutely insane, given that my career thus far had been primarily focused on business and investigative work,” she said. “But I decided to kind of make the leap. It’s like a quarter life change, I guess. Is quarter right? I was in my late-20s, so that feels right.”

The move was definitely a risk, considering she’d never written sports professionally before.

“But I’ve always been a rabid, rabid football fan and baseball fan growing up,” she said, making her transition to sportswriting a relatively smooth one.

Often, that fandom shows on social media and sometimes even on the air. Like that time on Around The Horn in December when she found out that Shohei Ohtani signed with the Angels and not the Mariners.

A live look-in at @minakimes reacting to the Ohtani news #HotStoveKewlKimes pic.twitter.com/pvAbDFVcNl

Or on Saturday, when her Seahawks drafted Shaquem Griffin.

Shaquem Griffin is a great story. Special guy. But I love this pick because…dude can BALL.

But to get to that point in seeing her raw emotion on the air, like the Ohtani announcement, she had to adjust to life as a sportswriter, which had both challenging and advantageous aspects to it.

“The subject matter was different, but I was still a reporter,” Kimes said. “So I was bringing the same tools and approaches and interests, just writing about different things.”

Kimes said that there were some things that sportswriters take for granted, like the process behind going into locker rooms or clubhouses or obtaining baseball statistics and data that she had to pick up, but she was excited to dive into writing profiles and features for ESPN The Magazine.

She was very proud of her first NFL profile she wrote in June 2015 on Darrelle Revis ,“just because I had never written about a star before.”

“It brings a different set of challenges as a writer,” Kimes said. “I was really happy with how it turned out. It ended up being about how he’s kind of this benevolent weirdo.” 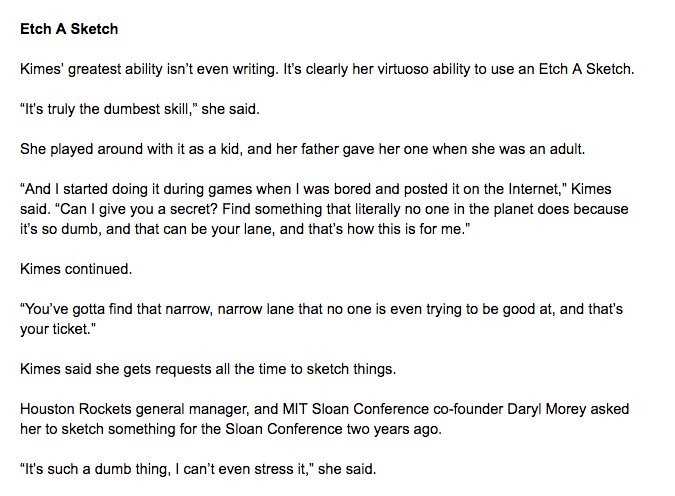 Another story Kimes found impactful was a 2015 piece on a Korean League of Legends player, her first eSports story, about a 19-year-old gaming prodigy named Faker.

“Honestly, I just wrote about him like he was Tiger Woods or LeBron or something,” Kimes said. “He’s the best in the world and he’s 19, and it was our first big eSports feature, which is a topic I enjoy a lot.”

ESPN has made eSports more of a priority since then, she said, because internally, higher-ups at the company were surprised by the amount of good feedback the story got.

“There’s a real appetite out there for that kinda stuff,” Kimes said. 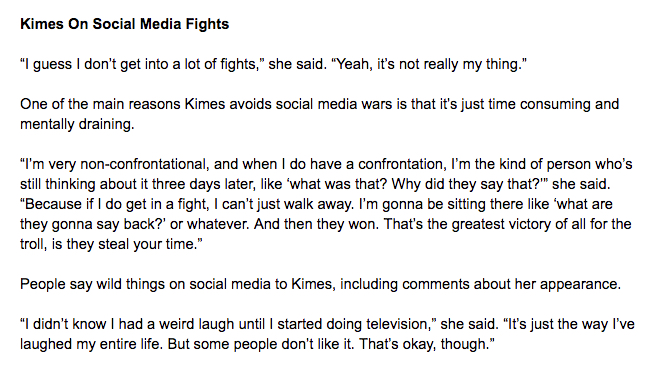 There also appears to be a real appetite for journalists and media members who are openly fans of certain teams, but Kimes said she doesn’t really write about the Seahawks or Mariners very much.

“I do feel like I wouldn’t want for it to become part of the story,” she said. But when she’s talking about the NFL during the season, it’s hard for the Seahawks not to come up.

“Just try to be objective,” Kimes said. “If anything, I feel like I’m more critical of the teams I like because I know more about them and have more interest in complaining about things I think they’re doing badly.”

While comfortable with her writing in the early days of her new sportswriting adventure, acclimating to radio and TV took more time. She began going on various ESPN shows to discuss stories she wrote, which is common practice, and also started making radio and audio appearances on a regular basis in 2016, most notably Bill Barnwell’s football podcast.

“The more credibility or experience I built up just talking about sports,” Kimes said about TV and radio, “the more people at ESPN thought of me as someone who could do that. And I started getting invitations.”

She started doing Around The Horn in March 2017. “Once you start doing that, it’s kind of like a regular thing.”

Despite TV and radio taking up more of her time here in 2018, Kimes is always motivated by finding and writing the next story.

“The way I get stories is kind of interesting. It’s a mix of things,” she said. “Some of them are my own ideas. Some of them are assignments. Many of them are this kind of gray area where ‘you know what would be a fun idea? What is eSports?’ I did a story about bat flips a few years ago, and that moment where I get to figure out what I think the story really is, that’s my favorite.”

Kimes, like this writer, enjoys having what the calls a “runway” of stories she’s scheduled to work on and is always looking for new shows or places at ESPN to be a part of, and writers, anchors and personalities at the network to collaborate with. And as time goes by and Kimes continues to flourish as a jack-of-many trades at ESPN, her decision to leave the world of business writing has proven to be an excellent one not just for herself, but for anyone who could truly appreciate the art and the craft of sports journalism.