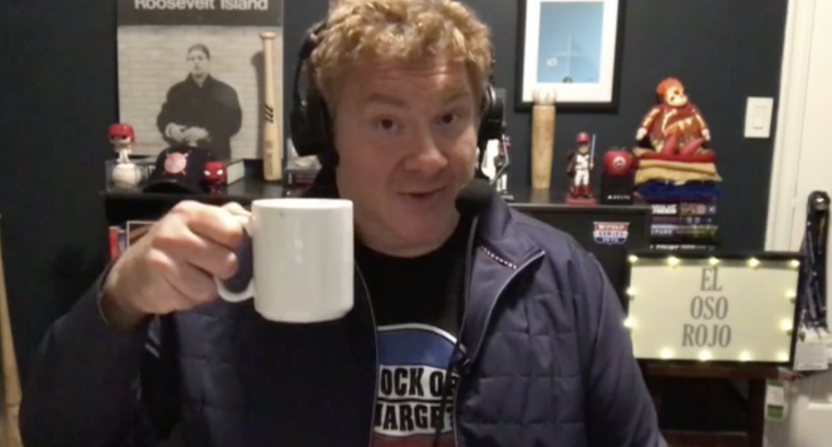 We’ll probably find out this week if there will be a 2020 Major League Baseball season. On Sunday, the players’ union made a counter-proposal to team owners’ latest offer, which includes alternatives to the schedule (a 114-game season instead of 82 games), salaries (prorated, rather than reduced pay), and safety concerns (high-risk players can opt out).

In the meantime, fans seeking a baseball fix have been able to get an early-morning (or late-night on the West Coast) taste of the game with ESPN’s broadcast of KBO (Korean Baseball Organization) play since early May. Telecasts have featured announcers and guests broadcasting remotely from home.

The format of the telecasts along with viewer unfamiliarity with KBO teams and players have indeed allowed ESPN’s talent to have a little more fun and show some more personality than they otherwise might during a traditional MLB broadcast.

Sciambi further explained to FanGraphs that he and his ESPN colleagues had to take a crash course in KBO with less than two weeks to prepare for calling games. The study included watching games and breaking down plate appearances, talking to MLB players and coaches with experience in Korean baseball, and consulting experts such as Sung Lee Kim, who went from writing for FanGraphs to working for the Lotte Giants.

Tayler’s piece has plenty more from Sciambi and Perez about their experience calling KBO games, the challenges in broadcasting remotely as opposed to being at the ballpark, the set-up required to work on those telecasts from home, and taking the opportunity to talk about MLB during its absence from the regular sports calendar.

Unfortunately, the interview with Sciambi and subsequent FanGraphs piece were likely done before KT Wiz released a cheer song dedicated to Karl Ravech.

Another history made! @karlravechespn becomes 1st ever broadcaster to have TWO cheer songs! Special thanks to #KTWiz!!! #KBO #ESPN @espn @ESPNPR pic.twitter.com/dQbrwIvcVT

Will Sciambi soon get his own cheer song? He probably deserves one, doesn’t he? For many early-rising (or night owl) baseball fans in the States, Boog is currently the voice of KBO baseball. Get the dancers and mascots to show him some love!

According to Tayler, ESPN plans to carry the entire KBO season and playoffs regardless of whether or not MLB plays its 2020 campaign. ESPN is ramping up its KBO coverage beginning this week with Tuesday’s Lotte Giants-KIA Tigers match-up, moving game telecasts from ESPN2 to the main network and pushing its regular morning schedule of Get Up and First Take back half an hour to accommodate the early-morning baseball.

KBO broadcasts will continue at 5:30 a.m. ET Tuesday through Friday, with Saturday games starting at 4 a.m. and Sunday contests at 1 a.m.