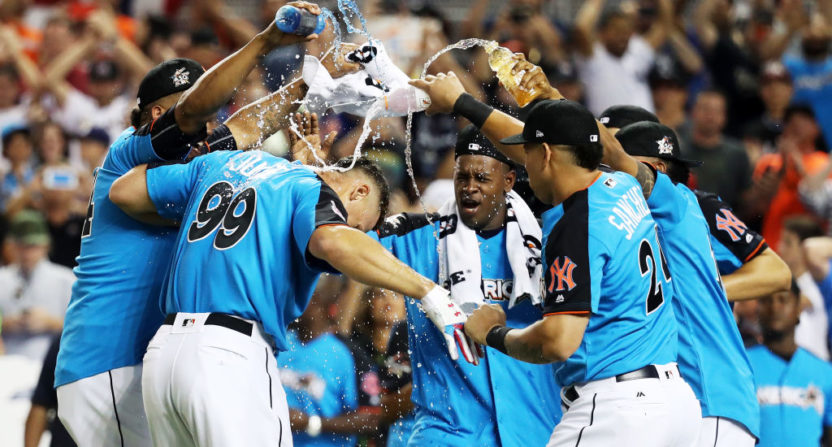 ESPN aired the first Home Run Derby in the post-Chris Berman era on Monday night, and while watching, all I could think was “this crew needs to loosen up.”

To replace Berman and an ever-rotating cast of analysts (last year, Sunday Night Baseball analysts Aaron Boone and Jessica Mendoza joined Berman on the “main set”, while the second set was anchored by Karl Ravech, alongside Dallas Braden and Eduardo Perez), long-time MLB voice Ravech took on the hosting duties, joined by Mendoza and Mark Teixeira.

The new broadcast crew wasn’t actively *bad*, but it also didn’t stand out at all. In fact, I found myself quite bored at times, which is surprising given the event they were calling. The Home Run Derby is supposed to be balls out insanity – during points of Monday night’s event, you would think Ravech, Mendoza, and Teixeira were calling a regular season Wednesday night game.

There was also a significant amount of awkwardness during the evening, specifically when eventual champion Aaron Judge joined the broadcast during Gary Sanchez’s time at the plate and couldn’t hear the questions being asked by Mendoza, leading to her eventually yelling the questions at him and taking attention away from Sanchez smacking the bejeezus out of the baseball.

And that was my main takeaway from watching the new crew – it didn’t seem fun. Berman didn’t have his fastball anymore, often relying on dumb cliches and getting confused. But at least he was enthusiastic and animated. I got the sense that Ravech, Mendoza, and Teixeira didn’t have a good feel on how to read the event, which led to analysis that no one really was asking for or cared about. I appreciate talk about launch angle and exit velocity during games, but I really couldn’t care less during an event when I just want to see dudes mash dingers. Then when the trio *did* try to show emotion, it was limited to random shouting like “wow!”, “oh!”, and “oh my gosh!”

We rolled out a Twitter poll during the event, and one opinion didn’t dominate the voting – the four choices were actually pretty evenly split. But the top result, with 29%, was to bring back Chris Berman. That’s not going to happen, but it should be considered somewhat of a sign that fans appreciate enthusiasm during an event like the Home Run Derby.

Look at the NBA’s All-Star Weekend – Turner has fun with it. The Inside the NBA crew is calling the All-Star Saturday events, not taking anything too seriously, and just having a great time. I get the feeling that Ravech, Mendoza, and Teixeira wanted their broadcast to more thoughtful and less emotional, but when players are cranking 500 foot homers and attacking the dinger machine with ferocity, it’s tough to stay level. Thusly, the broadcast begins to fall apart.

About halfway through the event, thanks to some recommendations on Twitter, I switched over to ESPN2 for the Spanish language call, featuring Ernesto Jerez and Eduardo Perez. And I’ve got to tell you – this was a trip.

I don’t speak Spanish. I didn’t understand much of anything that Jerez and Perez were saying. But they entertained the hell out of me, and clearly were having an incredible time watching all of these home runs. As a result, that made me more excited, made my viewing experience more enjoyable, and made the telecast that much better.

ESPN did make a couple of other improvements to their broadcast this year, notably a split screen featuring the batter at the plate and the ball off of his bat. In previous years, we’ve seen ESPN completely lose the ball thanks to focusing on the player swinging. That really didn’t happen this year, thankfully. The graphics that displayed the home run distance and exit velocity were integrated seamlessly into the broadcast as well, and didn’t clutter the screen more than necessary.

So, how can ESPN improve their broadcast next year? Even though Ravech just got the hosting gig, I would look in another direction for future Hom Run Derbies – Jon Sciambi seems tailor-made for an event like this, as does Adnan Virk, who I think would be a perfect fit with his humor and knowing when to relax and have fun with an event.

All in all, it was an uneven effort from ESPN. The Derby itself seemed to be an anticlimactic affair after the first round, but it was still a spectacle thanks to Aaron Judge’s prodigious dingers. Hopefully in 2018, ESPN loosens their collar a little bit and the announcers show more authentic enthusiasm during the Home Run Derby. Otherwise, the calls for Berman, whose performance during the Derby had drastically declined in recent years, to return will continue to grow louder.