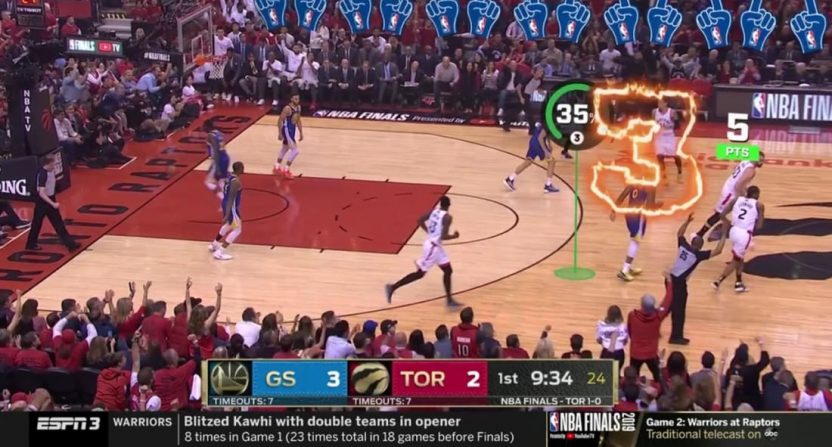 On Friday, ESPN announced that they would be experimenting with another alternate broadcast for Game 2 of the NBA Finals. ESPN (and other networks) has been dipping their toe into these waters over the last few years, trying to figure out if different broadcast options can better serve fans, drive up viewership, and increase sponsorship dollars. Last night’s efforts came with a twist, as they were described as an attempt to target teens, an audience segment that has proven to be difficult to corral for just about every legacy media company and pro league.

Friday’s announcement was a bit odd, because it was revealed in an exclusive to Variety without an accompanying press release on a quiet Friday afternoon. It seemed like ESPN was optimistic about this, but the broadcast was more a dress rehearsal for something bigger down the road, thus the lack of a full PR blitz. I was somewhat interested, and tuned in to check out some of the promised features, including “various emoji-like symbols pop up during game play – like a ‘fire’ graphic if a shooter has a hot hand – or data nuggets about steals, assists, rebounds.”

While the broadcast didn’t particularly connect with me (I’m well outside the target demo, but we don’t need to get into that), I actually came away impressed with certain aspects of the broadcast.

This might be the biggest issue with this idea. To achieve some of what ESPN was baking into the broadcast, this feed was several minutes behind the real time broadcast on my cable system. I timed it at two minutes and 40 seconds back, and this wasn’t because of lag over the time of the game. The broadcast started behind the game and the hosts alluded to this a few times.

That’s obviously not ideal, since you’re usually three or four buckets behind in the action. Even you are tuning out the main broadcast, you’d think teens would be pretty engaged on social media platforms like MySpace and Friendster while also texting with friends, which could spoil things that they haven’t yet seen in the delayed simulcast (is it really a simulcast if it’s delayed almost three minutes?). That said, there is a noticeable payoff for that delay.

ESPN really sold the emoji effects as being central to the teen angle here, and while I’ll get to that, it was a small part of the broadcast. What the broadcast was really bursting with was heavy usage of animations, play diagramming, and statistical info. Things you’d see to that effect:

Another nice touch was they often labeled switches and mismatches on screen, which was one of the additions I liked the most. A few times, they would put a halo around one player and that player would always be seconds away from a big play like an alley oop dunk. You began to get excited when a player would get haloed because you knew something was coming.

I am not really going to dig in too much here. I think that ESPN mostly wanted to do a dry run of everything outlined above, which I assume cost a lot of money to either purchase or develop. At some point, you have to make a case for how it can and might be used. The broadcast team of Katie Nolan, Jay Williams, SportsCenter on Snapchat host Gary Striewski , and Youtube bro Mike Korzemba was not that impressive, but wasn’t terrible. I mean, what do you expect, given this a group of people who don’t really work together and to be honest, I don’t think they’ve been around each other much at all. They were more or less four random ingredients thrown into a bowl with minimal notice, and ESPN hoped that they’d go well together as a united team of skinny jeans and sneakers.

Nolan admitted early on that she wasn’t much of a basketball fan, and also made an edict that the chips should be taken away because they were too loud to be eaten on set. There was no dip and I saw no napkins, so I supported the decision, although I sensed some of her on screen coworkers were upset by the unilateral executive order with no discussion, vote, or warning.

Jay Williams was on here as the traditional basketball guy. He told a few stories of his dealings with other various NBA players that were mildly interesting, but felt more like podcast fodder and not something teen-focused during the NBA Finals. This brings up another point: do teens really want to hear from a former player or coach, given how much older they are?

The other two commentators didn’t participate as much, which was probably by design because of the seating setup on set, or perhaps it was the pizza that was served early on in the game. ESPN could have really nailed it by serving avocado toast, but pizza seemed to hammer the point home that “we’re not taking things too seriously because we’re eating on camera!”.

There was one odd conversation between Korzemba and Williams where Williams seemed to think that nobody got mad at LeBron James for going to the Heat which blew my mind.  Korzemba pushed back, but pretty cautiously, which I imagine one does when they go from speaking to a webcam for Youtube compared to trying to explain to Jay Williams that he’s totally insane on an ESPN set.  This felt like a moment that more seasoned Embrace Debaters would have screamed at each other and Twitter would have ran with the exchange, but instead it was pretty tame.

What was missing, and what I missed

Obviously, the delay was a big thing for me. The things I think that caused me to float back to the normal broadcast actually didn’t have much to do with the concept itself, but rather the execution.

This broadcast had no Doris Burke, which sucks because Burke is amazing, but she’s also the one tracking down injury updates and boy did this game have plenty of moments of intrigue there. Given this broadcast is delayed, even Nolan and the gang took to Twitter a few times to see if they could tell us anything about the injuries. We were basically flying blind as Warriors cycled back and forth between the court, the bench, and the locker room. Also, no interviews with the coaches were featured, but rather the Jay Williams celebrity story hour. I’m not sure that’s an upgrade in any age bracket.

Stephen Curry has made it back to the Warriors bench after a brief trip to the locker room. He’s apparently not feeling well tonight pic.twitter.com/ESoIEnCT7W

I also missed the crowd noise. A loud crowd draws me in. Hearing “De-fense!” being chanted louder and louder, and even just Mike Breen’s “bang” as the crowd erupts, is an awesome feeling. This broadcast didn’t have any big game energy, which I think is by design but, I’m pretty sure general fan excitement is a good thing for any age demographic.

The analysis by this group was pretty minimal. That’s also seems somewhat by design, but I think a different group would have killed this. If this was any other Finals not including the Raptors, I would 1000% check out, and potentially prefer, a broadcast with NBATV’s The Starters doing this exact thing.

The broadcast also didn’t seem to have much in the way of statistical summaries. By that, I mean graphics you see coming in and out of commercials, or when a player is going to the free throw line. All the stats flashed in real time, but you rarely (if ever) got any “oh shit…someone is having a really bad game” or “the Ratpors are this record when up at halftime at home” type summaries. Another reviewer thought that lack of interactivity made the whole thing worthless (no polls, comments, etc), which makes sense given the bullseye they were aiming for.

Was it a success?

I have to think the answer here is a “yes,” given how much new technology was showcased here pretty flawlessly. ESPN has to feel good that they can successfully produce a different type of broadcast. I guess where I might differ is whether or not the commentators and the emojis really added value for the teen audience. Does that same audience really want to be bombarded with stats and in play diagrams?

This felt like 50% of a broadcast that was successful in showcasing an alternative broadcast for bettors and fantasy players. The other 50% of the commentary and emoji usage was teen-focused, and I’m not sure that really meshed well with the data-centric broadcast or was actually well received by the target demographic.

ESPN will continue to tinker, and that’s really what this and the Western Conference Finals simulcast is about. It’s interesting to think of a future where you could get the traditional broadcast and then check options like “on screen stats”, “on screen play diagramming”, and “on screen emoji reaction” like it was something as simple as turning on closed captioning. To me, that’s more realistic than thinking ESPN can bring in a large audience of teens via some skinny jeans and pizza, but I’m fucking old and basic and am usually finna to take a nap instead of getting turnt up with my squad. Also, any simulcast should have Bill Walton, so big mistake there.