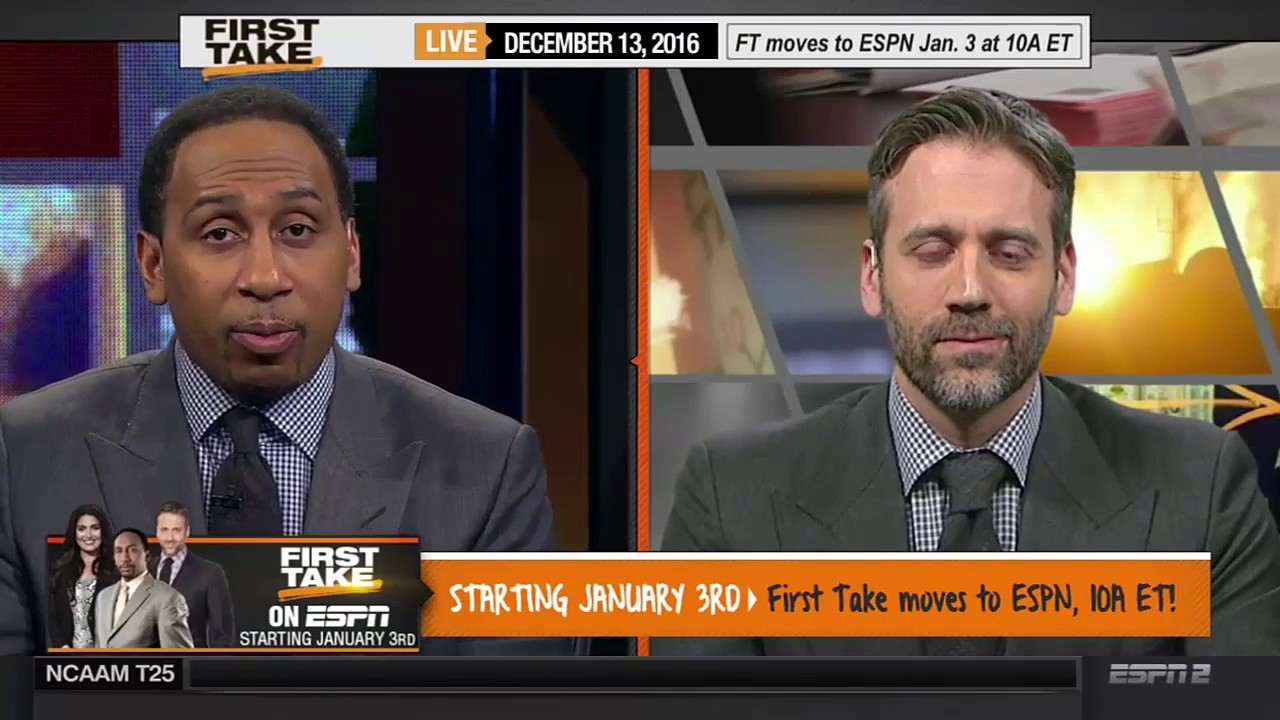 From an overall numbers standpoint, ESPN’s decision to move First Take to the main network and bump the 10 a.m.-noon SportsCenter to ESPN2 doesn’t make a lot of sense. From a public relations standpoint, though, and particularly a standpoint of competition with FS1, the move is much more understandable. There’s a strong case to be made that ESPN’s First Take shift has much more to do with Fox than with anything internal to ESPN. But will this move pay off for ESPN overall? That’s highly debatable.

Why is this area a key focus of competition for ESPN? Well, for one thing, it’s about the only area where Fox is willing to compete. Last February’s decision to kill off Fox Sports Live 2.0 and replace it with Fox Sports Live With Jay and Dan (more of a late-night talk/comedy show) meant FS1 was no longer going head-to-head in the news/information/highlights realm. Game ratings are somewhat comparable, but only when both FS1 and ESPN are showing something similar at the same time (for example, Saturday college football), and ESPN usually wins those comparisons too; ESPN also has many more live rights locked up.

Debate is the one area where FS1 has any claim to shine, and they try to make that argument as often as possible, whether by claiming Undisputed beat SportsCenter (ignoring how it got crushed by First Take, in an argument about as selective as the time in October where they claimed they were “America’s #1 Sports Network” based on a week where they had six live MLB postseason games) or by delivering quotes around how former ESPNer and current Undisputed co-host Skip Bayless “dominates” sports debate. (Not in the ratings, but hey, maybe Jamie Horowitz’s dictionary has a different definition of “dominate.”)

When Fox Sports 1 launched in March 2013, there was plenty of boasting, including Fox Sports president Eric Shanks saying “Fans are ready for an alternative to the establishment.” Four years later, FS1 is not trying to be an alternative in most respects, but they are trying to compete in opinionated studio programming with a cast of former ESPN talent, including Bayless, Colin Cowherd and Jason Whitlock. They’re also continuing to take shots at ESPN on that front, especially when it comes to promoting Bayless and Undisputed, “America’s fastest-growing debate show” (as the incessant promos they run for it will remind you), and while Undisputed wasn’t yet catching First Take on ESPN2 overall, it certainly did take away some of First Take‘s viewers and it was closing the gap a bit.

Moving First Take to the main network is at least partly Bristol demonstrating the firepower of their fully armed and operational ratings battle station. It ensures that First Take will stay well ahead of Undisputed for the foreseeable future, it proves that ESPN can lead in debate ratings even without Bayless, and it lets them win the head-to-head debate war with FS1. It also reinforces the “you’re nothing without ESPN” case we’ve regularly heard from Bristol types about departing talent, and gives them a way to change that conversation. However, it might not be the wisest move for ESPN overall.

The trend continued Monday, too, albeit with a little better showing from SportsCenter. First Take pulled in 530,000 again, while SportsCenter had 201,000 viewers (10-11) and 181,000 (11-12), which would lead to a total of around 721,000. That’s better than last week, but still significantly down from last year’s averages. For reference, Undisputed drew 155,000 over its 9:30-12 slot Monday, and averaged 122,000 last Thursday, leading to Fox’s infamous claim that it beat SportsCenter; technically true, but only from a certain point of view, one that ignores what First Take did.

As that Sports TV Ratings piece notes, of course, there’s more to consider. The combined ESPN (SportsCenter) and ESPN2 (First Take) block was actually down 27 per cent year over year for the week after Thanksgiving, so there’s an argument that things have actually gotten better for ESPN as a result of this move regardless of what’s going on with Fox. What about in relation to where those shows’ ratings were recently, though? Well, the last Thursday before this move (Dec. 29) saw SportsCenter pull in 525,000 and 526,000 (10-11 and 11-12 respectively), while First Take had 249,000 on ESPN2.

Comparing that Thursday to this past Thursday (which seems more typical than the boost First Take got for its highly-promoted debut on ESPN Tuesday), the ESPN audience is up 4,000 to 5,000, but the ESPN2 audience is down 128,000. That leads to a net loss of about 124,000, which seems about right. First Take‘s devoted viewers are of course going to follow it to ESPN, and plenty who just put on whatever’s on the main ESPN network will stick around, but there aren’t necessarily going to be as many following SportsCenter over to ESPN2. Thus, while moving First Take gives the Worldwide Leader the debate ratings win and lets them directly compete with (and dominate) FS1, it might not be the best move for ESPN’s overall audience.

On some levels, there’s a case for ESPN engaging FS1 strength-on-strength with this move. It’s a battle they’re going to win, and it’s one that takes away a PR strength and emphasis for Fox. However, there’s an argument as to whether they need to fight at all. In some ways, taking the short-term overall viewer loss here in an attempt to knock down their competitor is reminiscent of other business battles, but undercutting really isn’t as valuable here as it might be in other sectors.

FS1 isn’t going away overall regardless of how many more viewers First Take gets than Undisputed, so this isn’t a case where you can drive a competitor right out of business. Also, Undisputed is still probably a smart move for Fox if it continues to average 120-160,000 or so. That’s so much better than any other programming they have (non-live sports division). Is it worth Bayless’ giant contract? That might be more debatable, but as long as FS1 has any hope of attracting viewers for programming other than games, it seems at least partly worth it. Meanwhile, ESPN’s decision to send First Take to the main network gives them a short-term win, but at what cost in terms of overall viewers?

ESPN’s brand identity should be factored in here too. Yes, there are unquestionably people who like First Take, and no one’s saying they should cancel the show. However, with the departures of Bayless and Cowherd (and to a lesser extent Whitlock, who was in a smaller role at ESPN ever since his removal as the head of The Undefeated), ESPN not only lost talents, they lost critical lightning rods. On some levels, ESPN has been able to position themselves as the Fox Sports alternative for rational sports fans who don’t want to embrace debate; SportsCenter in particular continues to feature news and analysis, and while ESPN’s other studio programming can be opinionated, it’s usually much less take-heavy than Undisputed or First Take, and it certainly draws less criticism.

ESPN was always going to still take some heat for First Take, but their oft-repeated argument that “it’s just one show” carried more force while First Take was on ESPN2. Putting it front and center on the main network and running endless promos for it shows that Stephen A. Smith and his brand of hot takery remains critical to ESPN’s identity, and that’s going to turn some people off. While they’re not Fox and are not basing an entire brand around it, ESPN is still very much in the hot takes business as well, and putting First Take on their main channel reinforces that.

It’s still early days in the overall First Take to ESPN story, and things could still wind up changing. Perhaps First Take draws even more of an audience once people get used to it being on the main network, or perhaps SportsCenter eventually winds up thriving on ESPN2; either of those situations might alleviate the overall viewer loss. Or perhaps ESPN’s head-to-head debate win gets even stronger, stealing Undisputed‘s audience and forcing Fox to change tacks yet again. Maybe winning this battle against Bayless and Fox will be worth it. For now, though, it feels like ESPN is spending too much focus on winning the debate, and perhaps losing sight of the overall picture and their overall viewership in the process.