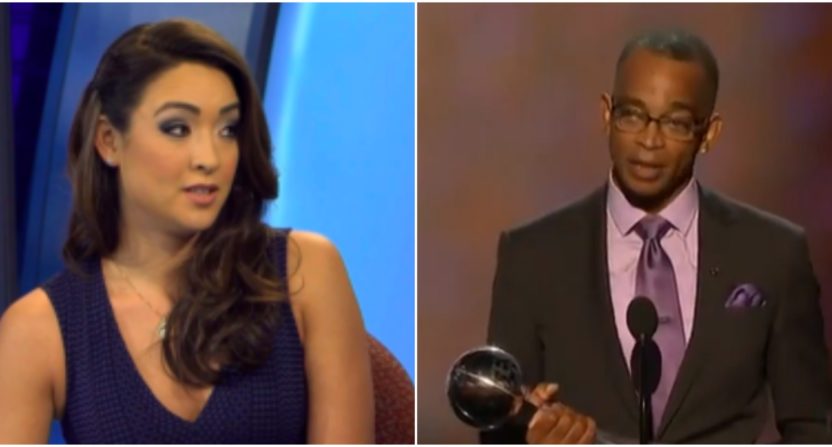 Believe it or not, it’s been more than two years since the death of ESPN anchor Stuart Scott.

But although Scott is no longer around to deliver catchphrases on SportsCenter, his influence clearly lingers at ESPN in ways both obvious (anchors who attribute their styles to Scott’s influence) and less obvious.

Among the many ESPNers with abundantly fond memories of Scott is Cassidy Hubbarth, a rising star in the network’s NBA coverage. In a Q&A with The Spun published Thursday, Hubbarth cited Scott as one of her top mentors at ESPN. Her explanation of what Scott meant to her was genuinely touching.

As far as on-air people, the one person that I really have looked up to the majority of my career and when I think about quitting or what it is to be a true professional, it’s always Stu Scott. Basically, after my first year, when I was doing ESPN3 work, I started meeting more people and people were starting to see me here and there even though they didn’t really realize what I was doing. Stu reached out to me and had no business doing so. You could argue he was the biggest star at our network. He offered advice and encouragement, and from there we just became good friends. We really didn’t talk about work that much. We just talked about our families. He had two young daughters and we obviously talked about his courageous battle with cancer. We became really close. He was such a great friend. He had so much going on but he would always reach out if there was something big going on with me that he was noticing. I wish I would have asked him more advice in my career but I just valued our friendship so much that I wanted it to be about us two individuals.

There were many times where I would see him getting ready for SportsCenter and he just was in so much pain. It didn’t look like he could get through a segment, let alone two hours of SportsCenter. But as soon as that red light turned on, he had no cares in the world. The energy and professionalism he put into every single show–he knew everyone’s name and addressed them with decency and respect as one should. For him being such a big star, you could see how much he cared about every single show like it was his first show he’d ever done. I just try to remind myself that if Stu could battle everything he battled and put on the performance of a lifetime every time that light came on, I don’t know what more motivation I need.

Hubbarth articulately touched on two recurring themes you hear when people who knew Scott talk about him. 1.) He was kind and caring and friendly and personable. 2.) It was absolutely incredible how he maintained the same energy and enthusiasm even while battling the cancer that eventually killed him.

Sometimes when a prominent person dies, the praise is feint or selective or back-handed. But with Scott, every person who knew him seemed to have some effusive thing to say, along the lines of what Hubbarth just offered. He’s gone, but there’s never a bad time to remember him.

In her Q&A with The Spun, Hubbarth also talks about her new contract extension, social media, the NBA MVP race and more. It’s worth checking out.