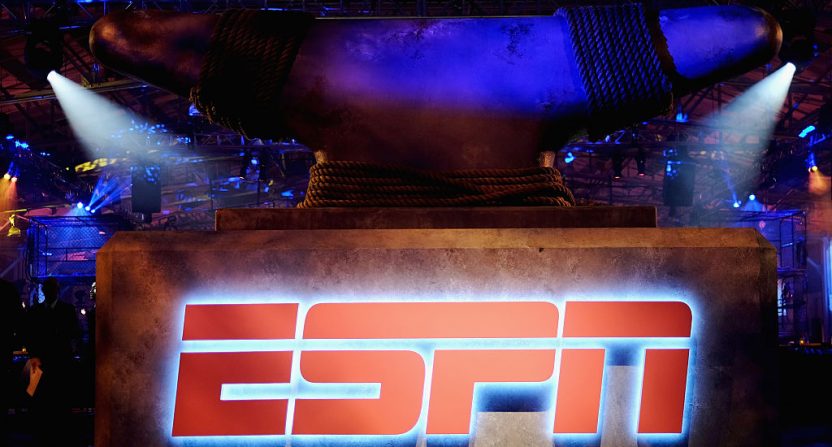 After presenting at Disney’s upfronts Tuesday morning in New York, ESPN’s executive VP of programming and scheduling Burke Magnus and ESPN executive VP of content Connor Schell held a scrum with select reporters running a gamut of topics from ESPN+, the XFL and how the network made strides to fix its relationship with the NFL.

“So far, so good,” Magnus said of Plus’ two million paid subscribers in 10 months. “We’re learning every day. We’re starting to get into the second cycle for a lot of things. And so the content will continue to evolve from a live event perspective.”

Schell mentioned that content integration between ESPN+ and the linear ESPN has improved. And having SportsCenter and the crawls touting Plus shows like Kobe Bryant’s and Peyton Manning’s Detail in an organic way.

“When you can run a Warriors highlight and tell people at the end that Kobe’s talking to Draymond Green as part of the latest episode of Detail, that to me is pretty cool,” Magnus said. “Detail to me is probably a show that would be difficult to schedule in a linear environment.”

In addition to Disney’s announcement that it’s taken full control of Hulu, the major news of the day was ESPN’s partnership with Caesars on betting and gambling content and an opening next year of a branded studio in its Las Vegas casino. Daily Wager will continue on ESPNEWS, with potential integration on that show with Caesars down the line. Then the network will explore possibilities for additional content in the future.

“I think you’ll continue to see that show grow on linear network,” Schell said of Daily Wager, “and then trying to figure out if we do a specific digital show, that’s something we’re talking about.”

In the short term, gambling won’t be fully incorporated into live event coverage just yet.

“This is a news and information and digital play around stats analytics and information,” Schell said, who specified that the deal with Caesars doesn’t have a specific timeline or set number on how many gambling-related shows will be created.

“We started a multi-year relationship,” Schell said, “and our expectation on both sides is that relationship will grow.”

Magnus says the incorporation of these betting and gambling elements are governed by the rights agreements ESPN has with the various leagues and properties.

“We think that the proliferation of legal sports gambling is gonna create more engaged sports fans that will then manifest itself in the viewership,” Magnus said, “both in terms of reach and time spent.”

ESPN+ remains interested in purchasing additional soccer rights for its platform, which already boasts Italy’s Serie A, the Dutch Eredivisie, Chinese Super League, men’s and women’s leagues in Australia, and out of market games for Major League Soccer.

“We’re looking at all territories of the world,” Magnus said, but he’s focusing on certain areas. “We could probably do more in Latin America, South America, Central America and Mexico. I think that’s the next place we’re gonna look.”

Just like ESPN feels that a show like Detail works better on Plus than it does on one of its linear networks, the same can be said for ESPNFC’s weekly show and MLS’ similar offering.

“We can put the show in front of fans who have directly engaged with these games across global football,” Schell said.

For Magnus, purchasing all these varied soccer properties is an effort to ensure America’s hardcore fans couldn’t possibly maximize their enjoyment of the sport without ESPN+.

“You really have to assemble critical mass in order to get that dynamic,” Magnus said, for what he called making Plus “an indispensable proposition.”

Disney and Fox are making a big bet in the new TV season that spring football is indeed an indispensable proposition to sports fans after acquiring the rights to the XFL, whose 10-week inaugural season begins the week after the Super Bowl. Asked whether putting the games on ABC and not ESPN is a risk for a “new” league, Magnus said that because the XFL isn’t an established entity, even if we know its origins and its original iteration, the league will benefit from the broadcast exposure every weekend.

“I think you use the AAF’s demise as a perfect example,” Magnus said. “We thought, and Fox is obviously right there with us, that to try and ensure the best possible chance at success coming out of the gate, that a consistent schedule and the broadest reach platforms was really, really important to give it its best chance.”

Conversely, the AAF folding before the completion of its first season put its broadcast partners, CBS and Turner, in a bind by taking away its games in important broadcast windows because it was ultimately not viable financially.

“I don’t think it’s a huge risk,” Magnus said of putting the XFL on ABC. “With Vince [McMahon] and the WWE’s involvement with Disney and Fox, we think that this is really secure.”

“And we feel good that there’s an audience there,” Schell added.

There wouldn’t be a proper ESPN discussion without the NFL, Monday Night Football and the oft-discussed relationship between the network and the league. There’s been widely publicized speculation surrounding Disney’s upcoming bid to get back in the Super Bowl rotation or getting a Sunday package the next time the NFL opens up its rights packages. The rumor that Disney could move MNF to ABC to curry favor from the league is untrue, Magnus said.

“They’re still devising how they’re going to bring their rights to market next time,” he said. “But we have said generally, Bob [Iger] said that as a company, the Walt Disney Company is very interested in that kind of content, for any possibility”

Magnus said that nothing will be ruled out in terms of what Disney will do when the rights are open for bidding and that he doesn’t know if the NFL packages will look differently than in its current form, with digital and streaming rights possibly being sold differently than they are now.

“We’d be foolish to sort of say ‘no, we’re not interested for ABC,’” Magnus said. “The Walt Disney Company is interested in NFL content and there are many different ways that could manifest itself, ABC certainly being one.”

Disney was touting what it considered a successful weekend of NFL Draft coverage on ABC and ESPN, touting its engagement with newer and wider audiences on broadcast. Magnus and Schell said that the network will be looking for similar opportunities to broaden its audience through ABC, though they said there have been no discussions with the NBA to put its annual June draft on ABC as of yet.

The NFL Draft being given to ABC as opposed to Fox last year could certainly be seen as a sign of mended fences between the league and ESPN. But Magnus was wary to venture that the improved relationship would necessarily lead to a Super Bowl or expanded rights in the future.

“I wouldn’t make too much of it,” Magnus said. “I think it’s in pursuit of a better relationship. This is my job, so I’m not reluctant to say that the relationship needed to be improved. And it has been. And now you’re seeing the manifestation of that in a variety of ways. The draft is certainly one of them.”

Magnus said that you know an eroded relationship when you see one, and that’s what happened in the previous few years with the NFL.

“We just weren’t in a good spot,” Magnus said. “It wasn’t one thing. It wasn’t something that happened. I wouldn’t overblow individual personalities who were involved in that. I just think it had eroded slowly. It eroded over time. And Jimmy [Pitaro], to his credit, made it a priority from day one, understanding the power of the NFL and the power of their content, primarily, and the importance to our business. And so he identified that as a problem, he made it a priority and we’re well on our way to getting it repaired.”

Magnus added that his job is not just to acquire rights for ESPN, it’s to help maintain and advance the relationships with those leagues, conferences, tournaments and events over time, none more important than the NFL.

“In my business, when the relationship is bad, it prevents things from happening,” Magnus said. “When a relationship is good, it makes a whole array of things possible.”