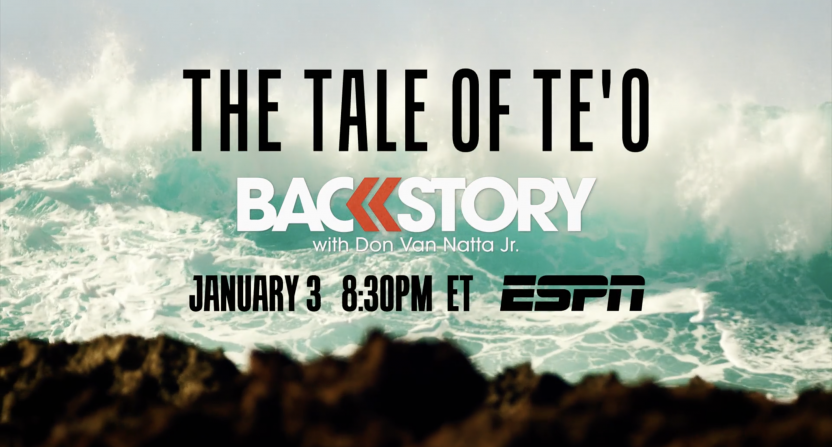 The story of a top college football player making up a story about a fake girlfriend who died of cancer that actually wound up being a hoax against him would sound like the ultimate 2020 story. Amazingly, that happened seven years ago and the fallout from that captivated those both in and out of sports. It was a real life soap opera with the kind of twists that even those writers wouldn’t have come up with.

ESPN released a trailer for a new episode of their investigative docuseries Backstory and it’ll investigate the Manti Te’o catfishing scandal. Previous episodes of Backstory include Serena Williams and her incident with a chair umpire at the 2018 U.S. Open, Shoeless Joe Jackson and Pete Rose being banned from Cooperstown for gambling in baseball, and LeBron James and The Decision.

For Manti Te’o, host Don Van Natta Jr. will look into what happened and maybe shine a different light on what happened now that seven years have passed.

“This strange, complicated tale ranks among one of the more challenging stories of my 30-plus year journalism career,” says Van Natta. “Eight years later, there are plenty of lingering, intriguing questions about the saga. Among them: Was Te’o complicit with his catfisher? And when talking with reporters, did Te’o purposefully or inadvertently fuel the legend with the words he chose about his girlfriend, whom he described as ‘the love of my life?’ And what does it say about media-made myths and the stories we all find irresistible?”

For those unfamiliar, Manti Te’o had a girlfriend named Lennay Kekua who went to Stanford. After a car accident, it was discovered she had leukemia and later died on the same day as Te’o’s grandmother. The story resonated throughout because it was so heartbreaking and people can identify with grief and sadness. Then an anonymous tip to Deadspin revealed that Kekua didn’t exist and Te’o was making her up. The aftermath of that was that Te’o only had an online relationship with “Kekua” or at least someone he thought was Kekua, and never met her. While Te’o kept up the lie that Kekua was dead after learning that wasn’t the case, Kekua was actually a man named Ronaiah Tuiasosopo who eventually admitted to the hoax as people learned about the concept of “catfishing.”

Not only did the Te’o/Kekua story teach us about catfishing, it taught the media a lesson about great stories possibly being too good to be true. That a story we desperately want to believe because of the message it brings might not actually be what it seems and it’s important to not be blinded by the great story when that great story might have potential red flags.

Van Natta talked to Te’o for the episode as he tries to get a sense of who knew what and when, for a story that Te’o still carefully handles what is revealed.

“Doubts about many aspects of his story still linger to this day,” Van Natta says. “And I believe that’s explained, in part, by the careful way Te’o told his story back in 2013 and has said nothing about it since. And, as I discovered in recent months, Te’o and his handlers are continuing to carefully manage the way he chooses to answer a reporter’s questions.”

Backstory: The Tale of Te’o will debut Sunday at 8:30 PM ET on ESPN and will be available on the ESPN app right after and then ESPN+ in late January.