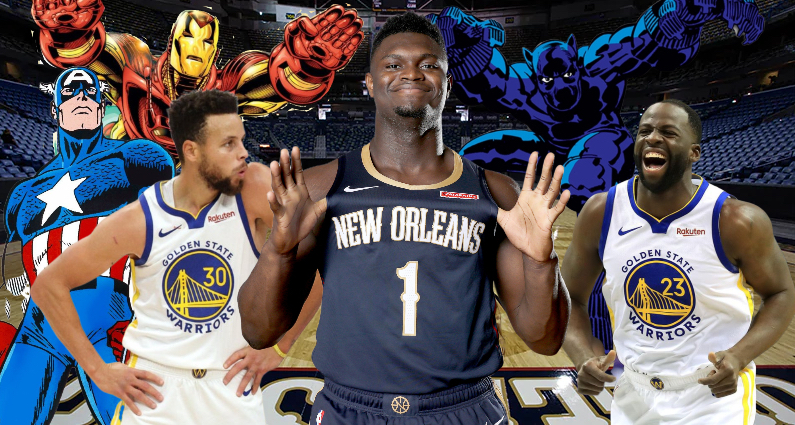 During the past two nights on ESPN, Disney has used two of its most prominent brands to reach out to younger viewers watching the NBA and Major League Baseball.

On Monday night, an alternate, Marvel-themed broadcast of a Golden State Warriors-New Orleans Pelicans game was shown on ESPN2 with an “Arena of Heroes” fictional storyline attached to the game and special graphics used throughout the telecast. Ryan Ruocco, Richard Jefferson, and Angelique Roche called the action, working in many references to Marvel characters such as Iron Man, Captain America, and Black Panther and the supposed contest taking place.

Were fans interested in Marvel mixed in with their NBA for one night? Well… sort of. According to Sports Media Watch, 274,000 viewers tuned in for the Marvel telecast. That’s more than the audience for ESPN’s “Statcast” broadcast for an April 25 Padres-Dodgers game and apparently outdrew ratings for a “Daily Wager” gambling-themed telecast for an April 14 Nets-Sixers game.

The majority of viewers preferred the regular NBA telecast, however. ESPN’s audience for the traditional broadcast drew 1.12 million, 300 percent more than the ESPN2 viewership.

To no surprise, dedicated sports fans probably weren’t interested in the Marvel nonsense surrounding a game featuring two of the NBA’s biggest stars in Steph Curry and Zion Williamson. Not to mention that the matchup was an important one for Golden State, who currently holds the No. 8 seed in the Western Conference and faces a play-in tournament matchup against the Portland Trail Blazers or reigning NBA champion Los Angeles Lakers.

During the Marvel broadcast, scores by the Pelicans were punctuated by an Avengers logo, while Warriors’ baskets ended with an Iron Man graphic. Three-pointers would have rocket trails behind them, while dunks were accompanied by “Hulk Smash!” Throughout the telecast, Marvel heroes would pop up around the action. For instance, Captain Marvel sitting atop the backboard during free throws or Iron Man and Black Panther on the sideline cheering their team on.

At one point during the telecast, Ruocco, Jefferson, and Roche interviewed actor and devoted New Orleans sports fan Anthony Mackie — the [SPOILER ALERT if you haven’t finished The Falcon and Winter Soldier on Disney+] new Captain America — for nearly 10 minutes.

It was a fun conversation; Mackie is always entertaining and candid. But imagine the outrage on social media if the announcing team on a conventional broadcast talked to a celebrity for 10 minutes during game action and took attention away from the game.

Tuesday’s Astros-Yankees ESPN broadcast had a Star Wars theme for May 4 (“May the 4th be with you!”). But that was a bit goofier with Karl Ravech, Tim Kurkjian, and Eduardo Perez dressed up as Star Wars characters, rather than lightsabers and Tie Fighters flying around the screen during the telecast. Darth Vader or Emperor Palpatine calling balls and strikes behind the plate would’ve been a nice touch, though.

ESPN talent may want to consider taking a PTO day in future years on May 4th. pic.twitter.com/6m8MyzwzEt

Really, the most disappointing aspect of the Star Wars telecast was that Kurkjian wore a Yoda mask and not make-up and prosthetics to resemble the Jedi master. Time and expense were surely considerations, and maybe Kurkjian was only willing to go so far. But there was also an opportunity to create something on par with the late Mel Brooks’ portrayal of Yogurt in Spaceballs, and ESPN whiffed on that.

As Paulsen pointed out at Sports Media Watch, the gold standard for kids-themed alternate broadcasts is Nickelodeon’s Jan. 10 telecast of the NFL Wild Card playoff game between the Chicago Bears and New Orleans Saints. That effort drew an average of 2.06 million viewers.

However, a direct comparison probably isn’t fair. An NFL playoff game was going to draw more viewers than a regular-season NBA contest, and some parents seemed legitimately interested in sharing the experience with their children. That broadcast was on a Sunday afternoon, rather than a Monday night while kids are still in school. Additionally, there was a very strong curiosity about what a Nickelodeon broadcast would look like with green slime and other goofy digital graphics on screen.

Yet maybe ESPN and Marvel will try this again, perhaps around the release of a new Marvel movie or Disney+ TV show. Producers and executives might have a better idea of what worked and what didn’t, what viewers liked and what they might want to see in a future broadcast.

What’s nearly certain is that we’ll probably see such a telecast again. There’s just too much corporate synergy to burn, too much Marvel, Star Wars, and Disney characters for The Walt Disney Company to sell.