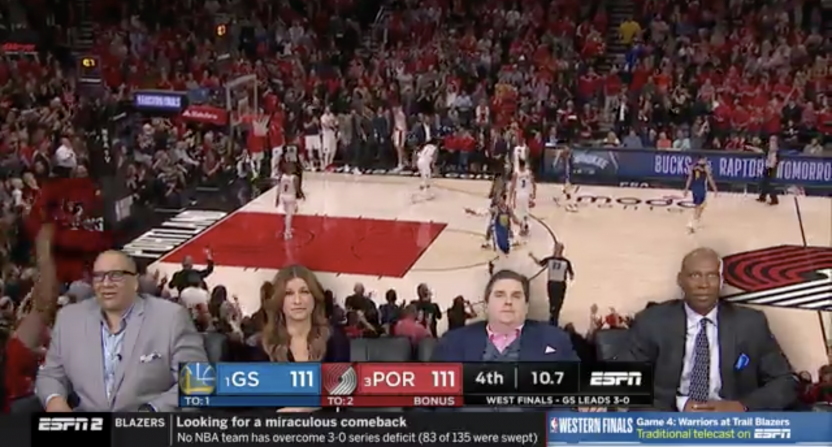 Everybody loves to see four people block the bottom third of their TV screen while they’re trying to watch a basketball game, right? That’s what anyone who watched Game 4 of the Warriors-Blazers Western Conference Finals on ESPN2 on Monday night saw.

The alternate feed on ESPN2 featured four rotating ESPN personalities watching and discussing the game, with their profiles superimposed across the bottom third of the screen.

The concept of alternate feeds for big games is not a new thing. ESPN has produced various alternate feeds each year for the College Football Playoff National Championship, but he difference here is that the on-air talent is superimposed onto the screen while we half watch them and half watch the game going on behind them. It almost seemed like going to a movie theater and having people in front of you blocking some of the screen, except they’re facing you in full color and you’re sitting at home.

Overall, the commentary itself was fine, but the presentation was so awkward and jarring that it killed whatever ESPN was going for with the alternate broadcast.

Most people compared the broadcast to Mystery Science Theater 3000, though with MST3K, you only see the backs of the commentators, they don’t take up a third of the screen, and they’re funny.

Not too sure about Mystery Science Theater 3000 – NBA Edition #NBAPlayoffs #espn2 pic.twitter.com/zlaE0HnUCy

This ESPN2 broadcast of the game is the nuttiest thing I've ever seen. Turn around and watch the game.
Reminds me of the old mystery science theater movies. Where are the robots?

Didn't even know they did this. pic.twitter.com/HVdaC4TFQE

What is ESPN thinking with this on ESPN2? I don't really care to hear their commentary let alone have to stare at their faces while trying to watch the game. Big fail! 🤣🤣 pic.twitter.com/6dnFeQOO55

Considering the main broadcast of Game 4 was on ESPN, it’s not as if this was the sole option for NBA fans (putting aside those who somehow thought this was the only broadcast). But if ESPN wants to roll out alternate broadcasts for NBA games in the future, they should probably take a page from the College Football Playoff Megacast and just show the personalities watching the game in a separate window on the screen instead of throwing their heads onto a third of the screen over top of the game.