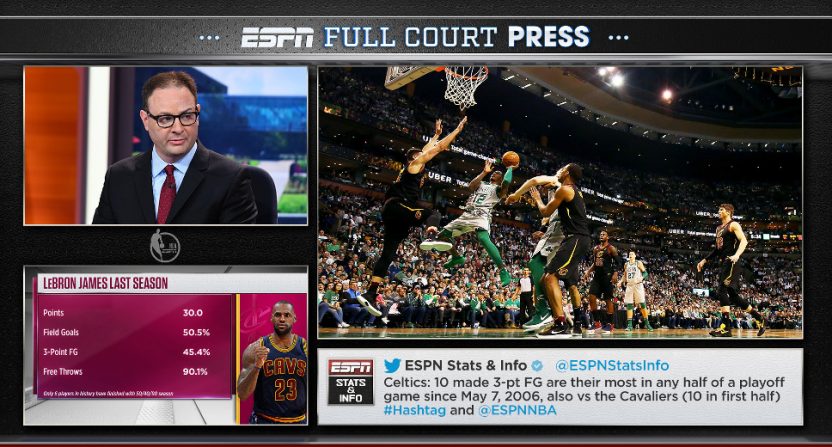 In a move reminiscent of some of the college football Megacast feeds with split screens of a game itself and ESPN personalities watching and discussing it, the network is offering a second-screen alternate coverage setup for Game 2 of the NBA’s Eastern Conference Finals between the Cleveland Cavaliers and Boston Celtics Tuesday night. The traditional game feed will be shown on ESPN beginning at 8:30 p.m. Eastern, with Mike Breen, Jeff Van Gundy, Mark Jackson and Doris Burke on the call, but ESPN2 will have an alternate feed called Full Court Press., which will carry on from the draft lottery coverage (on ESPN from 7:30-8:30 p.m. Eastern) and feature many of those personalities.

Here’s more from the ESPN release:

ESPN has expanded the NBA Draft Lottery telecast presented by State Farm this year to a one-hour show, airing from 7:30-8:30 p.m. on Tuesday, May 15. It will precede Game 2 of the NBA Eastern Conference Finals. For the first time, the Draft Lottery will be held in Chicago, Il. Chicago native Cassidy Hubbarth will host the event with several NBA and college basketball commentators, including Mark Jones, Jay Bilas and Adrian Wojnarowski.

ESPN will offer a special second-screen experience on ESPN2 during Game 2 of the Eastern Conference Finals, Tuesday, May 15, at 8:30 p.m. The second-screen offering is called Full Court Press and will feature ESPN’s NBA Draft Lottery commentators, including Hubbarth, Bilas, Wojnarowski, and Jones, as well as some special guests. They will watch Game 2 and provide wide-ranging analysis and perspective. Full Court Press will offer an array of on-screen graphics, including special stats and data, while including social media reaction to the game.

It’s interesting that they’re rolling that lottery coverage right into an alternate game feed, but it’s one that could have some appeal. And many of the personalities involved have some experience with unconventional broadcast settings; Wojnarowski previously did two years of the Vertical Draft Show at Yahoo, while Bilas was a star on the first ESPN Voices feed during the 2015 Megacast and Hubbarth co-hosts Cycle’s Buckets show with Rob Perez. The additional on-screen graphics look to be a key part of this too, as you can see from the image ESPN sent over above of what the screen will generally look like.

Alternate feed options are becoming a bigger and bigger part of sports broadcasting these days, and they have some clear advantages. They can provide something else for viewers tired of the traditional broadcast, and it might be particularly interesting to see what these commentators have to say about the game. These alternate options can also let networks boost the profile of their commentators. And considering that Woj and Bilas both seem likely to have a big role in ESPN’s combine coverage, and possibly its draft coverage as well, this is a good way how they interact in a longer event broadcast.

This is also a way to see how many of the fans that these commentators have will tune in to watch their analysis of a game in progress. We’ll see how this works out for ESPN, but it’s a relatively low-risk option (ESPN2 real estate isn’t that valuable when there’s a NBA playoff game on ESPN proper, so it’s a spot where some experimentation makes sense). And it’s one with some potential upside, and if it goes well, it’s something we might see more of down the road.