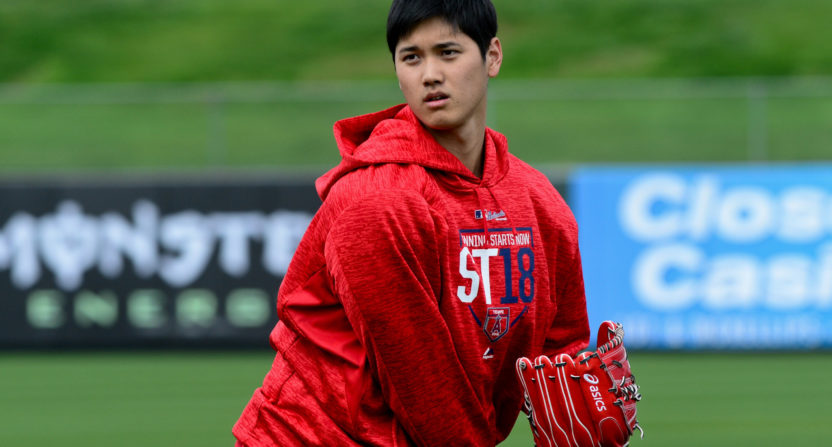 In anticipation of its fantasy baseball product opening next week, ESPN on Wednesday morning unveiled its strategy for two-way phenom Shohei Ohtani. Similar to CBS Sports but diverging from Yahoo Sports, ESPN will use Ohtani as one rostered player, eligible as both a starting pitcher and as a utility player for the 2018 season.

Before each scoring period, depending on whether you play in a weekly or a daily league, owners will be able to choose whether to start Ohtani as a hitter or pitcher and get credit for his stats depending on where you place him in your lineup.

With Ohtani’s team, the Los Angeles Angels, going with a six-man rotation to start the season, Ohtani will be in a similar situation as he was in Japan, pitching once a week and making a few starts per week in between as the designated hitter.

Awful Announcing spoke with Pierre Becquey, ESPN’s deputy editor for fantasy and esports, as to how the site came to its decision and how Ohtani will impact the sport in numerous ways.

“The idea was to allow users to use Ohtani in ways that a Major League Baseball franchise would, while remaining true to the fundamentals of fantasy baseball,” Becquey told Awful Announcing, “which is that hitters get you hitting points even if they pitch, and pitchers get you pitching points even if you hit. It was about balancing what traditional fantasy baseball with the excitement and newness of Ohtani and how we believed our players wanted to use them.”

Becquey said that he and other members of ESPN’s editorial and product teams for fantasy began to discuss the Ohtani situation last August, in what he called a collaboration with everyone who touches the fantasy product. They understood the short and long-term ramifications of this decision and wanted to get it right, Becquey said.

“I believe that we were very determined to allow Ohtani to be a single player because that’s what the story is with Ohtani,” Becquey said. “He’s a single player coming to Major League Baseball, and so we want our players to be able to draft him as a single player.”

As for differing with Yahoo Sports’ approach, Becquey said that they’ll do their thing and ESPN will do its thing, but Becquey added that he’d have “a really hard time thinking of a scenario where Ohtani should be two players.”

What makes Ohtani so unique, Becquey said, is that he’s one rostered player who will function as two, a starting pitcher and a utility hitter. So instead of having to drop someone for a hitter or a pitcher on a given day, Ohtani serves those dual roles.

“In Ohtani’s case, because on a day he’s not pitching and you know he’s hitting,” Becquey said, “if you have an ability to put him in your lineup…then you can do that and it doesn’t cost you. You don’t have to drop anyone.”

Now that Ohtani is eligible as both a starting pitcher and a utility hitter, he’ll gain further eligibility just like any other player would. If he accumulates at least 10 games in the field at a position, he’ll gain eligibility at that position. If he somehow makes at least five relief appearances, he’d be eligible there, too.

And the same goes, Becquey said, for any other pitcher who somehow makes appearances at DH, like, say, a Madison Bumgarner. If Bumgarner spends 10 games as a DH, then in ESPN fantasy, he’d be utility eligible.

That same logic would apply, similar to CBS Sports for this year, to players like Tampa Bay Rays prospect Brendan McKay or Cincinnati Reds prospect Hunter Greene, who could end up being two-way players as they make their way to the major leagues.

“The concept of having a player who can be deployed either as a pitcher or as a hitter in the ESPN fantasy baseball game has now been addressed,” Becquey said. “So once we establish that and you set the rule, as long as we’re playing by the same rules, to me that’s the right way to do things. So yes, if these guys come up and at the beginning of the year we have enough reason to believe they’ll be deployed as two-way players then we will assign them that eligibility, and the mechanism is there for them to earn it themselves.”

For ESPN, Ohtani will be the first ever player to receive credit as both a hitter and a pitcher on its Player Rater tool, a tool that judges players against replacement-level players in your given league. Figuring out what to do with Ohtani was for Becquey, “the most fun debating how we should treat him on the Player Rater than I had on this job in the last 10 years.”

Since Ohtani’s primary position on ESPN will be as a pitcher, Player Rater will rank him against replacement-level pitchers and add anything he does as a hitter as a bonus, rather than also rate him against replacement-level hitters. The only downside for having Ohtani’s primary position be a starting pitcher is that for leagues that use only batters, Ohtani will not be available in the player pool.

“We use the word game-changer often in a non-literal sense, but Ohtani really is changing the way that baseball is going to play the game,” Becquey said. “It’s really exciting to have a player come in and create this buzz around baseball.”