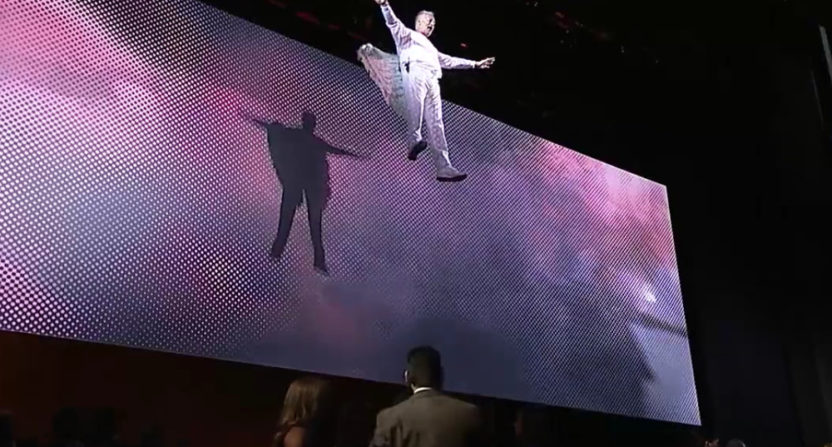 TV’s annual upfront presentations are close upon us, where networks take different tactics to try and convince ad buyers of the merits of their content, and Variety‘s Brian Steinberg has a look at what ESPN’s approach will be this Tuesday. As per Steinberg, it’s going to be heavily focused on emphasizing that much of its programming is watched live rather than on DVRs (where it’s easier for viewers to skip through commercials):

The Walt Disney-controlled sports-media giant intends to remind advertisers at the start of TV’s annual “upfront” presentations that 98% of the viewing of content across all its distribution points is done live. “It is C-five minutes,” says Ed Erhardt, the company’s president of global sales and marketing, making a reference to the industry’s typical ways of measuring commercial viewing.  Advertisers typically pay based on “C3” and “C7,” or views of commercials up to three days or a week after they originally air.

In doing so, ESPN is backing away from taking swipes at digital counterparts – as it has done in campaigns timed to the upfront market in 2017 and in 2016 – and instead putting the focus squarely on its own offerings. Last year in May, ESPN ran an ad campaign aimed at media buyers reminding them of its “brand safety” attributes at a moment when many were questioning the transparency of digital outlets.  In May of 2016, ESPN launched an ad campaign telling people to watch ESPN live rather than streaming a movie, scanning a social-media site for friends’ birthdays or sharing pictures of food – seeding in viewers’ minds the notion that ESPN content is fresh, live and perishable, while new-media activities on smartphones and tablets can always be done later.

“Advertisers want to be part of the real-time conversation that goes on between consumers and content,” says Erhardt. “The more real-time that you are the more valuable your environment is.”

It seems smart for ESPN to back off a bit from the targeting of movies and digital outlets, especially as they’re going more and more into digital themselves with ventures like ESPN+ and also expanding their own social media presences with shows on Twitter and Snapchat. Plus, plenty of that movie streaming involves streaming of titles from corporate parent Disney. And emphasizing the delivery of live viewers makes some sense, as that’s a way to get people to actually watch ads and is a key advantage for sports in the DVR age, part of why rights fees just continue to rise.

But something to wonder there is if it’s worth emphasizing that sports are mostly watched live over and over again, as that message has been played for years. ESPN’s done that extensively as a theme of their upfronts, and ESPN competitors have done so as well. Fox’s 2017 upfronts were heavy on sports with a similar message (and also saw Terry Bradshaw, Jimmy Johnson and others rapping for some reason), and both CBS and NBC have often sold that message too, specifically around the NFL and the NCAA tournament for CBS and around the NFL, the Olympics, and the NHL for NBC.

Advertisers aren’t stupid; they’re presumably well aware of how people use DVRs these days, and of the differences between live and delayed programming. At this point, “It’s live!” sounds a whole lot like “It’s toasted!”, a lovely catchphrase that doesn’t actually mean much:

Of course, there’s a potentially more interesting subset of this away from the big games, around the studio programming. That 98 percent figure covers that as well, and illustrates that plenty of people turn on the likes of SportsCenter, Pardon The Interruption, or whatever else live; there’s not a whole lot of delayed viewing of shows that are so specifically focused on the day’s news. And that’s an area where ESPN can stand out from the competition, as while CBS, NBC and Fox all have cable networks with studio shows, those are a pretty low point of emphasis for them relative to the broadcast network, and most don’t post ratings close to what many of ESPN’s shows do.

It sounds like ESPN is playing up live viewing overall, and maybe they’ll get some positive results from bumping their studio shows this way. And maybe this will be a little more interesting than it sounds: we know that Kenny Mayne, who flew in as the “angel of advertising” last year, is involved again:

.@Kenny_Mayne is the Don Draper of our #ESPNUpfront. Last year he was the Angel of Advertising. No telling what he will do tomorrow, but it will be funny. pic.twitter.com/eJDEMjvsOZ

Steinberg’s piece notes that ESPN has other advantages. Aided by industry standards shifting to total audience delivery, counting streaming viewers as well as those on cable, and with the increased embrace of out-of-home viewing at locations like bars, gyms, and hotels, ESPN’s ratings are looking pretty good, with their average primetime audience in 2017 rising seven percent to 2,058,000 viewers and their total day audience rising one percent despite losing close to a million subscribers by Nielsen’s estimates from February -December 2017 (and around another 700,000 since then).

So ESPN has programming that’s attracting audiences, and the amount of people watching it live certainly can be a selling point. It’s just worth wondering if advertisers are tired of the “It’s watched live!” message sports broadcasters are trying to sell by now, and of hearing more talk about Live than any time since “Lightning Crashes” ruled the radio airwaves. And the mass-market ad campaigns haven’t necessarily won fans over either, with “Life Needs Sports” not making too much of a splash so far. Maybe this will be more impressive when it’s actually gussied up, perhaps with touches like a flying Mayne or with pitches on why ESPN’s sports programming is more enticing than that of its competitors. For now, though, it sounds like mostly more of the same.