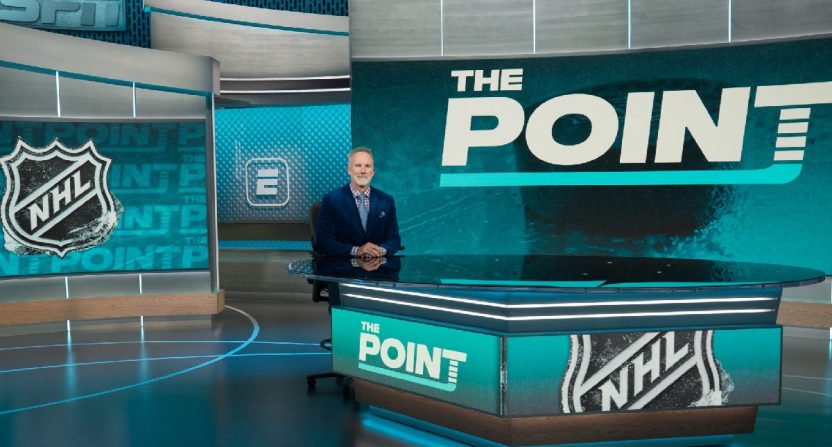 With ESPN back in the hockey world this year as the league’s new rights deals kicking in, a few things were likely a given.

Obviously hockey would have more of a presence across various existing ESPN platforms and properties; synergy is synergy, after all. In addition, a new studio show was always a safe bet; having a flagship program is a strong sign of support when bringing a new or returning sport to Bristol’s portfolio. And, hey, if ESPN is launching an NHL studio show, John Buccigross would probably be the top candidate to host, right?

If you somehow actually did spend time speculating about that in a vacuum, first of all, you’re in the right section of the Internet. Second, you were correct on all counts, as ESPN today announced the launch of The Point, a weekly studio show covering all things NHL hosted by, you guessed it (and the headline of this article already revealed it for SEO purposes): John Buccigross.

The Point debuts October 7th, and after a multi-show opening week (presumably part of an impending ESPN hockey blitz) will settle in to a weekly slot at 3 PM Eastern on Thursdays on ESPN2. There’s also a lot of teal.

The Point premieres October 7 at 5 p.m. ET on ESPN2 live from Studio F in Bristol, Connecticut. Then, as part of ESPN’s NHL Opening Week programming, the show moves to daily shows on ESPN from October 12-15. Preceding the 2021 NHL FaceOff doubleheader on October 12, The Point travels to ESPN’s Las Vegas studio for the 3 p.m. ET show, and Amalie Arena in Tampa Bay before the 7 p.m. ET show leading into game coverage. For the remainder of the week, The Point heads back to Bristol for daily shows at 3 p.m. ET on ESPN, before moving to its weekly home at 3 p.m. ET on ESPN2.

The Point will surround ESPN’s live coverage of NHL games with exclusive access and can’t-miss content, including look aheads at key matchups, trends within the NHL and hockey lifestyle coverage. Produced by the creative minds behind E:60, The Point will tell impactful stories from players, teams and personalities around the NHL. Buccigross will ready viewers for upcoming games alongside ESPN’s unmatched on-air team, with news, analysis and spirited discussions. The Point will also endeavor to dig deeper—on issues in the sport, on the game’s most intriguing and compelling personalities, on the world of hockey in general — hockey culture, hockey lifestyle — with access anywhere a puck is dropped.

“Our goal is to make The Point essential viewing for hockey fans”, said executive producer Andy Tennant. “Our approach is informed by our experience as sports storytellers.  The features will go deep – telling the story of the NHL as only our team can.  And in John Buccigross, we have the perfect host.  He has credibility with every hockey fan—and his knowledge and passion for the sport, along with his skills in this role, give us the foundation for everything we’re doing.”

Buccigross added, “If NHL 2Night had a child it would be The Point. Like any good parent, our goal is to make this hockey kid even better than its parents. Stoked to get going!”

As someone who sort of misses the ability to throw on Baseball Tonight or NHL 2Night as easy evening watching and a more enjoyable way to keep up with ongoing sports than, say, Twitter, let’s hope this show does well enough that a nightly recap version becomes viable at some point.