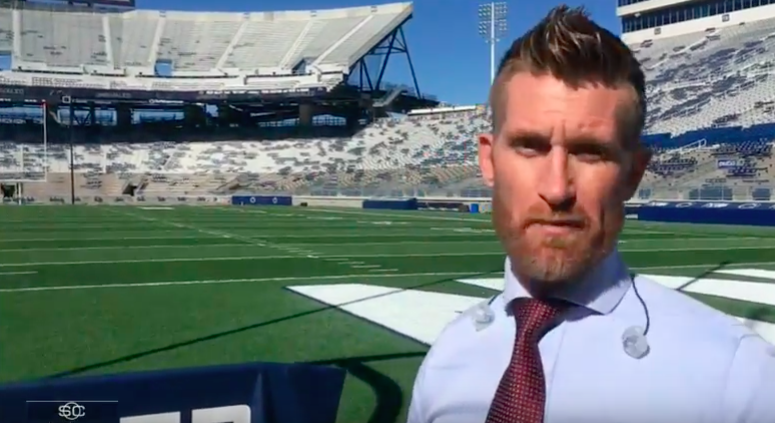 Reporter Marty Smith has been one of the rising stars at ESPN over the last several years. Originally joining as a NASCAR reporter, it could have been expected that Smith would depart Bristol for either Fox or NBC once ESPN lost the rights back in 2014.

However, instead of letting Smith go to another network, ESPN kept Smith on board. And they not only continued to use him to report on NASCAR, but also expanded his role into a roving national reporter and storyteller covering a number of different sports. Smith has taken hold of the opportunity and seen his presence to continue to grow over a number of ESPN platforms.

And that will continue for the next few years as Smith has signed a new contract with ESPN. Via the Roanoke Times:

ESPN has cut loose a number of reporters and anchors in recent years, but it is keeping Marty Smith in the fold.

Smith, a Giles High School and Radford University graduate, said Wednesday he has signed a new multiyear contract with ESPN.

He will continue to serve as a reporter for ESPN’s “SportsCenter” and “College GameDay,” covering college football and other sports. He will keep hosting his monthly ESPN2 interview show “Marty Smith’s America.” And he will continue to co-host his Saturday morning ESPN Radio show “Marty and McGee.”

“My greatest passion is storytelling. … There’s nowhere, as far as I’m concerned, in media, but certainly in sports, that compares to ESPN,” Smith said in a phone interview from the University of Alabama, where he is covering the Crimson Tide football team as it prepares for the College Football Playoff title game. “I’m very blessed that the … executive staff believed in me and offered me a new deal. It took about eight seconds to sign it.

Smith has grown into one of the best storytellers and interviews for ESPN ever since expanding his role beyond NASCAR. What’s even more interesting about Smith is he’s not like most others on ESPN airwaves because of his southern accent. Bristol deserves credit for being a much more diverse place recently in terms of their on-air presentation and while something like Marty & McGee might not fall into that category at first glance, it’s been a refreshing addition to the ESPN lineup. And sure enough, Smith actually credits his accent for helping him to stand out from the pack.

Former Pulaski County High School, Virginia Tech and NFL place-kicker Shayne Graham recently tweeted that he feared his accent would have held him back if he had pursued broadcasting, so he respects Smith for embracing his accent.

“That Southern accent thing, not only was it not a detriment to me, it ultimately became a benefit because it separated me from the pack,” Smith said.

Smith’s ESPN duties used to be confined to reporting on NASCAR. He covered Cup racing for “SportsCenter” and the now-defunct shows “NASCAR Countdown” and “NASCAR Now.”

But ESPN lost its rights to televise Cup races after the 2014 season. Instead of parting ways with Smith, ESPN moved him to a new role. He began covering a variety of sports for “SportsCenter,” enabling him to interview the likes of Michael Jordan and Alabama football coach Nick Saban.

Smith’s meteoric rise at ESPN has perhaps been symbolic of the new era of ESPN reporters. While we’ve seen ESPN be hit by wave after wave of layoffs, they have had to find personalities who can contribute across a number of different platforms to provide increased value for the network. That’s the harsh reality of the budget constraints that ESPN has been under while facing significant challenges.

Smith not only can still cover the biggest NASCAR stories for ESPN (like Dale Earnhardt Jr’s retirement) but he can also cover college football and tell interesting stories from across the world of sports. And he can serve as a reporter, interviewer, radio host, and the face of his own television show. In many ways, Smith personifies this new era of ESPN.