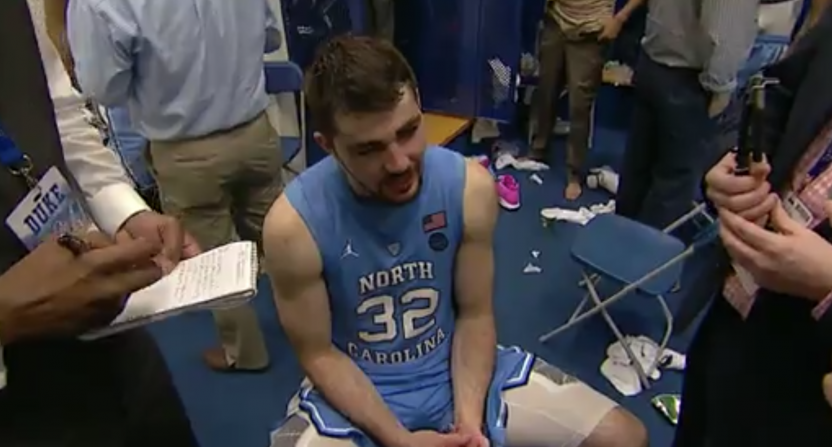 Well you clicked on this, so this is on you now.

In the moments after UNC’s upset of Duke, viewers with amazing eye sight, viewers with really large HD or 4k televisions with brightness settings cranked all the way up, and viewers who were weirdly paying close attention to the background of an interview with Luke Maye were treated/subjected to the rarest of events on TWWL when a player’s penis made the briefest of appearances.

We don’t know whose penis it was. It doesn’t really matter. It happened. The internet saw it. If you’d like to do also see it, you can click here. I’m told we might have promised advertisers there would be no dicks on this classy website.

As you can see, it’s pretty hard to spot at first. It’s like looking at 3-D art. Really have to work to see it, but it’s definitely there. Not really a good look for ESPN production, who quickly backed out of the shot, but not before the internet took notice.  It is what it is, a penis on ESPN.

ESPN caught a dick slip on camera in the UNC locker room.. 😳😂

Worst part is, I could tell it was going to happen and could not turn my head fast enough.. 🤦🏻‍♂️

Lmao WTF @espn why r u so into the locker rooms of these college kids? Media had @NBA level of presence. That UNC player's dick was just aired on ESPN!

Nice work by @espn to get a UNC players dicks on live TV. 🤦🏻‍♂️

Lol @espn just showed a guy’s dick on live tv. Seems like the perfect way to end a blowout when our best player gets hurt.

Thanks @espn for that penis shot.

Dude. ESPN just showed a Penis on live TV when a player was changing in the locker room. Is this gonna be talked about at all?!! #penisgate

What are you doing @ESPN? Get your cameras off the penis. #dukevsunc

That’s about all we got here. Carry on.