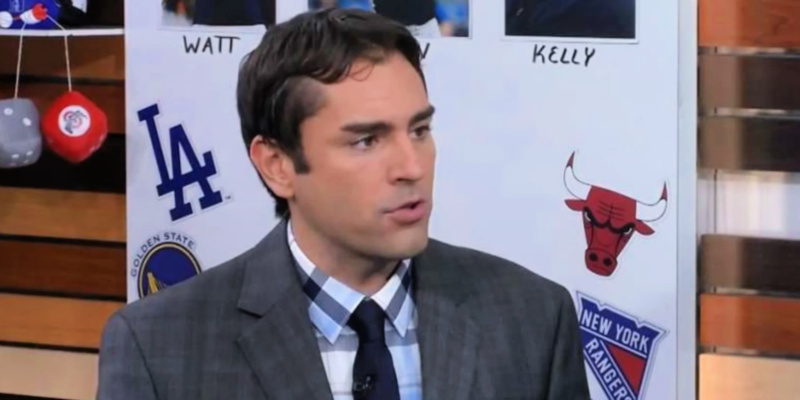 It’s been noticeable for years (particularly since Brett McMurphy was laid off in the massive April 2017 cuts) that ESPN-affiliated reporters have not been breaking most of the news in college football. As AA’s Ben Koo explored in early December 2021, that’s a sharp contrast to sports like the NFL and NBA where ESPN employs an insider they can credit on the Bottom Line ticker for most signings or moves (Adam Schefter and Adrian Wojnarowski, respectively). But that’s about to at least partially change, with Andrew Marchand of The New York Post reporting Wednesday that ESPN is set to hire Pete Thamel from Yahoo:

Pete Thamel will move from Yahoo Sports to ESPN, according to sources, to assume the insider/breaking news role that Schefter plays on the NFL, Adrian Wojnarowski handles on the NBA and Jeff Passan mans for baseball. Like Passan, Thamel will write more than Schefter and Wojnarowski.

…During this recent onslaught of college coaching moves, Thamel was omnipresent on Twitter breaking transaction after transaction, including the shocker that Notre Dame’s Brian Kelly was headed to LSU.

It absolutely makes some sense for ESPN to add a bigger name in college football reporting who breaks more national news. Yes, their current stable of college football reporters break some of the news out there, and they do good work on exploring more in-depth issues. But a lot of the particular national breaking news comes from figures outside ESPN, including McMurphy (formerly of Stadium, now at The Action Network), Ross Dellenger (Sports Illustrated), and Thamel (at Yahoo since 2017, at SI and The New York Times before that).

ESPN has shown in the NBA, NFL, and MLB (to some extent; we’ll discuss that more in a moment) that they value people who break transactional news in particular, as that lets them credit themselves on the Bottom Line ticker and in ESPN.com stories about various moves. That hasn’t been the case in college football. And as Koo discussed in December, that’s interesting considering that college football is the one of those sports where ESPN has the highest percentage of rights (and even more so in the postseason, with bowls and the College Football Playoff). For even ESPN-owned bowls, they’ve had to cite outside figures like McMurphy for cancellations:

Still weird to me that ESPN not only airs almost all of the bowls but actually owns most of them and despite that all of the newsbreaking on the Covid front is done mostly by a handful of reporters they don’t employ.https://t.co/LnJbjR3GP5 https://t.co/hBP9eenFqW

However, there is the question of how much news Thamel will actually break. Marchand is correct that Thamel has broken a significant number of transactions, but from an outside estimating perspective, it doesn’t feel like he breaks as many notable national stories as McMurphy and Dellenger do. (Like most qualitative judgements, that could be wrong, and if there’s particular data that says otherwise, we’d be interested to see it.) Now, granted, all of those people work for different outlets and do slightly different jobs with presumably different priorities. And Thamel does do a lot of column-writing at the moment, more so than McMurphy. And it’s possible that he starts breaking more news now that he’s at ESPN, especially if that’s now a key focus of his role. But it doesn’t seem completely assured at the moment that this move will allow ESPN to break the majority of notable national CFB stories in-house; they’ll definitely get more than they did, but whether they move to the top or not is more debatable.

And that’s a notable part of the inclusion of MLB insider Passan in the previous discussion, and in Marchand’s piece. Passan (signed by ESPN in 2019, re-signed last fall) does not break the volume of transactional news Schefter and Wojnarowski do, and probably doesn’t break the most in the sport, but still breaks a decent amount. He also seems to do more issue-based news breaks and in-depth news story or column writing than Schefter and Wojnarowski (of those two, Wojnaroski seems to do more writing, but not as much as Passan does). And it sounds like Thamel will be asked to do some of the in-depth news story/column-writing work at ESPN as well, as per Marchand’s piece. And that’s a natural fit considering Thamel’s past work at SI and at Yahoo. Like Passan, Thamel also seems like a good fit for appearances on SportsCenter and other studio shows.

So this may work out quite well for ESPN if the goal is “Hiring Pete Thamel to be the Jeff Passan of college football.” Based on records to date, it seems quite likely that Thamel can be a top-five college football insider, and he can maybe move up that pecking order even more with ESPN’s prestige on his side. It also seems like a good fit for him to continue writing columns and news stories the way Passan does. But the idea of Thamel as “the Adam Schefter of college football” is a little harder to imagine at the moment, as that doesn’t feel like his status at this point. (That’s not entirely a bad thing, as there are plenty of issues with Schefter, but he does have a reasonable amount of transaction news dominance; his closest competitor is NFL Media’s Ian Rapoport, and Schefter seems ahead there in volume of news breaks.) Regardless, though, this is certainly a big swing by ESPN at breaking more news in college football, and it will certainly help them to get at least some more of those news breaks in house. We’ll see how this plays out.

[The New York Post; photo from a Q+A Thamel did with The 33rd Team last fall]