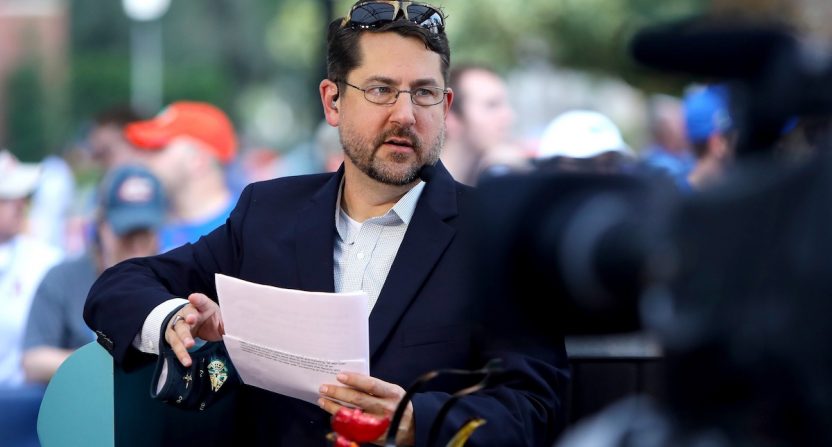 With ESPN taking over the media rights to the top-tier SEC football package beginning in 2024, it probably shouldn’t be a surprise that one of the network’s primary voices covering the scene will be sticking around for years to come.

Ryan McGee has agreed to a multi-year contract extension with ESPN. He’ll continue in his current roles with SEC Network, ESPN Radio, and ESPN.com as part of the deal.

McGee co-hosts Marty & McGee with Marty Smith on SEC Network and ESPN Radio every Saturday from 9 a.m. to 10 a.m. ET. Additionally, he appears on a variety of network programming including SportsCenter, College Football Live, SEC Nation, and SEC Now, and is a senior writer for ESPN.com.

“I’ve worked for ESPN in some way, shape or form for my entire adult life and I’m beyond thrilled to keep it going,” said McGee in ESPN’s official announcement. “It’s family and I’ve always tried to do my work in a way that honors that family, my ESPN mentors and coworkers of past and present… even the ones who made fun of my accent when I first moved to Bristol right out of the University of Tennessee. Y’all know who you are.”

When McGee says he’s worked for ESPN “for my entire adult life,” he’s not kidding. In fact, his tenure with the network is longer than some might realize. Along with the announcement of his contract extension came the revelation that McGee wrote for ESPN for two years under a pseudonym. As reported by the Knoxville News Sentinel‘s Adam Sparks, McGee authored articles for two years with a byline credited to “Al Covington.”

Why write under a different name? From 2001 to 2003, McGee was employed by Fox Sports Net, producing Totally NASCAR while also working as editor-in-chief for NASCAR Media Group. So writing for ESPN might have been frowned upon at the time.

Former ESPN president John Skipper came up with the idea of McGee continuing to contribute content for the network where he’d spent the previous seven years, producing rpm2night for ESPN2 and contributing to ESPN The Magazine. As McGee explained to Sparks, “Al Covington” was a combination of his wife’s and mother’s maiden names.

“My wife (Erica), her maiden name was Allen. And my mother’s maiden name was Covington. So the bosses at (ESPN) The Magazine came up with that name,” McGee said. “It lasted just long enough to say that my streak of working for ESPN was never broken.”

Among the pieces still on ESPN.com with a Covington byline are this NASCAR column, in addition to blurbs for ESPN The Magazine‘s “NEXT” series on athletes ready to break out in 2002 (Jimmie Johnson) and 2003 (Greg Biffle).

No word on whether or not Skipper set any informal statute of limitations on revealing Al Covington’s true identity. But with Skipper leaving ESPN nearly four years ago and McGee signing a new contract, apparently it was deemed safe to reveal the truth.

During his career, McGee has won five Sports Emmys and authored three books — Sidelines and Bloodlines, The Road to Omaha, and ESPN Ultimate NASCAR, while also working with Dale Earnhardt Jr. on his memoir, Racing to the Finish.

The University of Tennessee grad returns to Knoxville to host Marty & McGee and appear on SEC Nation this coming Saturday (Nov. 13) as the Volunteers host No. 1 Georgia.