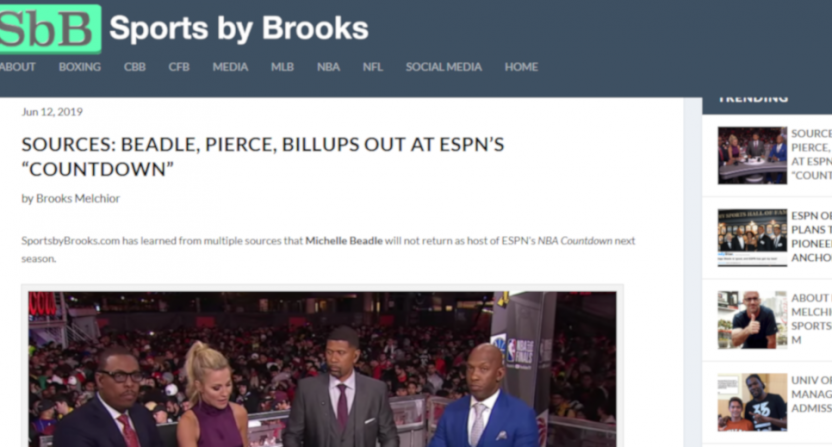 There’s plenty of discussion out there about possible changes to ESPN’s NBA Countdown, and that all started because Sports by Brooks’ Brooks Melchior wrote a piece Wednesday citing multiple sources saying Michelle Beadle will not return as host next year, and Paul Pierce and Chauncey Billups will not return as full-time analysts (but Jalen Rose will). That piece also cites multiple sources saying “ESPN on-air talents Maria Taylor and Rachel Nichols are under consideration to take over as host of Countdown.”

However, there are lots of reasons for some skepticism here.

Putting aside the discussion of the credibility of this report for a moment, let’s talk about if this is a reasonable move for ESPN. It would be just the latest change to Countdown, which they moved to Bristol and then to New York during the second half of last year to coincide with Beadle moving cross-country for Get Up, and which they then sent back to Los Angeles before the start of the 2018-19 season. That came with Beadle leaving Get Up and signing a multi-year contract extension with ESPN to “return to Los Angeles to focus on the NBA.” So on that front alone, it would seem curious to replace Beadle, given that she’s just finishing her third season in the host role and that she just signed a contract extension.

Also, Nichols and Taylor both have prominent roles of their own (Nichols as the host of The Jump, Taylor as a contributor to Get Up, as the host of College Football Live, as a sideline reporter for college football and men’s college basketball broadcasts, and as an analyst for women’s college basketball and volleyball broadcasts). Tabbing either of them for Countdown would create a further shuffle. And while ESPN’s done those kinds of shuffles in the past, this one would seem particularly odd considering that Nichols and Taylor both seem to be finding success in their current roles, and that there isn’t an obvious need to make a change.

There’s also a discussion to be had about if further changes would help Countdown, as many of the past issues with the show have stemmed from significant turnover. Off-again on-again off-again appearances from Magic Johnson didn’t help much, and the show also changed significantly following Bill Simmons’ 2014 exit for the short-lived Grantland Basketball Show. Beadle took over as the full-time Countdown host from Sage Steele in 2017, and the show has seemed to find more of an identity since then. Shaking that up without an obvious reason to do so would seem like an unusual move, and one that could easily make things worse.

And with that in mind, let’s talk about where this report came from. Melchior broke some notable news in his initial run with Sports by Brooks, including of Arkansas making an offer to Les Miles in November 2012 (news that prompted ESPN to send an infamous “IMPORTANT: DO NOT CREDIT SPORTS BY BROOKS” memo). But the site stopped posting new material in late 2012, and Melchior then vanished from Twitter the next year, leading plenty to wonder what happened to him.

Then in 2016, Jeff Pearlman tracked down what happened to Melchior and wrote 10,000 words on it, but didn’t actually run the story. And Pearlman said months later “one of the editors said ‘I just don’t feel comfortable with this because it feels like a mental health illness'” and “I’ll just say sometimes people go away for a reason.” Pearlman then posted and later deleted the lede to his story in 2017. Melchior then reemerged on Twitter in 2018 with cryptic football tweets, then did an interview with Adam Schefter where he talked about working on a documentary about Jackie Robinson’s football career and the origins of college football, but not much else.

And while Melchior’s since brought back the Sports by Brooks website, he’s never really discussed where he went for five years; he certainly doesn’t have to, but that gap doesn’t really boost his credibility, especially with Pearlman’s comments out there. And Melchior’s pieces since his return have seen some pushback, especially an April report titled “ESPN OBEYS MASTERS: PLANS TO BAN PIONEERING BLACK ANCHOR” (about Sage Steele) that ESPN took the unusual step of responding to with “All aspects of this report are entirely and completely false.” We obviously don’t know if that report actually was accurate or not, as ESPN hasn’t revealed their 2020 Masters coverage plans yet, but the degree of that denial was unusual.

So that all seems to add up to a report that there are some reasons to question, ranging from its author to if the rumored moves make any sense for ESPN. Of course, it absolutely could be true; networks do make studio show shakeups regularly (as Countdown‘s history shows), even some that seem illogical from the outside. But this is an extremely unusual way for that report to show up, especially considering that all of these multiple sources who know what’s happening are supposed to have spoken to Melchior and not to the other reporters who regularly cover ESPN. Even four hours after Melchior’s initial report, there’s nothing bolstering it from other media sources.

Update: ESPN sent the following statement along in response to a request for comment on Melchior’s report.

“Our whole NBA team is doing a great job and remains focused on an incredible NBA Finals and tomorrow night’s Game 6. We have made no decisions about what we are doing next season. After the season, and as we do with every sport, we will sit down and plan our entire NBA content offering across platforms.”