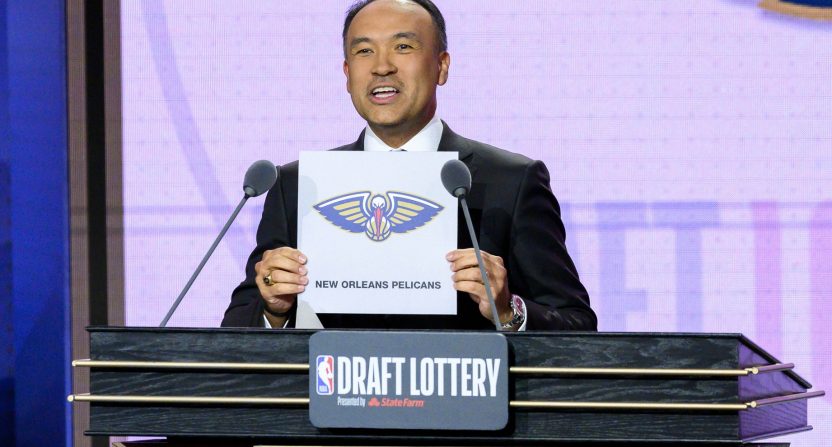 With the coronavirus pandemic still raging on and the NBA playoffs taking place inside the Orlando bubble, Thursday’s NBA draft lottery is going to look a lot different on ESPN than it would during normal times.

Originally slated for Chicago, the top picks in this year’s draft will be announced and broadcast remotely from several different locations. The lottery broadcast will be only 30 minutes long, from 8:30 to 9 p.m. eastern, as part of a playoff quadrupleheader, so things are going to move quickly and won’t drag on like in years past when this show was 60 minutes. Rachel Nichols will anchor coverage from Los Angeles, with Jay Williams in New York, Jay Bilas in Charlotte, and Adrian Wojnarowski inside the bubble providing analysis.

Nichols will be interviewing NBA commissioner Adam Silver from the NBA’s Secaucus, N.J. office, which is where deputy commissioner Mark Tatum will be revealing the lottery results. The show will also feature an interview with Steph Curry, who will serve as the Golden State Warriors’ lottery representative.

The network said that all 14 lottery representatives will appear on the telecast via an unmanned ESPN-provided camera kit to ensure the safety of the reps and the smoothness of the broadcast like it did for the NFL draft. There will also be interviews with top draft prospects Anthony Edwards and LaMelo Ball during the half hour show and a quick analysis of all the projected top picks for the Oct. 16 draft.

Following all that, Tatum will reveal the draft order that will have been previously determined in a drawing also taking place in Secaucus. This will, of course, be the first year where team representatives won’t see the draft order drawn behind closed doors before the official announcement, possibly opening themselves up for some baseless online conspiracy theories depending on how the lottery order shakes out.

Thanks to injuries to Curry and Klay Thompson and Kevin Durant’s departure to Brooklyn, Golden State is tied for the best lottery odds with Cleveland and Minnesota at 14%. That’s followed by Atlanta at 12.5%, Detroit at 10.5%, New York at 9%, Chicago at 7.5%, and Charlotte at 6%, rounding out the eight teams who did not qualify for the Orlando bubble.

This is the second year of the NBA’s new lottery odds to curtail tanking, with the worst three teams getting just a 14% shot at the top pick rather than the worst team having a 25% chance in years past. Last year’s lottery proved to be incredibly chaotic. New York, Cleveland, and Phoenix tied for the best chance to draft either Zion Williamson or Ja Morant and none of those teams won the lottery, with New Orleans and Memphis getting the top two selections despite each team having just a 6% shot at number one.

Unlike last season with Zion, there isn’t necessarily a consensus top pick this year, and teams won’t have as many games to go on in evaluating talent after the pandemic led to the unprecedented cancellation of this year’s NCAA Tournament. But ESPN’s 30-minute telecast appears to be jam packed with interviews and analysis, ensuring a frenetic and chaotic draft lottery that will surely feel like a whirlwind for the fans of non-bubble teams who have waited more than five months for Thursday night’s proceedings.