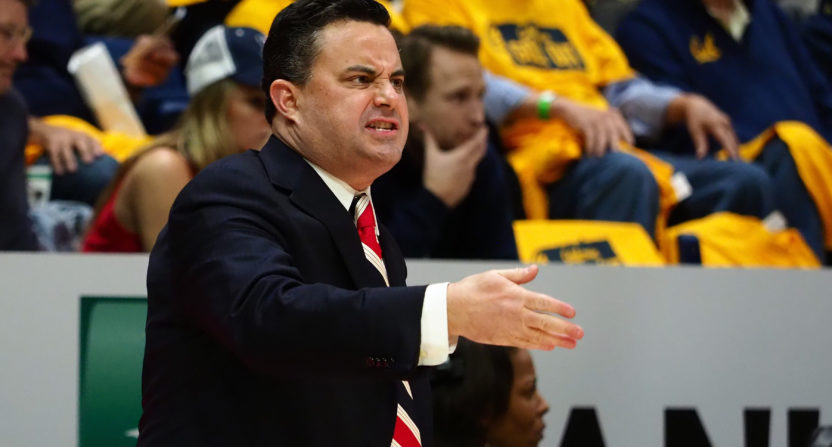 Sean Miller is not coaching tonight’s Arizona basketball game against Oregon, after reports that FBI wiretaps intercepted phone calls in which Miller discussed paying Deandre Ayton $100,000 to ensure the star recruit signed with the Wildcats. ESPN’s Jay Bilas said on Saturday morning that he “can’t imagine [Miller] ever coaching in college again.”

Well, during the first half of Saturday night’s Arizona State-Oregon State game on ESPNU, play-by-play man Steve Quis said that Miller was “relieved of his duties from the University of Arizona.”

“We have breaking news from Arizona. Sean Miller has been relieved of his duties from the University of Arizona.”

So, all of the viewers — and of a PAC-12 game, surely with many Arizona fans watching — were under the impression that Miller had been fired.

But in the second half, Quis said that their report of Miller’s firing was incorrect. Quis claims that it was an “inadvertent report from the press row [at] Oregon State.”

“We had an inadvertent report that we apologize for, saying that Sean Miller had been fired. That was an inadvertent report from the press row here at Oregon State earlier tonight. So, we regret that information passed along. But today, here are the facts. It’s the one time in my life I’m thankful I’m not an air traffic controller to put things in perspective.”

Now, as Bilas suggested, it’s still hard to see Miller coaching at Arizona or anywhere else anytime soon. But, at the moment, he’s still the Arizona head coach. And if Arizona does fire Miller with cause, it’s going to be a very expensive firing.

JUST IN: Sean Miller’s contract, as written, somehow pays him more for getting fired with cause than without cause. So if Miller is fired with cause, Arizona will owe him approximately $5 million more ($10.3 million versus $5.15 million) than if they fired for no reason.