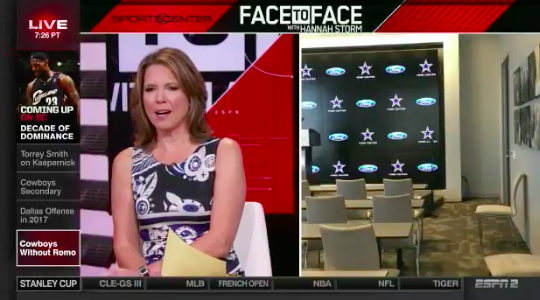 Here’s something you don’t see every day. Hannah Storm was talking to ESPN NFL Nation Cowboys reporter Todd Archer who was on site at the team’s facilities yesterday.

As Storm is talking about Tony Romo’s retirement and move into broadcasting, Archer just randomly decides to walk away from the live shot, leaving Storm laughing and wondering if he went to search for Romo.

One of my favorite SportsCenter moments in a while. @toddarcher goes to look for Tony Romo mid liveshot with @HannahStormESPN #LiveTV pic.twitter.com/0IZaixSPx9

Was he really looking for Romo? Did he just think that his duties were done and he wasn’t on camera anymore? Did he have to use the restroom? Storm was still asking what happened to Archer after the segment on Twitter.

Archer hasn’t tweeted about the segment, so we’re all left wondering about the mystery as to why he walked away from a live SportsCenter hit. Maybe he raced off in search of the real covfefe. Is that how you use covfefe in a joke?