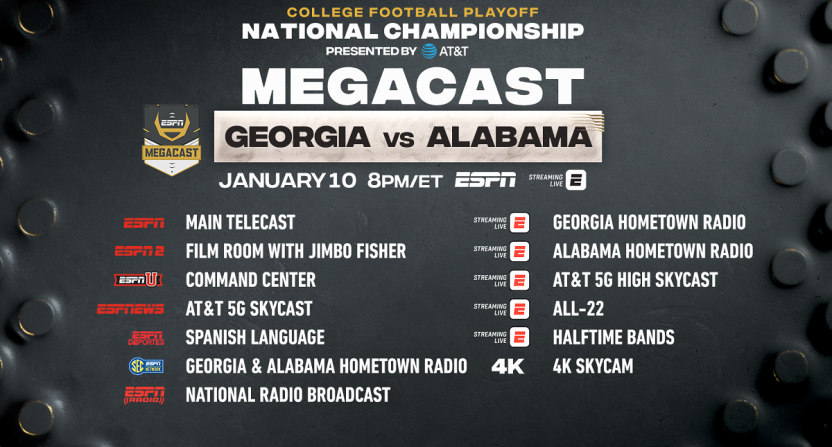 The coverage strategy undeniably makes the game feel like an even bigger event than it already is, and while obviously not all of the network’s alternate offerings are for everyone, everyone interested in the game to any degree should be able to find something to enjoy.

The network released details today of their channel offerings, including the return of the Film Room channel. In the past that’s been staffed by a variety of college head coaches, though this season it will instead be just one head coach and his own staff of assistants. That coach: Texas A&M’s Jimbo Fisher, the only coach to beat Alabama this season.

Whether this move was driven by pandemic protocols or not, it kind of makes sense; it was a lot of fun watching a group of different big name head coaches hang out and eat pizza, but a staff of coaches who all know each other and regularly break down film together could also make interplay and analysis more natural and free-flowing.

As for the rest of the options, here’s ESPN’s release:

Command Center on ESPNU features a multi-angle presentation, which includes up to four different vantage points at any one time, with statistics and real-time drive charts supplementing the game action.

MegaCast mainstay AT&T 5G SkyCast moves to ESPNEWS this year, with Anish Shroff and Kelly Stouffer providing commentary and context out of commercial breaks before throwing back to the sounds of the game. The popular view from above the action and behind the offense on most plays will also have replays shown regularly throughout the presentation. Additionally, the Skycam viewing option will also be available in 4K on Comcast, DirecTV, YouTube TV and Verizon.

The Spanish-language telecast (ESPN Deportes) and Hometown Radio (SEC Network and the ESPN App) remain staples of the MegaCast, with the All-22 viewing angle and AT&T High SkyCast also available digitally.

Hometown Radio(SEC Network and ESPN App)
Fans can listen to the local radio broadcast of each team, with their audio feed synced up with ESPN’s presentation. This MegaCast feed is made possible in conjunction with Alabama Crimson Tide Sports Network Powered by LEARFIELD and the Georgia Bulldog Sports Network. SEC Network will carry the Alabama feed in the first half and the Georgia feed in the second half, with both radio broadcasts available in full on the ESPN App.

All-22 (ESPN App)
Watch the game the same way players and coaches study film, with a vantage point high above the field of play. The angle allows for the 22 players on the field to be seen at all times, providing the ability to distinguish how plays develop. Commentary will be provided by the ESPN Radio broadcast.

There’s also the matter of on-field production, as ESPN is bringing all the toys at their disposal:

ESPN’s camera complement will include dedicated cameras on Alabama head coach Nick Saban and Georgia head coach Kirby Smart at all times, as well as unique camera placements providing views of the teams as they enter the field. The Goodyear Blimp will provide aerial shots of Indianapolis and Lucas Oil Stadium.

More than 100 microphones will be placed throughout the stadium, capturing the sounds of the game and atmosphere of the crowd, enhancing the game telecast.

In addition to offering plenty of options for game producers and viewers alike, that kind of encompassing coverage could have a real impact on the game itself if a key replay decision is required. In any case, this is one of the most impressive things ESPN does every year from a production and technical standpoint.