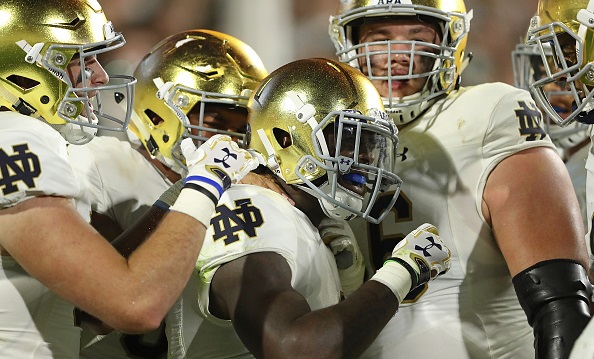 Iowa delivered Ohio State an emphatic second loss last Saturday. The defeat all but knocked the Buckeyes and the Big Ten East out of the College Football Playoff. Ohio State not being in the field could have serious ramifications for ESPN’s ratings. Surveying the remaining options, ESPN should root for Notre Dame to win out and make the Playoff.

Playoff ratings were spectacular the first year. Semifinals between Oregon/FSU and Ohio State/Alabama drew viewership (28.2m and 28.3m) higher than most BCS title games. The Ohio State vs. Oregon final (34.1m) drew the second-highest viewership for a title decider since 1991.

Since then, however, playoff viewership has plummeted. Both semifinals lost nearly 10 million or more viewers from year one. Alabama/Clemson I drew only 25.7m viewers, lowest for a championship game since the LSU-Alabama rematch. Viewership rose a bit after 2016. But both semifinals drew fewer than 20 million viewers. Alabama/Clemson II attracted only $26 million. ESPN didn’t commit hundreds of millions per year just to goose the Fiesta and Peach Bowl ratings.

Moving to New Year’s Eve was a predictable and comprehensive disaster. The game conflicted with work schedules and much of the country already having New Year’s Eve plans. Fortunately, the Playoff is moving off New Year’s Eve after this year. Playing on a Saturday, natural college football time, may ameliorate that effect somewhat this year.

But the product also plays a role. Getting brand-name programs into the field is essential. There are not that many of them. Seven title-deciding games since 2000 have drawn 28m or more viewers. Four of the games featured Ohio State. Two of the three that hit north of $30 million – 2006 Rose Bowl (35.6m) and 2010 BCS (30.1m) – involved Texas. The seventh was the first Playoff semifinal with two Heisman-winning quarterbacks.

SEC fans watch the playoff regardless. So while Alabama is a massive brand, the Crimson Tide don’t draw any more fans than Florida or Auburn. The one SEC effect seems to be a notable turn-off for viewers when the game involves LSU. Three of the four lowest viewership games since 2004 – 2004 Sugar Bowl (23.9m), 2008 BCS (23.1m), 2012 BCS (24.2m) – featured the Tigers.

The only other teams on the Texas/Ohio State level for audience are Michigan – the Rose Bowl win over Washington State (29.0m) has outdrawn every title-deciding game since that did not involve Texas or Ohio State – and Notre Dame. The Fighting Irish reached the 2013 BCS Championship game against Alabama. It was perhaps the least competitive championship game in recent memory. It still drew 26.4m viewers, higher than much better games in the last two playoff finals.

This season’s Playoff buildup may entertain. The committee may face a contentious decision. But the actual Playoff could get very bleak.

Games between regions are better than games within regions, and compound that when it is a rematch. Oregon vs. Auburn in the 2011 BCS game (27.3m) drew a larger audience than LSU vs. Alabama Part Deux in 2012 (24.2m). Not all regions are created equal. Not having the SEC and/or Big Ten can be devastating to viewership. The two games that drew less than 22m viewers were Miami vs. Nebraska (21.6m) and USC vs. Oklahoma (21.4m).

This Playoff looks set to be regional- and rematch-heavy. Alabama and Georgia will meet in the SEC title game. If both reach the game undefeated, it’s likely both teams will reach the Playoff. Clemson, a de facto SEC team from an SEC state, looks set to come out of the ACC. The Tigers have also met Alabama in the final the past two seasons. Those games did not draw great and this time would be without Deshaun Watson.

This Playoff may be devoid of buzz and storyline. The first Playoff had Marcus Mariota, Jameis Winston, Cardale Jones’ crazy run, Saban vs. Meyer, etc. But the next two were relatively boring. 2017’s edition could be the worst of the four. The most prominent star would be Baker Mayfield (sort of) in the event Oklahoma makes it. The most significant narrative, a potential Saban/Smart pairing, would already have been oversold building up to the SEC title game.

Notre Dame would not be a complete panacea. Nobody wants to watch them get buzzsawed by Alabama again. Georgia would still be a rematch. Stylistically, Notre Dame is similar to Alabama, Georgia, and Clemson — dominant running teams that play good defense. But the Irish bring a substantial casual audience, some narrative juice, and a national interest others contenders would not. If you’re rooting for ratings, you probably should root for Notre Dame to beat Miami. Expect the tinfoil hat crowd to come out in force if the Irish make it controversially.