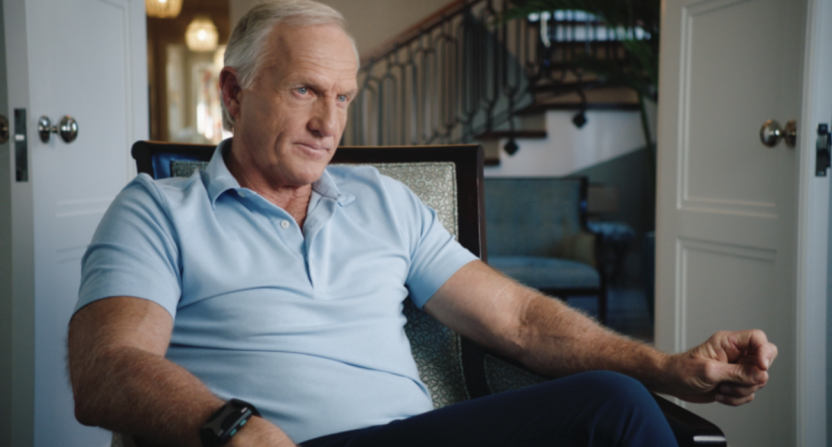 At the end of February, ESPN announced the premiere date for Shark, a 30 for 30 installment focusing on Greg Norman’s legendary collapse at the 1996 Masters.

Originally set for Tuesday, April 5th, the film (directed by Jason Hehir and Thomas Odelfelt) features Norman going through that final Sunday and also touches on his tortured history with the course, club, and tournament that eluded him. Considering ESPN’s Masters coverage begins in earnest on Wednesday, April 6th, with the Par 3 Contest, leading into their exclusive Thursday and Friday broadcasts, running a 30 for 30 with such deep tie-ins to the Masters the day before made sense on multiple levels.

But on Monday, ESPN announced that they’re bumping the film’s premiere date back two weeks, to April 19th. In its place, ESPN will air a previously non-national NBA contest between the Milwaukee Bucks and Chicago Bulls.

From ESPN’s note announcing the change:

Due to a programming schedule change, the upcoming ESPN Films 30 for 30 “Shark” will now premiere Tuesday, April 19 at 8:30 p.m. ET on ESPN. The film will be made available on ESPN+ immediately after its premiere, along with the rest of the 30 for 30 library.

In our initial post on the release date, we noted that it’s odd timing for a Greg Norman-centric film to be coming out considering his current role in the world of golf: serving as the front man for a Saudi government-backed golf league that is attempting to position itself as a rival to the PGA Tour.

It was Phil Mickelson’s dabbling with that Saudi venture (along with admitting his own hypocrisy given Saudi Arabia’s appalling human rights record) that’s led to Mickelson’s current ostracization from the sport. Just in the past few weeks, Norman penned a bizarre open letter to PGA Tour commissioner Jay Monahan (it opened with “Surely you jest!”, always a sign of serious business), while the aforementioned LIV Golf Invitational announced its first wave of events, with some planned for the United States.

Norman also went on the record in November defending Saudi Arabia with, among other things, an anecdote about how he saw women in restaurants while visiting.

It’s unclear yet who will be participating in these big money tournaments, but there will likely be a smattering of somewhat recognizable older players (who can afford to risk a lifetime PGA Tour ban for a one-time payout) and a larger group of international players who you likely haven’t heard of before.

Either way, it’s an odd time to have a documentary scheduled that puts Greg Norman on primetime ESPN ahead of one of the biggest television events in golf. Especially when ESPN’s rights deal with the PGA Tour just kicked in, and most especially when Augusta National most likely has zero interest in legitimizing this entire operation. The PGA Tour doesn’t control the Masters, to be clear, but that doesn’t mean that they aren’t fairly close allies, and Norman’s actions throughout have not endeared him to many within the current golf power structure.

Put another way, Phil Mickelson still makes a lot of people in the golf world a lot of money, and he’s been gone for weeks now, with sponsors dropping him and no return in sight. If being publicly associated with this venture made Phil that toxic, it’s hard not to draw conclusions as to Norman’s standing at the moment.

Again, this isn’t breaking any news, it’s just looking at the facts of the situation. ESPN has a vested interest in generating as much promotion for their Masters coverage as possible, they have a Masters-centric installment of their wildly popular 30 for 30 series in the can, and they announced a release date plan just last month. That they deciding to punt it two weeks down the road. And, sure, Bucks-Bulls is a fun game, and ESPN has plenty of interest in their juicing their own NBA coverage too.

Considering the clear tie-ins to Masters week (and the fact that they’d already announced the release date), it feels like just bumping Shark over to ESPN2 would seemingly have made for a much smaller programming headache, while also keeping it thematically relevant. Doing that would have allowed it to debut on ESPN+ as well. (Frankly, they could have even debuted it solely on ESPN+ and given it a linear release a few weeks later, barring some kind of unlikely contractual arrangement.)

Instead, though, they’re bumping it to April 19th, during the first round of the NBA playoffs, after MLB’s makeshift 2022 opening day, and with no related golf major to boost interest. Directly after the film’s subject put his face on a Saudi-backed sportswashing effort that threatens the current status quo of multiple ESPN rights partners, a story big enough in the world of golf that it could threaten to overshadow the Masters itself.

Feel free to draw your own conclusions.