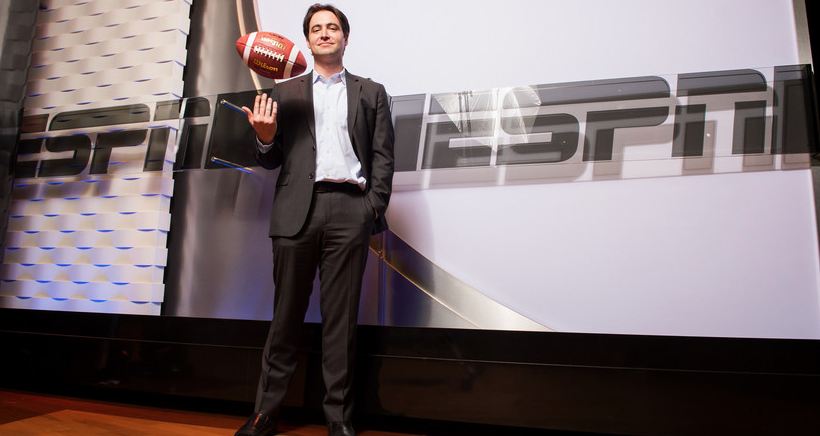 Ilan Ben-Hanan is a tremendous leader with an 18-year track record of success at ESPN. He is a strategic thinker who applies a deep passion for sports, a focus on growing our business and people, and a steady thoughtfulness to his work. He has never been satisfied with the status quo, and that’s helped us on numerous occasions improve and evolve our programming strategy on behalf of our mission to serve sports fans.

Today, I am pleased to share that Ilan has been promoted to SVP, Programming & Acquisitions, filling the vacancy left by Rosalyn Durant – primarily overseeing ESPN’s College Networks business. Ilan brings a vast amount of college sports experience to the role – as he was previously VP, College Sports Programming, and has overseen ESPN’s college football and basketball categories along the way as well. He has well-developed, positive relationships with many current conference commissioners, collegiate presidents and athletic department officials, as well as with the coaching community. He previously managed the rights acquisition activities for ESPN’s entire college sports portfolio, including the College Football Playoff, the Rose Bowl Game, more than 30 different conference relationships, and the NCAA. He is known throughout the intercollegiate athletics industry for his leadership, creativity, dedication and expertise.

Ilan joined ESPN in 2002 as a programming associate for college basketball and the X Games, taking on progressively more challenging roles every few years. He was named to his most recent role as VP, Programming & Acquisitions in March 2017, tasked with the strategic scheduling direction of ESPN’s linear networks, while working across teams to determine how we can emphasize major programming initiatives to maximize ratings and business impact. Ilan is particularly proud of ESPN’s expanded live sports portfolio on ABC; the launch and growth of ESPN’s annual ESPN8: The Ocho and ESPN Dog Day initiatives; and of course, the continued growth of Jimmy V Week, which he conceptualized in 2007. Last year, oversight of ESPN’s sports betting content was added to his plate, which led to the launch and expansion of Daily Wager, as well as responsibility for ESPN’s relationship with the NHL.

This is notable on a couple of fronts. For one, the SVP (programming and acquisitions) role is a significant one; as mentioned above, Magnus (now one of the more important ESPN executives on the rights negotiations side) held it in the past. Beyond that, it’s interesting that Durant (who had been with ESPN since 1999 and had overseen the college networks herself) is shifting to the parks side of Disney. Disney does frequently have its executives move around and gain experience in other divisions (for example, current ESPN president Jimmy Pitaro was Disney’s chairman of consumer products and interactive media before taking the ESPN job in March 2018, and new Disney CEO Bob Chapek was formerly the company’s chairman of parks, experiences and products), so that’s not that unusual, but it is significant to know that Durant’s now focused on parks and that Ben-Hanan will be filling her role of overseeing college networks.

And there are a lot of interesting things going on with the college networks business. The ACC Network launch has generally gone pretty well, but there’s still one big provider without it; Comcast. The SEC Network has reasonably good carriage at this point, but the Longhorn Network doesn’t, and there are still lots of questions about what’s ahead for it. Ben-Hanan will now be overseeing those networks (in addition to continuing to lead the content strategy and scheduling team), and while he’ll still be based in Los Angeles, he’s picking up some notable extra responsibilities with the oversight of the college networks. We’ll see what changes, if any, he implements in this new role.