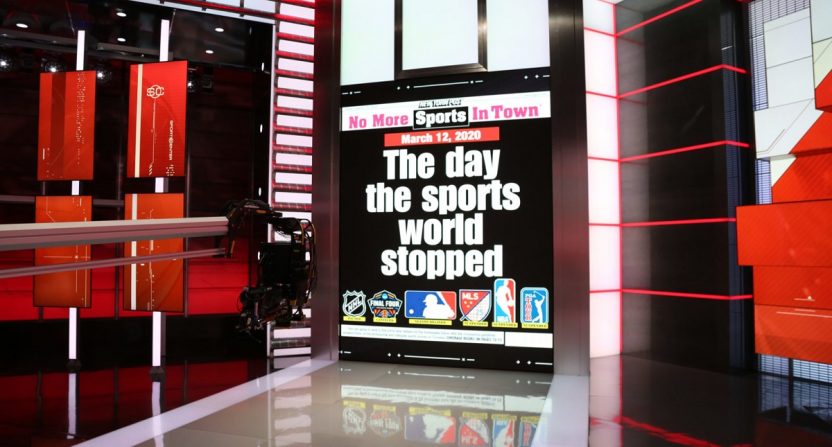 Burke Magnus is ESPN’s EVP of programming acquisitions and scheduling, which means he and his team have had to do a lot of work on the fly in the last few days as the sports world has been upended by COVID-19.

With the coronavirus pretty much all sports everywhere canceled, postponed, or suspended, along with production shutting down on various ESPN in-house shows, the network schedule had to be scrapped and rebuilt.

People have had a lot of questions and suggestions about what ESPN should be showing in the meantime, from classic games to the possibility of moving up The Last Dance, and Magnus spoke to ESPN PR’s Josh Krulewitz about the various challenges involved. And, yes, he addressed The Last Dance.

Magnus also gave some insight into what those first days were like.

Can you give people a sense of what the working environment was like for the programming team last Thursday?
We had an all-hands programming “war-room” environment in the big conference room on the third floor of ESPN’s Building 12. We had individual sport category programming teams relaying information as they were hearing it and also executing changes in real time, while the core content strategy group and our programming senior staff were making in-the-moment decisions.

We were also collaborating with colleagues in ESPN’s content and production areas to determine what was possible from a live studio perspective. By Friday, we began working from home for the foreseeable future, so we went from our most hectic on-site work environment one day, to relying on cell phone, email and text the next. While we were clearly concentrating on the work impact, we were simultaneously focused on the human impact, the personal impact as our teams were addressing all the critically important things happening in their own lives with schools closing and so much more.

A common suggestion from viewers has been to re-air classic events or exciting games from recent years (or even further back.) That could certainly lead to some fun shared experiences for viewers and be a bit of a placebo effect for live sports, but as Magnus notes, it’s easier said than done.

Can you explain in simple terms what rights you might or might not have to show re-airs of events from different leagues?
Re-airing full-game presentations is not a right that we or other media companies typically have at our disposal at all times. Each one of these circumstances requires individual conversations with the specific league or property to determine what’s possible.

Since we’ve heard from fans that would love to relive full-game presentations, particularly at this moment in time, we are exploring that possibility for events and content that we don’t have re-air rights already.

We are working with the leagues themselves to free up the possibility to show encore presentations and discussing how we can present them. In some instances, we aren’t even the original rightsholder, which is the case for the Men’s NCAA Basketball Tournament, for example. Event programming will continue to be supplemented by ESPN live studio and news programming, plus original shows and films.

And as to moving up The Last Dance, which we’ve reported is something ESPN and the filmmakers are trying to do:

Are any projects in the works that you are considering moving up the scheduled debut?
Overall, any original content project that we can conceivably move up, we are obviously considering that, including films. I know some have asked about The Last Dance and the reality is that the production of that film has not yet been completed, so we are limited there at the moment. Obviously, you can’t air it until it’s done.

It’s a fascinating look behind the scenes at a part of ESPN (and of any television network) that’s critically important but often overlooked. This is also going to be a new normal for Magnus and company for at least the near future, and their task isn’t enviable: fill multiple 24-hour sports networks without any sports.

It honestly sounds impossible, but we’re going to see them do it one way or another.