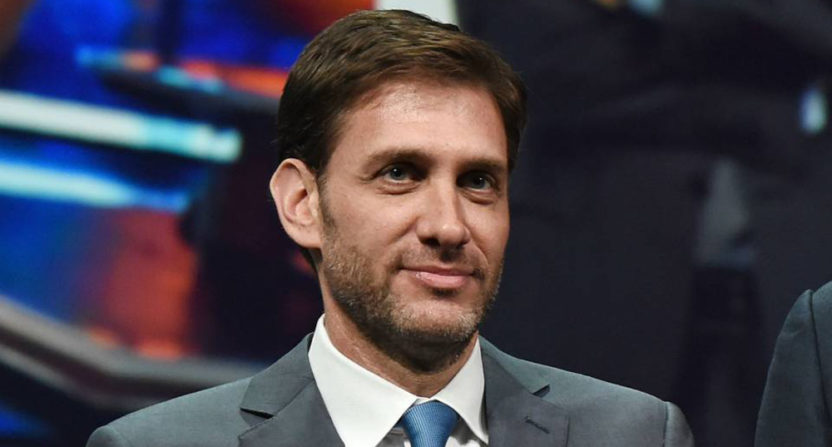 On Wednesday, ESPN unveiled a long list of content coming to ESPN+ in August and September. There are plenty of notable entries on that list, starting with yet another vehicle for Get Up host and once–and–future ESPN Radio host Mike Greenberg. That would be Bettor Days, which debuts September 3. Here’s more on it from that release:

Bettor Days is a dynamic show that takes a unique point of view on sports history — reliving it through the lens of a sports bet. From a Super Bowl win to a minor league mascot race — if there’s a game, someone has bet on it.  In each episode, ESPN’s Mike Greenberg sits down with a different bettor and hears the upbeat, fun, and comedic tales of bets with high stakes and unbelievable consequences.

“Of all the things I’ve been lucky enough to do in my time at ESPN, I’ve never had a chance like this to explore all the human drama and incredibly entertaining stories that happen when people decide to place a wager on the outcome of a sports event,” said Greenberg. “It’s an extra, rich layer of the sports experience that I can’t wait to share with fans.”

We’ll see if this winds up being a long-term thing for Greenberg like Get Up, or a shorter-term thing like his I’m Interested podcast (which ran for three months). But this is notable as ESPN finding another way to use Greenberg (and his reported salary of $6.5 million annually), and as them finding another way to do something focused on gambling. And ESPN+ feels like a good fit for this concept, at least at first; interviewing with particular bettors about specific past bets isn’t necessarily ideal for a wide TV audience, especially with it being so different from ESPN’s other programming, but there definitely could be people quite into this idea, so putting it on an on-demand streaming platform makes some sense.

In some ways, this sounds like a lengthened version of Scott Van Pelt’s Bad Beats segment, but with interviews with bettors (and presumably some interviews with winning bettors, not just losing ones). And that segment certainly has its fans. So if Greenberg’s able to make this work as a longer interview-focused idea, maybe it can find an audience. And other ESPN+ shows have moved to linear ESPN networks in the past, so that may be possible down the road too.

Beyond Bettor Days, one of the most interesting other items in this release is one that will be available much sooner. That would be Our Time: Oklahoma State Football, which is ‘s coming to ESPN+ this Thursday, August 13. Here’s the release blurb about it:

A new multi-part, all-access documentary series featuring head coach Mike Gundy and the Oklahoma State Cowboys football program. Premiering Thursday, August 13, on Big 12 Now on ESPN+, the series chronicles the completely unique circumstances of the Oklahoma State 2020 season – from navigating a global pandemic and pre-season controversy, to the urgency and uncertainty hanging over a new season with big preseason expectations and more. Our Time is produced by ESPN+, Sport&Story and JM Associates.

“Pre-season controversy” is a mild way to describe what happened in June when Gundy wore a One America News Network t-shirt (a network that has called Black Lives Matter “a farce“) and took criticism from Black Oklahoma State players like Chuba Hubbard and Amen Ogbongbemiga. That eventually even led to Gundy taking a paycut. And, interestingly enough, that controversy is what led to the first indication that this documentary was in the works. During that saga, Van Pelt’s SportsCenter (and then other ESPN platforms) played a clip of Gundy’s comments to the team, which came with a more substantive apology than he’d offered elsewhere. And that clip came from this not-yet-announced (at that point) documentary.

There are a lot of questions about this documentary, especially as this comes with some school involvement; it’s part of the expanded Big 12 rights deal ESPN signed last year, and is similar to Miles To Go, their previous series on Les Miles’ first season at Kansas. But the groups here are experienced; Sport&Story’s previous work includes Miles To Go, Being: Bret Bielema, Being: P.J. Fleck, and last year’s four-episode 24/7 College Football on HBO, while JM Associates has produced all sorts of outdoor and fishing shows for ESPN since 1980, and also produced Miles To Go with Sport&Story. We’ll see how this one turns out, but there’s definitely going to be some interest in it after Oklahoma State’s offseason drama (and with the current ongoing discussions on if the Big 12 will in fact play football this fall). Here’s a trailer:

Beyond that, ESPN+ is launching Roll The Tape September 7, with that show featuring ESPN’s Christine Williamson, Treavor Scales and Gary Striewski as they “watch campy sports footage from the ESPN archive and offer wise-cracking commentary, all from their 90’s-style living room.” Yes, that sounds somewhat similar to Cheap Seats, an ESPN Classic show from 2004-06 that Randy and Jason Sklar hosted in character as fictional ESPN librarians. And there are some similarities to other “watch people watching and mocking things” concepts as well, including Mystery Science 3000 and follow-on associated effort RiffTrax. But this idea is a little different, and there’s certainly plenty in the ESPN archive to comment on, with the show set to cover “celebrity arm wrestling, dog shows, street luge and paragliding, trapshooting, speed chess, hydroplanes and more.”

Also of note in this announcement is that ESPN is further expanding the Detail series. That series started with Kobe Bryant analyzing basketball tape, and Bryant and ESPN then expanded the concept to other sports, starting by bringing in Peyton Manning for a football version. Manning has done two seasons of Detail already and will return for a third this fall (and he’ll be on another season of the NFL Films/ESPN+ series Peyton’s Places this fall as well), but Cal Ripken Jr., Joe Montana and Wayne Gretzky are also joining the franchise, breaking down historical footage in baseball, football and hockey respectively. The series with Ripken Jr. will premiere August 17 with an episode on Dodgers shortstop Corey Seager.

And Quest for the Stanley Cup is returning to ESPN+. That behind-the-scenes documentary series on the NHL playoffs started on Showtime in 2016 and 2017, then moved to ESPN+ for 2018 and 2019. It will cover the final eight teams in the NHL playoffs, with a first episode premiering Sept. 2 and five more to follow. The Fantasy Show with Matthew Berry will be returning to ESPN+ as well.