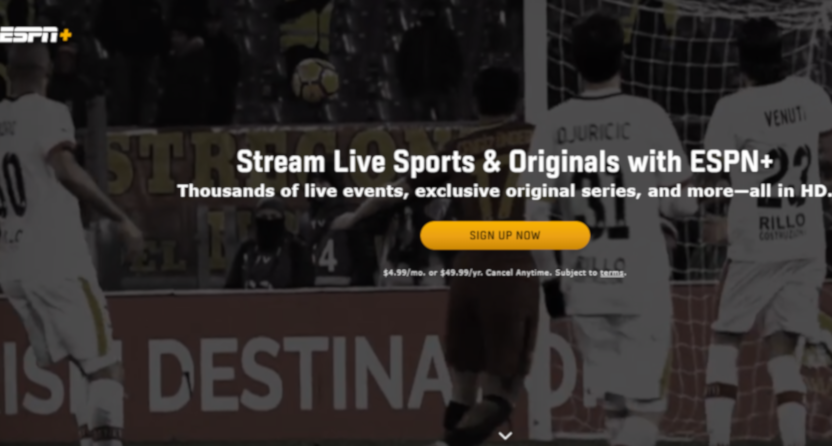 The subscriber numbers for ESPN+ continue to grow. On a Disney earnings call Thursday, Disney chairman and CEO Bob Iger announced that they now have 3.5 million paid subscribers for ESPN+, the direct-to-consumer subscription service they launched last April. That’s a significant growth over the 2 million paid subscribers they announced last February and the 2.4 million they cited in August. (It should be noted that the service has had some boosts beyond just people signing up for the streaming content, as it rolled in ESPN Insider subscribers last summer, but still, its growth to this point is significant.)

This comes after ESPN+ has picked up quite a few rights, including some Big 12 football games (the first Power 5 conference with games there). They’ve also turned it into somewhat of a digital conference network for the Big 12, complete with documentaries and over 800 events in total each year. Other things they have added this year include more American Athletic Conference games (across multiple sports), the U.S. Open Cup (soccer), and the Bundesliga (German soccer). And UFC content began airing on ESPN+ this year, and you now need a ESPN+ subscription to buy UFC pay-per-view events.

That doesn’t cover the other content ESPN has picked up since their 2018 launch. And there’s more to come from deals they’ve already signed, too, including a further expansion of Big 12 content next year and some PGA Championship coverage beginning next year. And the service is likely to only continue to add more and more content (including perhaps Sunday Ticket when those rights become available after the 2022 season) and to be a big part of future ESPN rights deals. Oh, and viewers can now bundle it with Hulu and with the new Disney+ service, so the numbers are likely to grow further from people who didn’t already have ESPN+ subscribing to that bundle for Disney+.

Of course, all of this comes at a cost. Rights are expensive, and Disney has put a lot of money into ESPN+ at this point. However, that’s not counting against the main ESPN bottom line for the moment; Bloomberg’s Eben Novy-Williams tweeted Thursday that ESPN+ falls under Disney’s direct-to-consumer division (which lost $740 million last quarter) rather than the cable networks division (which includes ESPN; ESPN did see a decrease in operating income there from higher rights fees, but cable networks as a whole still beat expected revenue estimates). The current loss in direct-to-consumer isn’t necessarily a huge blow for Disney, especially as ESPN+ has largely been seen as a test run for the bigger Disney+ to this point (and it’s also notable that there are plenty of rights split between ESPN and ESPN+, including those Big 12 and Bundesliga rights, so much of the accounting may be affected on how much of rights deals gets assigned to each division), but it does seem clear that ESPN+ is not currently making money on its own.

ESPN+ profitability doesn’t necessarily matter all that much at the moment, though. Especially in the run-up to the launch of Disney+, a lot of the ESPN+ talk has been about getting consumers to try a direct-to-consumer service and about making sure technical hurdles were figured out ahead of the Disney+ launch. And even after the launch of Disney+, it seems perhaps more important for ESPN to establish ESPN+ as the dominant U.S. sports streaming service (especially given competition from the likes of DAZN and B/R Live) than to have it make an immediate profit, particularly considering that ESPN+ and ESPN financials have a lot of crossover on those rights deals anyway.

With projections for expanded cord-cutting, too, ESPN+ (and Disney+) are also seen as key components of Disney’s future. They’re viewed as elements that could help boost the company even if cord-cutting continues to accelerate further. Of course, Disney would ideally like to keep people subscribing to ESPN and its other channels via cable or satellite while also having them sign up for ESPN+, especially as they got an estimated $16.10 per subscriber per month for their channels (including ESPN’s networks, FX, FXX, NatGeo, etc) in 2018, almost four times the current $4.99/month cost of ESPN+.

But if viewers do cut the cord and stop paying for linear Disney channels and then still sign up for ESPN+ and/or Disney+, Disney’s still getting some revenue from them. And those streaming platforms also provide the opportunity for Disney to pivot and put even more content (including perhaps even a feed of linear ESPN someday) direct to consumer in the future if the landscape shifts to a point where that’s desirable. From that standpoint, building the reach of ESPN+ and Disney+ is the most important thing right now. And these numbers look very good indeed on that front.