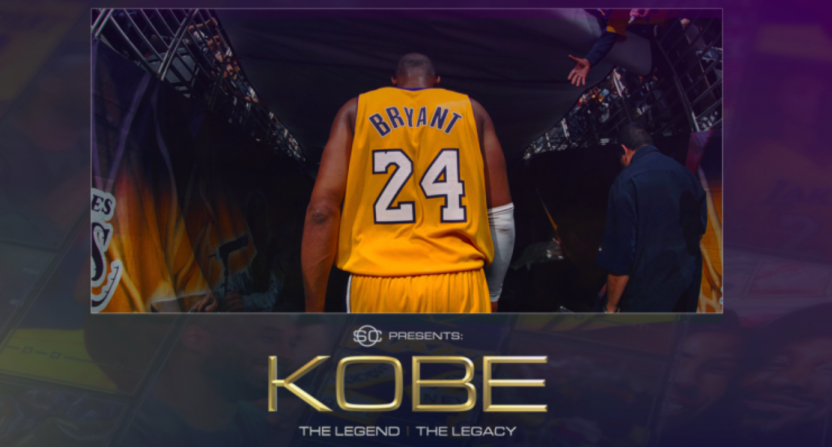 On January 26, 2020, retired NBA superstar Kobe Bryant was among nine people killed, including his 13-year-old daughter, when a helicopter crashed in Calabasas, CA. Bryant’s death at the age of 41 sparked countless tributes, remembrances, and stories about the five-time NBA champion and 18-time NBA All-Star.

Two days before the one-year anniversary of that tragedy, ESPN is honoring the legacy of the NBA legend with a prime-time special that will air Sunday night, January 24, at 9 p.m. ET. The special, dubbed SportsCenter presents Kobe – The Legend, The Legacy, will be hosted by Jeremy Schaap and Lisa Salters and broadcast from the Naismith Memorial Basketball Hall of Fame in Springfield, MA. Bryant is set to be inducted into the Hall of Fame sometime this year.

Over the hour, the program will look back at the many facets of the all-time great, including his bravado as a teenager entering the NBA directly out of high school and his historic career with the Lakers that led to five NBA championships. The special also will examine how after his playing days were over, Bryant shattered expectations by finding success in Hollywood and helping forge paths for the WNBA and women in sports, and sparking the #girldad movement.

Among those appearing on the special in some form will be WNBA legend Lisa Leslie, former Lakers teammate Pau Gasol, and former Lakers GM Jerry West. Stephen A. Smith will provide some thoughts on Bryant and his legacy while Snoop Dogg has planned a musical tribute to him.

The special will re-air across various ESPN networks afterward.

Before the special, ESPN has plenty of Sunday programming planned around Kobe as well. They’ll air a 90-minute edition of Detail at 5 p.m. that “ties together three special “Honoring Kobe” episodes of the ESPN+ program hosted by Phil Jackson, Pau Gasol, and Diana Taurasi breaking down classic games from Bryant’s NBA career.” Bryant’s last game from April 13, 2016, when the Lakers hosted the Utah Jazz, will play on ESPN at 6:30 p.m., leading into the special.

ESPN’s The Jump will also have a special two-hour episode remembering Bryant on Tuesday, Jan. 26, at 2 p.m.