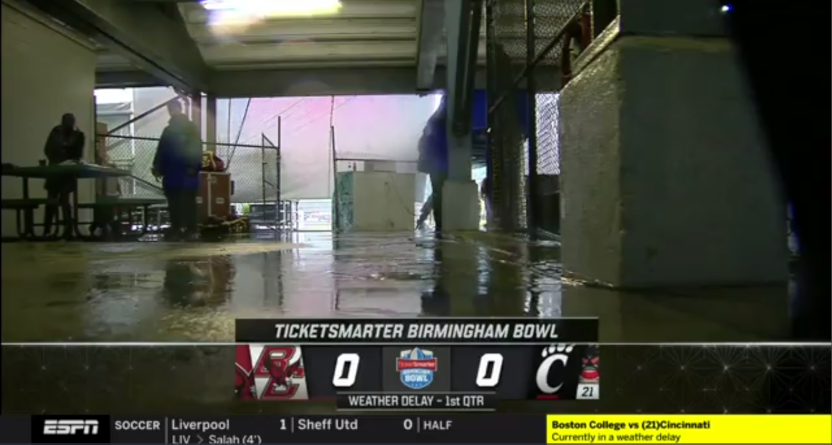 For the second-straight year, a Boston College bowl game has faced weather issues. Last year, the Eagles saw their Servpro First Responder Bowl (on Dec. 26 in Dallas against Boise State) game head into a weather delay in the first quarter thanks to lightning strikes, with Boston College leading 7-0 at that point. The game was eventually cancelled two hours later after continued lightning strikes, the first FBS postseason game ever cancelled thanks to weather. This year, the Eagles faced the Cincinnati Bearcats in the TicketSmarter Birmingham Bowl, but that game also wound up in a first-quarter weather delay following lightning strikes. (Update: The game resumed at 4:55 p.m. Eastern after around a ninety-minute delay.)

Here’s ESPN’s coverage of the delay announcement, followed by a throw to the studio for general college football discussion:

Here’s what things looked like on the field before the decision to suspend play:

After around 15 minutes of general college football discussion, ESPN reran the episode of NFL Live that aired earlier in the day. (Featuring Dan Snyder’s “Happy Thanksgiving” press conference opener again, to boot.) They also broke into it periodically to run and rerun this Birmingham Bowl update, which wasn’t much of an update:

This could still make for an interesting evening for ESPN’s channels. The main network has the Taxslayer Gator Bowl (Indiana-Tennessee, from Jacksonville) scheduled for 7 p.m. Eastern, so the resumed game could easily run into that. (It will only have a 10-minute halftime break, though, so it may not run too far into the next game.) Meanwhile, ESPN2 has the Under Armour All-America Game (featuring top high school prospects) beginning at 6 p.m. Eastern, and ESPNU has college basketball for most of the evening (Liberty-Florida Gulf Coast at 5 p.m. ET, North Texas-Western Kentucky at 7 p.m. Eastern). ESPNEWS has only studio programming scheduled, so it could see a game bumped there, but given that network’s limited distribution, putting a game there may wind up annoying some fans who don’t get the channel. We’ll see what happens.

[Update: 7 p.m. ET hit with just over 10 minutes left in the fourth quarter of the Birmingham Bowl, with Cincinnati up 31-6. The finish of that game was moved to ESPNEWS, with ESPN flipping to the Gator Bowl.]