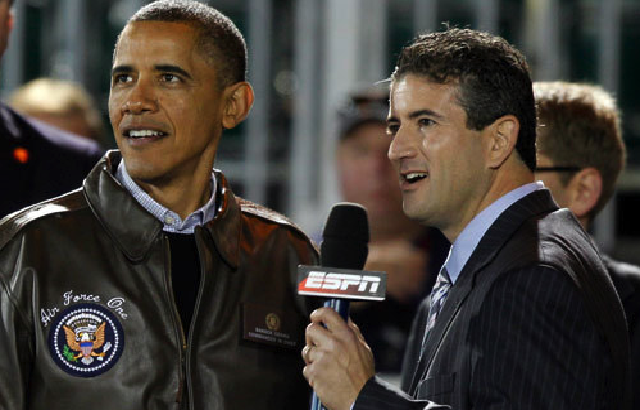 ESPN began 2016 by attempting to draw a line between sports and politics for several of its on-air personalities and commentators. But as the beginning of 2017 also brings the final days of Barack Obama’s tenure in the White House, the network is celebrating the outgoing president’s influence and presence in sports.

In accordance with Martin Luther King Jr. Day this coming Monday, Jan. 16, ESPN is paying tribute to Obama and his sports fandom on a special edition of SportsCenter. Here is what ESPN has planned for the occasion, according to the network’s official release.

** Obama’s love of basketball will be highlighted in a feature that includes his participation with ESPN’s Andy Katz in selecting brackets for the NCAA men’s and women’s college basketball tournaments during his presidency.

** The World Series champion Chicago Cubs will visit the White House on MLK Day, with the ceremony airing live on ESPN’s Outside the Lines at 1 p.m. Highlights of the event and other championship team visits during Obama’s presidency will air during SportsCenter.

** ESPN’s Michael Wilbon, co-host of Pardon the Interruption, discusses the significance and legacy of Obama’s presidency.

** Michael Smith and Jemele Hill, who will become anchors of the 6 p.m. SportsCenter beginning February 6, will discuss their visits to the White House and the impact Obama has had on sports and culture while in office.

** Various prominent sports figures will contribute video tributes to Obama that will air during SportsCenter.

This is surely going to raise eyebrows among those who believe ESPN has demonstrated liberal leanings in its coverage and programming, especially throughout the recently concluded presidential campaign. That said, ESPN did mention that president-elect Donald Trump would soon be getting similar coverage as well.

“Continuing ESPN’s long history of documenting the president’s sports connections, SportsCenter will air a feature on the sports involvement of President-Elect Donald Trump later next week.”

It could be argued that there is some news value to this Obama coverage on MLK Day. The Cubs will be visiting the White House on Monday, invited by President Obama before his term ends. Sports champions receiving recognition from the president is a ritual that always gets some news coverage. This will be even more of a special occasion with the Cubs breaking their long World Series drought and native Chicagoan Obama welcoming the city’s most popular team (even if he’s a White Sox fan).

Additionally, Obama has been an annual presence on the network during March Madness, filling out a NCAA Tournament bracket with Andy Katz during his eight years in office. Why wouldn’t ESPN celebrate having the president on its airwaves regularly as his term comes to an end?

Some might argue that ESPN aided Obama in reaching its viewership, but the network would hardly be alone in that. Obama has been more visible in pop culture than any other president. Even those who don’t agree with his politics or like him as a president can’t fault him for wanting to fill out a bracket on ESPN and look smart if he gets his picks right. Who wouldn’t want that opportunity? And is ESPN supposed to say no, if the White House reached out? Wouldn’t that also be a political stand?

ESPN’s observance of Martin Luther King Jr. Day will also include several features on Sunday’s NBA telecast of Bulls-Grizzlies from Chicago. Those will include following members of the Memphis Grizzlies touring the National Civil Rights Museum and a special tribute to Dr. King narrated by Bulls star Dwyane Wade to open the broadcast.

On Monday, The Jump will feature interviews with several NBA players discussing Martin Luther King Jr.’s legacy. Among the players contributing will be Wade, Damian Lillard, Paul George and Dwight Howard, as well as athletes in other sports such as Russell Wilson and Dwight Freeney. Those interviews will also be incorporated in programming throughout all ESPN networks, in addition to The Undefeated from Jan. 14 through 16.