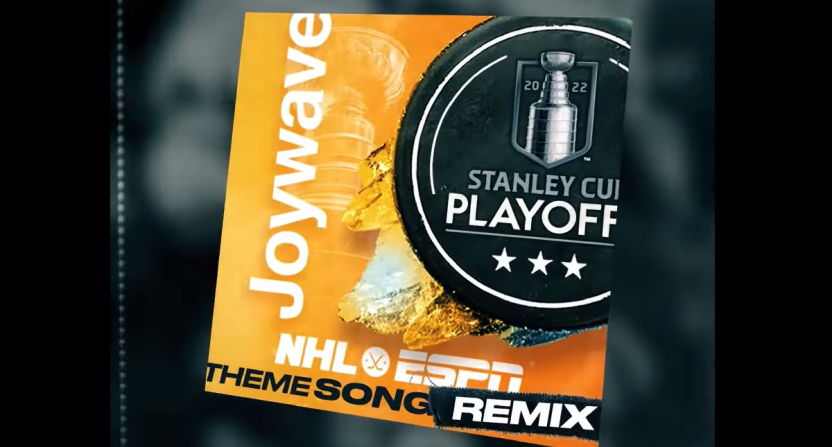 ESPN has the NHL playoffs again, for the first time in nearly twenty years.

To mark the occasion, the network announced today they’ve partnered with various artists to remix their traditional NHL theme for the postseason.

Alternative rock band Joywave, EDM duo Zeds Dead, and producer Murda Beatz (in collaboration with producer signed to him: Foster) are all creating their own renditions of the track to provide the complementary blend of nostalgic character with a refreshing twist that reflects the new era of NHL across The Walt Disney Company.

“The NHL on ESPN theme song is one of those songs that became synonymous with our hockey coverage over the years, so we knew we wanted to celebrate the return of the Stanley Cup Playoffs on ESPN by bringing a unique element to it,” said Lucas Ferraro, Director of Sports Marketing, ESPN. “All three artists did a phenomenal job modernizing the track for today’s fans while infusing the classic elements we all know and love.”

The remixes will debut at different dates throughout the playoffs, leading off with Joywave for Round 1, Zeds Dead for Round 2, and Murda Beatz for the conference finals. All remixes will run across TV in topical spots created for each round of the playoffs, and on social media across ESPN, NHL and artist social handles, as well as on ESPN radio.

You can listen to the first one here, from Joywave:

Music is one of the most subjective things to try and write about for an audience; everyone hears things differently and this one-minute version of an iconic sports television theme is probably going to produce an impossibly wide array of opinions.

All I can do is offer mine: it’s fine. The part where we get, like, what the ESPN theme would have sounded like on the Super Nintendo was a nice bit.

Hopefully the traditional theme remains the predominant force throughout ESPN’s playoff coverage, though. That’s one of the best things about the league returning to ESPN, and that’s not a slight to the rest of ESPN’s coverage. It offers a lovely mix of nostalgia and timelessness, and it’s hard to improve upon it in any way. But maybe I’m just old.

Though both things can be true.