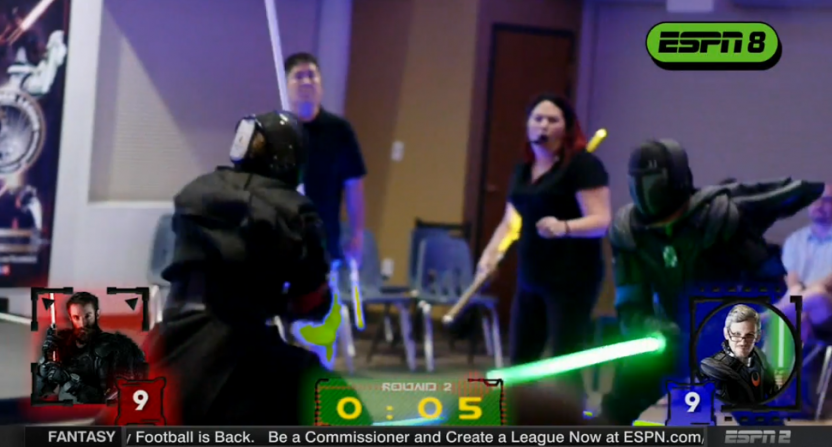 With it being 8/8, ESPN has again turned ESPN2 into “ESPN 8: The Ocho,” and they’re spending a whole day showing unusual sports with both competitions and feature pieces.  So far, that’s included everything from trampoline dodgeball to kabaddi, plus features on knife-throwing, cheese-rolling, catfish noodling, lawnmower races, jousting and more. But the strangest broadcast of all might be The Saber Legion, competitive dueling with “LED sabers.” (Toy lightsabers, but without Disney’s trademarks.)

The event, featuring two contestants in what look like hockey pads swinging away at each other in front of what looks like a conference room with 20-30 fans (the event took place June 16 at Eagan Hills Church in Eagan, MN), had just some incredible broadcasting moments. Let’s start with the Kenny Mayne/John Buccigross intro, complete with the ESPN 8: The Ocho logo dressed up as Star Wars characters:

In addition to their Ocho anchoring, Buccigross and Mayne have been doing fake bits all day as KFC ads, covering people competing in sports with KFC buckets on their heads. At first, this seemed like it could be one of those. But no, it’s real.

As broadcasters Jared Graham and Thor Borger said in their intro, this is “hard-hitting, intense, real saber combat”:

It got even better from there. Let’s go to sideline reporter Terry (his last name isn’t mentioned on the broadcast, but judging by interviews elsewhere, this appears to be Saber Legion co-founder Terry Birnbaum) with contestant Kevin Cook:

It’s great how that interview like it’s going to end after one question with a “Thank you, Kevin,” but then proceeds to a second question. But the cut to the second interview is even better, as are the responses from contestant Jimmy Sourile (previously dubbed “The Pastor” by the announcers, he is actually the church’s pastor of worship and student ministry).

First, here’s him comparing himself to claymation character Gumby, and stunning Terry in the process:

“How are you feeling, mentally and physically tonight?”
“Mentally, I’d say appropriately nervous. Physically, I feel like Gumby, just stretchy and ready to go.”
“Okay. I don’t think I’ve ever heard of that before.”

The off-camera laughter is great too. And Sorrill’s later answers get even better, after he’s asked about what makes him unique:

“I have no fighting experience, so I just do whatever I want to do.”
“Very well said. Okay. What did you do to prepare for tonight’s fight?”
“I fought at every meet I could and every where I could fight. That’s about it.”
“So you just go out there and fight and hope for the best?”
“Yeah, pretty much.”
“This is going to be a unique fight. Jimmy, what is your ultimate goal tonight?”
“I’d say to do my best. I’d love to win, but Kevin’s really good. So I want to put on a good show, have a ton of fun and go as hard as I can go.”

During the actual fight, the tip of Jimmy’s saber got cut off, complete with “We’ll see if this puts a crimp in his style or if it causes his motivation to stall” commentary from Graham.

But Jimmy won, and gave a great post-game interview:

“That’s awesome.” It is indeed.

Later on, in another interview, we have contestant Jason Newing filling Terry in on who he’s fighting (Ryan Kappes), and explaining that he had watched and fought him before. And then he provides a disclaimer to his previous win over Kappes: “I beat him with a pike versus a crossguard, which I don’t really feel was the most fair fight.”

And there were amazing moments during the fights too, including Kappes’ hilt breaking in the final seconds of the single-saber duel, but him then scoring with his replacement saber:

Let’s end this with Kappes’ final interview and with the closing montage:

That’s going to go down as one of the most unique things ever shown on ESPN. And hey, we’ll take it over the SportsCenter special on the “The Evolution of the Lightsaber Duel.”