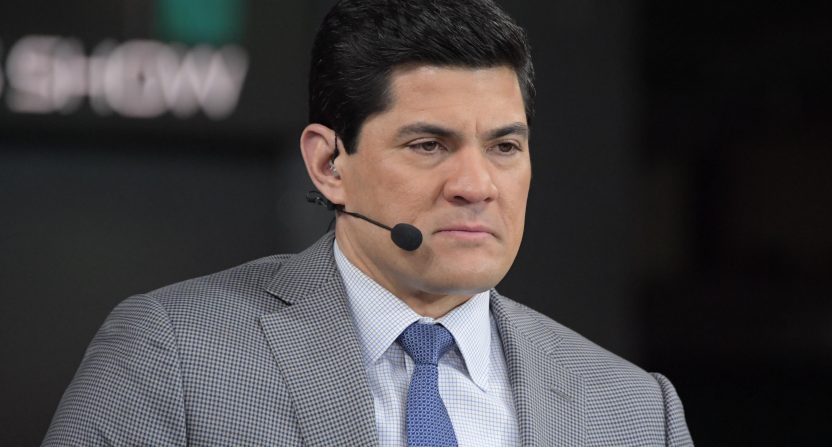 NFL coverage on ESPN will look quite different this year. The network had several changes to its NFL personnel this offseason, including February’s news that Charles Woodson was out, Bill Polian’s March retirement from the network, and Darren Woodson’s May exit to focus on his real estate business. And now, they’ve announced what their studio coverage will look like, which will include Tedy Bruschi (seen above in 2017) joining the Sunday NFL Countdown crew and Louis Riddick moving to the main Monday Night Countdown set (Charles Woodson used to be featured on both of those shows) and Adam Schefter travelling to the site of Monday Night Football to contribute to the on-site Countdown show. Here’s more from ESPN’s release:

…Riddick, who will call his first NFL game as part of ESPN’s Monday Night Football doubleheader on Sept. 9 and provide game analysis during Friday night college football games this fall, will now join the Monday Night Countdown main set, beginning in Week 2. Also new this year, Schefter will now travel to MNF games each week where he will be part of Countdown.

It’s interesting to see Bruschi joining Sunday NFL Countdown. Some figured ESPN would hire from outside to replace Woodson there, but instead, they promoted someone who’s been at the network for over a decade. It’s also notable to see Riddick featured more on Mondays; he’s been seen as a rising star at ESPN for a while and signed a new extension with them last May despite not being selected for the Monday Night Football booth (a role he lobbied for), and they’ve responded by featuring him further on draft coverage, the MNF doubleheader, and now Monday Night Countdown.

Meanwhile, sending Schefter out to Monday night game sites should help integrate him there further, and the ESPN release also notes that fellow insider Chris Mortensen will have an expanded role on Monday’s studio shows in Bristol, including NFL Live and two editions of SportsCenter. We’ll see how this all shakes out for ESPN. But they certainly can’t be accused of sitting pat.